This may be the Pac-Man you're looking for, and we added a twist to demonstrate the versatility of the Photon microcontroller!

Pac-Man on a Phone - Jedi Hand Controls with a Photon

Pac-Man on a Phone - Jedi Hand Controls with a Photon

This may be the Pac-Man you're looking for, and we added a twist to demonstrate the versatility of the Photon microcontroller! 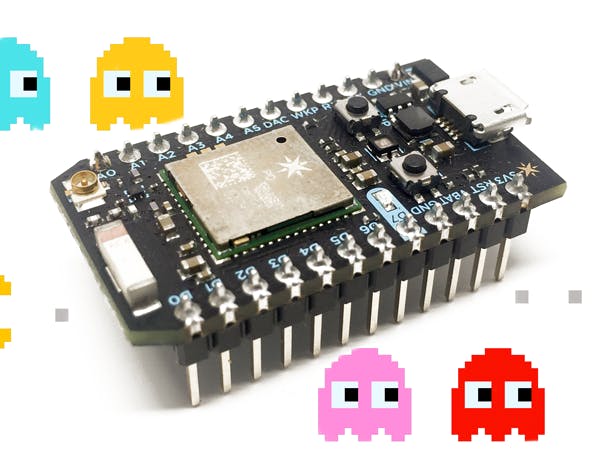 This tutorial shows you how to use hand movements (and a cleverly palmed Photon) as a game controller,  running a Pac-Man app on a Android or iOS device over a local WiFi. Remember those garbage mashers on the first Death Star? An underlying purpose is to also introduce you to hybrid app development, and give you a starting point to make your own projects based on WiFi and the Photon. We've stacked our microcontroller with an IMU shield that will be used to control Pac-Man himself in the game.

In order to make the most of this tutorial you'll need a Particle Photon and a smartphone (iOS/Android). I will also assume that you are familiar with Particle Build. If you’re not, Particle provide an excellent introduction on their web page to bring you up to speed.

The basic Pac-Man app (controlled using arrow keys on a PC-based browser) has been rewritten entirely in HTML5 by Platzh1rsch,  developer of the pacman-canvas application. This project tutorial is based on this legacy work, as found in this repository.

This update from earlier editions of the Photon includes a 120 MHz (STM32F205) microprocessor and a 6x RAM from previously being 128 KB. The development board is also equipped with both DAC and CAN, features fairly unusual to this kind of development board.

In short, the team behind Particle has developed an impressive and thought-out offering, where the development environment is mainly cloud based (Particle Build) although more experienced users may choose to opt-in for the “offline” Particle Dev software.

SparkFun were kind enough to provide a Photon and a couple of their shields. Among the shields I got my hands on were the Battery Shield and the IMU Shield. Ever since I begun developing examples using Evothings, I have thought that it would be interesting to try to add connectivity and external controls to an already existing, and normally stand-alone mobile application. And being written in HTML5/JavaScript, it's good to go on both Android and iOS using Evothings Studio software.

You can browse the source code for this tutorial in Evothings GitHub repository.

Also you will find Platzh1rsch pacman-canvas in its original version in his GitHub repository.

In order to follow this tutorial I assume that you are familiar with Particle Build. You need the following hardware:

The first, and most simple step in this tutorial, is hardware preparation. Simply put the shields together and you are ready to start coding. I prefer to put the stack on a breadboard to minimize the risk of unintentionally shortcut any of the exposed pins. You can view my stack in the picture below.

As stated earlier I assume that you are familiar with Build, so we'll dive directly into the code. The complete source code described below can be found on the Github repository.

The objective is to build a small server on the Photon. When a client connects to the device, it will begin sending data in JSON format containing acceleration values to a connected client. We also need to configure the shield so that it communicates using the I2C bus. In this tutorial I will assume that the Photon and the smartphone are connected to the same local network. Yet with some additional networking skills,  our example can be expanded to be usable over the public internet if one is interested in that.

In the code we have included the SparkFunLSM9DS1 library that allows us to communicate with the SparkFun IMU Shield, along with some #defines which can be used to tweak the application to fit specific needs. In this case we assume that it is left untouched. The next step is to define the server and client which we use to communicate with clients over the WiFi-connection. And lastly we define the imu  which is our interface to the IMU shield.

Inside setup() we enable the serial communication that we will use to print the received networks settings. Then we start listening for TCP connections by executing the server.begin() method. The IMU shield is initiated after some settings have been updated. Now we have configured and initiated the serial connection, TCP server and the IMU shield.

The following part covers the loop() function that is executed continuously on the development board.

The application main if-else statement checks whether or not there is a client connected to the development board. If there is a client present, the application starts to discard data not yet read by the client by executing the  client.flush() method. Then the software takes control of the RGB LED and defines a color that will be used to signal if there is a client connected to the development board. The imu.readAccel() method updates the internal data structures containing the latest acceleration data fetched from the shield. This method is called before calling the imu.calcAccel() method in order to get the latest sampled acceleration. The next step is to define a buffer that we fill with a JSON-object containing the latest acceleration data. Each time before the buffer is transmitted to the client by calling the server.write() method the RGB LED on the development board is flashed.

Before we're done with step 2, I'll need to compile and flash the software onto your development board and open a serial connection to the board, send any data to the board and note the network information. Note the IP of the board, we will use that later in the mobile application.

The complete source code described below can be found on the Github repository.

Fetch the pacman-canvas commit 3c24c7a995b1e329c5849ac24421eedfc1d70474 from GitHub. Unzip the application and open the files index.htm and pacman-canvas.js in an editor of your choice. These are the only two files that we have to edit in order to achieve our goals. Let’s begin with index.htm .

The first thing that we will do is to remove some code snippets that we don’t need. Remove the code from the following sections:

The reason that we remove the Highscore section is that it is implemented using the PHP scripting language, which is a technology not supported for executing an application in a mobile client context. Locate the<div> with the id menu-button and delete the following code:

The next step is to add the code snippet below just before the </head> tag.

This code redirects every console.log()  call to Evothings Workbench special function hyper.log() in order to debug applications back to the Tools section of the Workbench. The rest of the snipped includes a required Cordova-specific library.

The final item on the list  is to add two buttons to the main menu. One that we will use to connect the Photon and one that will take us back to the start screen. Locate the <div> with the id menu-control and add the following code:

There is nothing left to edit in the index.htm at this point. Press Save and so move on to editing thepacman-canvas.js file. As a first step, we are going to create an object that will represent the Photon. At the top of the file, right after the declaration of the global variables add the following code snippet, don’t forget to add the IP of the Photon:

The method connect()  tries to connect to the development board using the defined IPAddress and port . This method is basically a wrapper for the chrome.sockets.tcp.create()  that ensures that the application only is connected to one development board.

The receiveData()  function is executed each time there is new data received. The first step is to convert the received data to a JavaScript object from which data can be extracted. The second step is to adjust the direction of the pacman depending on the values of the acceleration.

The function adjustPacmanDirection() changes the direction of the pacman figure in the game as well as updates the arrows to show which direction the figure is heading at the moment.

Declare a variable named photon among the global variables by adding the following code on the line below the declaration of the variable mapConfig .

The next step is to define the variable photon. This is done by adding the following code just below the definition of the game variable (game = new Game() ).

The next and final step is to add initial callbacks to the buttons we added to index.html earlier in this tutorial. The best place to declare this would be in the $(document).ready() method, since the DOM has to be fully loaded before we can add the callbacks. Locate this method and add the following code where the other buttons callbacks are defined.

That's it, you should now be able to press Run in the Evothings Workbench and set Pac-Man to work on your Android or iPhone.

It was fun to work with the Particle Photon.  I will definitely use the development board as a base in future projects. Using Evothings Studio, I managed to develop the application in one go.

Time for you to start exploring the exciting world of mobile IoT applications.. Download Evothings Studio and start developing your own IoT apps!