A real-time blink in a IoT platform that's easy to use and easy to understand.

A real-time blink in a IoT platform that's easy to use and easy to understand. 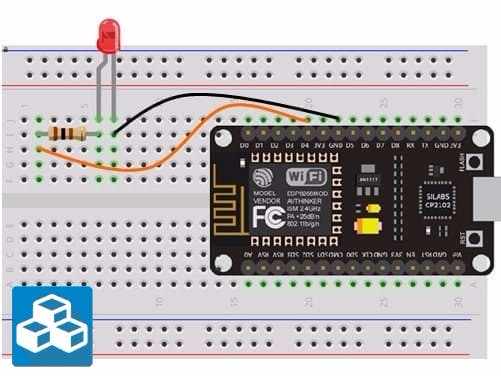 This example shows the simplest thing you can do with thinger.io to see physical output: it blinks one LED with any device connected to the Internet.

We are going to use Arduino IDE (the latest version is on www.arduino.cc) and a NodeMCU development board.

The hardware required to build the circuit is the following:

Access to the Platform and Configuration of a Device

The very first step to work with thinger.io is to sign up in the platform, giving a user name, email address and password. You will receive a message to confirm the email address and once it's done you can access and start using it.

After you have signed in, you have access to the console dashboard, in which graphically, you can see the account stats (with the number of devices, dashboards data buckets and endpoints used), the location of the connected devices and a the data transmission made by the devices (data transmitted and received).

CONFIGURATION OF A DEVICE

To configure the connection to a device using thinger.io is quite easy. Select Devices > Add Device and fill the three requested fields:

If you’re following this project, it's time to fill the three fields:

It's done. If you click Statistics, you can go back to the console dashboard and you will see that the device is added.

Arduino IDE: Installation of the Thinger.io Library and Upload of the Sketch

INSTALLATION OF THE THINGER.IO LIBRARY

To install thinger.io library into your Arduino IDE you can use the Library Manager. Open the IDE and click to the “Sketch” menu and then Include Library > Manage Libraries.

Now you can use the thinger.io functions in the Arduino IDE!!!

UPLOAD OF THE SKETCH

This is the sketch that we are going to use:

It's necessary to change the “Thinger.io connection parameters“ and make them match with the data used when we made the device in thinger.io.

It is also necessary to change the WiFi SSID and WiFi password and make them match with your own WiFi network.

Once the changes have been done, you can upload the sketch to the NodeMCU.

A QUICK LOOK AT THE CODE

The on/off function has the following structure:

TURNING ON AND OFF THE LED

TURNING ON AND OFF THE LED FROM thinger.io

To turn on and off the led from thinger.io, open the platform and click Devices and then your device -NODEMCU_LED-.

Then the device will open.

Then click on View API and LED-Private. Once it´s done you can see the switch to turn the LED on and off.

TURNING ON AND OFF THE LED FROM THE thinger.io APP (Only for Android)

The first step is to install the APP on your tablet, smartphone… you can find it in the Play Store for Android.

Open the -NODEMCU_LED- device and click Add into the Device Tokens.

Write a representative name about the use of the connection in the Token name field, and click Ok > Show QR Code.

Open the APP and click “+“. Then scan the Device QR Code.

Click in the device and you will see the switch to turn the LED on and off.