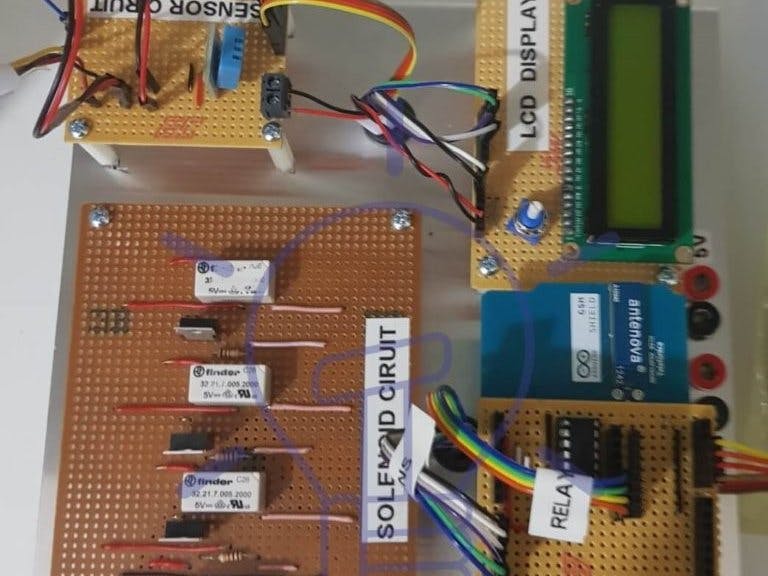 In daily operation related to watering the plants are the most important cultural practice and the most labour-intensive task. No matter whichever weather it is, either too hot and cold or too dry and wet it is very crucial to control the amount of water reaches to the plants. So, It will be effective to use an idea of automatic plant watering system which waters plants when they need it. An important aspect of this project is that: “when and how much to water”. To reduce manual activities for the human to watering plant, an idea of plant watering system is adopted. The method employed to monitor the soil moisture level continuously and to decide whether watering is needed or not, and how much water is needed in plant’s soil. This project can be grouped into subsystems such as; power supply, relays, solenoid valve, Arduino GSM shield, Soil moisture sensor and LCD.

Essentially, system is design and programmed in such way that soil moisture sensor senses the moisture level of plants at particular instance of time, if moisture level of sensor is less than the specified value of threshold which is predefined according to the particular plant’s water need then the desired amount of water is supplied till it reaches to the predefined threshold value.

System reports its current states and sends the reminder message about watering plants and to add water to the tank. All this notification can be done by using Arduino GSM shield.

Aim of the Project:

Since nowadays, in the age of advanced technology and electronics, the life style of the human should me smart, simpler, easier and much more convenient. So, therefore; there is a need for many automated systems in human’s daily life routine to reduce their daily activities and jobs. Here an idea of one such system named as automatic plant watering system is very useful. As many people are facing a lot of problem watering the plants in the garden, especially when they away from the home. This model uses sensor technologies with microcontroller in order to make a smart switching device to help millions of people.

In its most basic form, system is programmed in such a way that soil moisture sensor which senses the moisture level from the plant at particular instance of time, if moisture level of the sensor is less than the specified value of threshold which is predefined according to the particular plant than the desired amount of water is supplied to plant till it’s moisture level reaches to the predefined threshold value. System involves humidity and temperature sensor which keep tracks the current atmosphere of the system and has an influence when watering happens. Solenoid valve will control the water flow in the system, when Arduino reads value from moisture sensor it triggers the solenoid valve according to the desired condition. In addition, system reports its current states and sends the reminder message about watering plants and gets SMS from the recipient. All this notification can be done by using Arduino GSM shield.

In the final pdf report (free downloadable link is given at the end of the post content), the following sections are described in details.

After getting all the hardware and software design done successfully it’s time for the project construction and testing. In this section of the report, details will be given on how the different hardware design gets implemented and tested. This section also talks about if there was any hidden problem within the software code that was important to troubleshoot and evacuate and to build the project successfully. the step by step process can be seen in the full project report in pdf file given below such as construction and testing procedure.

As all the testing done with satisfactory result. Since there is no as such particular result that has to be documented. As the system works with moisture and DHT11 (temperature and humidity) sensor which takes reading according to the current room temperature and humidity. Readings from the moisture sensor in the circuit also depend on what the current moisture level is for the plant. Otherwise, overall result coming out from the circuit in terms of functionality was good for motivation.

Related Post: Arduino PWM Programming and its functions in Arduino

For better view of the code, check the PDF file in the source link.

Related Post: How To Design a PCB (Step by Step & Pictorial Views)