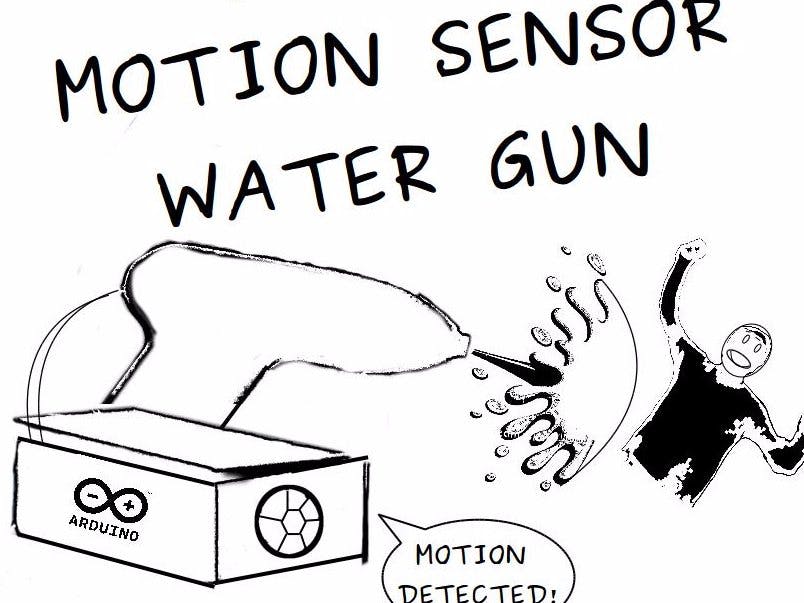 I wanted to replicate Tinkernut's project but the problem was that I could not get my hands on a Raid Auto Trigger because it is not available in China where I was living. However, a quick search on Taobao.com led me to discover this interesting product:

for the lazy gardener

Very similar to the Raid Auto Trigger and at the reasonable price of ¥78.80 I decided to purchase one. It turned out to be considerably easier to hack since you did not need to tamper with any of the internal components. You only needed to modify the push button so that it was breadboard/Arduino compatible. If you happen to live in China (or if Taobao ships to your country) you can purchase the squirt gun here.

We turned this into a workshop, hence all the powerpoint slides and big text.

cute drawings were copied from the "Soldering is Easy" comic book

STEP 2: Interfacing with the Arduino

Set up and test the PIR motion sensor with the Arduino Nano.

Use the serial monitor to check that it's working, and then it's time to connect the water gun.

in some cases, connect the red wire to the right transistor pin and black wire to the left pin

And with that you should be have a working motion-soaker! We used a laser cutter to make a wooden enclosure (since it's very fast and we needed a bunch of them for the workshop), but you could use a 3D printer as well.

makeabox.io is a good website for creating laser-cut enclosures

Keep in mind, I have put in a 10-second delay in the code so as to allow the motion sensor to calibrate.

2 projects • 4 followers
Avid hardwarian and wantrepreneur. Been tinkering with Arduino since 2011. Born in Hong Kong, raised in Shanghai, now living in Sydney.
ContactContact
Thanks to lady ada, Kristian Gohlke, and Andie Nordgren.