Visualize the DCF77 radio signals with this clock.

Visualize the DCF77 radio signals with this clock. 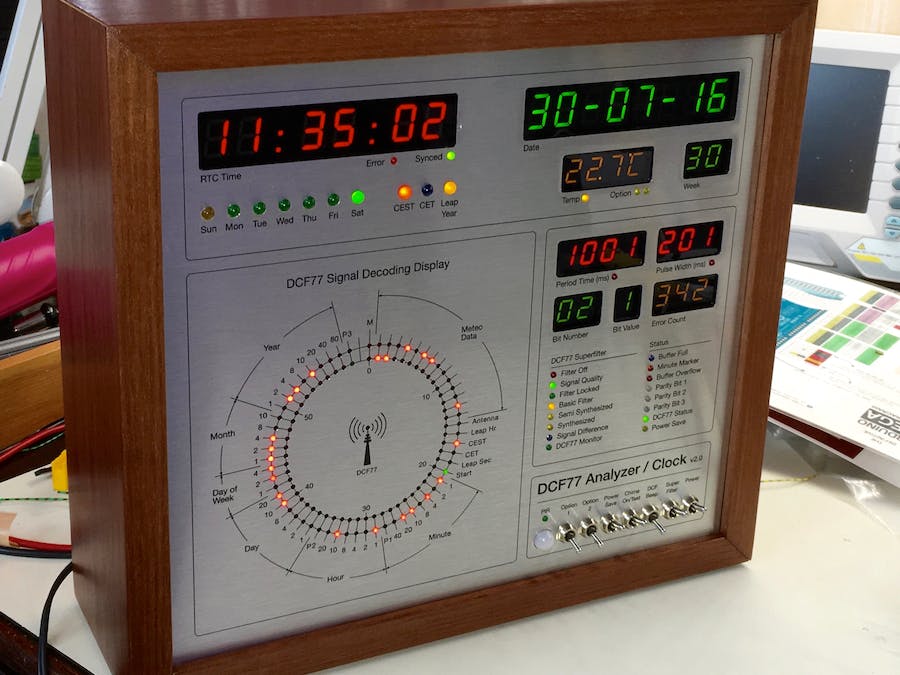 After discovering the Arduino platform, I was amazed and my dream of one day developing my own electronics became true.

As anyone will do, I started with the basic sketches but soon I wanted to make something useful. As I always loved Radio Clocks (they synchronize with the DCF77 signal from Germany in my case), I decided to make a clock which did not only show the time but a clock which shows me what is going on.

After hundreds of hours tinkering, making uncountable mistakes, I finally had a working clock with my own code and printed circuit board designs.

But later I discovered the DCF77 superfilter from Udo Klein which provides a clean signal when the radio signal is not so good.

This is a separate Arduino Uno board with the Superfilter software, (you can look at it as a stand alone 'black box', filtering the signal) connected between the DCF77 antenna and the Arduino Mega running my sketch.

Photos and videos of the new DCF77 Analyzer/Clock v2.0:

The front panel and casing:

The design of the front panel was made in a freeware program called Inkscape (see the download URL at the beginning of this page).

Actually producing the front panel proved to be the hardest part. I spent a lot of money trying to make it at a local FabLab using a laser cutter and a special kind of Acrylic with an aluminium like coating. The idea was to cut the holes with the laser and engrave the text and lines by burning away the very thin coating exposing the black acrylic below. But this was a nightmare as the laser cutter was not able to produce within the tolerances I needed due to heavy use and 'abuse' by many users.

Then I came across an online Photo service. They print on all sorts of materials and one of those was a DiBond panel. The price was very good, 28 Euro's including postage. But the result was at first disappointing because they did not print my design 1:1 but slightly enlarged. So beware if you decide to use this method. Call them first and ask if it is possible to print 1:1.

After a phone call they sent me another panel with the right dimensions. It was better than expected, excellent!

Then a lot of drilling and routing was needed:

7 projects • 127 followers
No electronics education but enjoying my new found hobby. Never thought it would be possible to make things myself but here we are...
ContactContact
Thanks to Udo Klein.