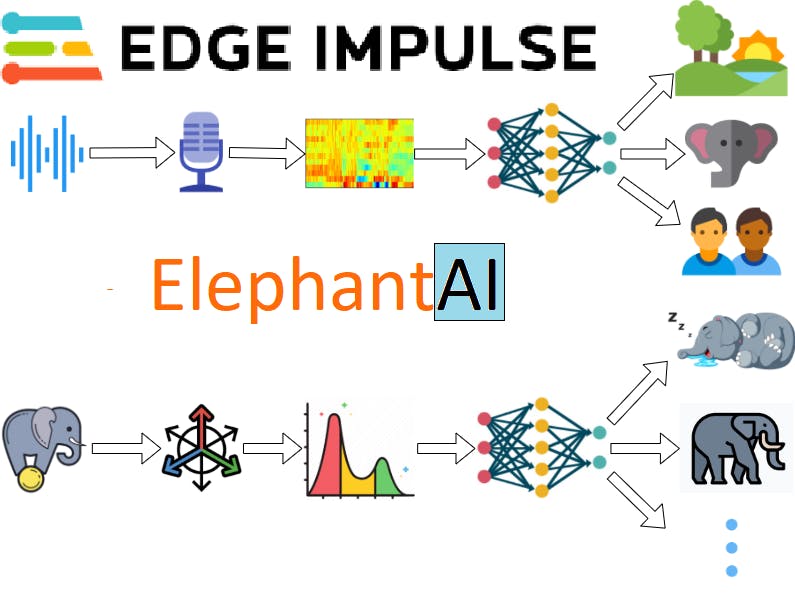 The world we live in is not a Disney movie where animals (excluding homo sapiens) live in harmony with no human intervention. Animal extinction is real and as many as 99% of the species at the threshold of extinction are there due to our (human, and that includes you too) activities[1]. Elephants are facing the same problem. these gentle giants are being hunted for their ivory tusk and fun.

With the help of technology, we can solve this problem. Technology can help in preventing elephant poaching. It can provide insights for their conservation.

A solution we present here is a machine learning algorithm designed using Edge Impulse Studio. This algorithm is designed to be deployed on an elephant tracking collar by Smart Parks. The tracking collar is developed by IRNAS and has a lot of sensors built into it. Two of those sensors are a microphone and an accelerometer.

We have developed two machine learning algorithms to use these sensors and provide useful information. The algorithms are

Both of these algorithms work independently. They take input from different sensors and generate two distinct outputs.

This algorithm uses sound to detect the presence of a human. The MEMS microphone(step 2) of the tracking collar will pick up sounds present around an elephant and will send it to the preprocessing algorithm(step 3). This preprocessing algorithm generates MFCC of that sound clip. The generated MFCC is then sent to a Convolutional Neural Network(step 4). The convolutional neural network with the help of a fully connected neural network classifies the audio into three classes(step 5)

Based on the classified class a smart park manager can decide on what to do next.

We gathered voice samples from multiple places and prepared the dataset for training and testing. Our voice dataset contains three classes

Thanks to Elephant Voices for providing Elephant's voice dataset. Human and Other class data are captured from Youtube.

We uploaded the training and testing data to the Edge Impulse via its Data Acquisition feature. We cropped and split the samples to remove unwanted sounds.

This cleaned data is then preprocessed on Edge Impulse to generate MFCC. The generated MFCC can be visualized using Feature Explorer in Edge Impulse

The Neural Network we developed for sound classification is a combination of CNN and Fully Connected Network. Building and configuring a neural network is very easy in the Edge Impulse. You only need to add a Neural Network classifier block while creating the impulse. You can modify its architecture and configure hyper-parameters from the NN classifier tab under Impulse Design.

We have tried multiple combinations of network architecture and data augmentation about which we will discuss in the next section. Before that let us point out the assumptions and some pre-settings.

We experimented with various Convolution Neural Network (CNN) architectures possible in Edge Impulse and analyzed the performance both in terms of accuracy and resource usage which are discussed in this section.

1 / 2 • Figure 9: Network architecture with a CPD block with 1D convolutions

Figure 10: Variation in accuracy and hardware resource usage with complexity of the neural network

In Figure 10 we show how increasing the complexity and 'deepness' of the neural network affects resource usage like inference time, RAM, and ROM usage which are important numbers when talking about inferencing on edge devices which are low in both power and compute.

So, from the above observations, we conclude that the best architectureinthis set of experiments is the one with 3 CPD blocks with 85.78% test accuracy, 16 ms. of inference time, 8.3 KB of RAM usage, and 68.9 KB ROM usage.

1 / 2 • Figure 11: Network architecture with a CPD block with 2D convolutions

In this part, a CPD block from the previous section is modified to contain a single convolution layer with 2D convolutions, 3x3 kernel size, and the number of neurons (filters) in multiples of 4 (starting from 4).

Figure 12: Variation in accuracy and hardware resource usage with complexity of the neural network

In Figure 12 we show how increasing the depth of the network by appending the CPD block of 2D convolutions affects the resource usage and performance of the model.

So, from the above observations, we conclude that the best architecture inthis set of experiments is the one with 4 CPD blocks with 86.19% test accuracy, 42 ms. of inference time, 10.3 KB of RAM usage, and 43.7 KB ROM usage.

Figure 13: Network architecture with varied number of convolution layers in each CPD block

In the second set of experiments, we used the network architecture depicted in Figure 13 where the number of convolution layers before the polling layer inside a single CPD block is varied keeping the number of neurons the same. There are two CPD blocks first with convolution layers of 8 neurons and the second with 16 neurons. We discuss performance metrics related to these settings below.

Edge Impulse provides settings to add up to 3 contiguous convolution layers and we report results on these settings in Figure 14.

So, from the above observations, in this set of experiments, the best model is the one with 3 convolution layers (before the pooling layer) with 85.02% test accuracy, 30 ms. inference time, 10.2 KB RAM usage, and 79.4 KB ROM usage.

In this set, we tried different data augmentation settings in Edge Impulse and report their effect on the accuracy of the model. Here we used the same architecture depicted in Figure 8 with one convolution layer.

With the obvious increase in training time, the decrease in the test accuracy with data augmentation, however, came as a surprise as shown in Table 3. We did not try to add noise as the original audio samples contain natural background noise at many time frames. We vary masking of frequency from none to high with the warping of the time axis in one of the settings. Evidently, data augmentation has no effect on inference time and hardware compute usage.

This algorithm uses an accelerometer sensor to detect the elephant's activity. The sensor gathers the acceleration in the X, Y, and Z axis (step 2) and sends it to the preprocessing algorithm. Spectral analysis is performed on the acceleration data at the preprocessing step(step 3). This preprocessed data is then fed into a Fully Connected Neural Network(step 4). The neural network then classifies the data such as

Note: The attached neural network model is trained only on 3 types of activity data (a) standing, (b) walking, and (c) other.

Data is collected for 3 activities:

Each sample in the dataset is 10 seconds long and the device was placed in the front trouser pocket while collecting data.

The data is then preprocessed using the Spectral Analysis block in Edge Impulse itself.

The neural network used for activity classification is extremely simple. The network contains only four fully connected layers constituting an input layer with 30 neurons, two hidden layers with 20 and 10 neurons respectively, and one output layer with 3 neurons. We used the learning rate of 0.0005 and trained the network for only 30 epochs.

The ReLu activation function is used for hidden layers and to optimize the network Adam optimizer is used.

The neural network model we developed for activity monitoring performed extremely well. The training and test accuracies we received are almost 100%, too good to be true!

The developed neural network model can be found here.

By looking at the set of experiments performed for both the algorithms we present our final conclusion here.

By looking at table 4 we can say that for the "Human Presence Detection", the best model is "Three 1-D CPD blocks and a Dense Layer" because it outperforms other models in terms of RAM usage and inference time and has only 0.41% less accuracy than the most accurate model.

For our voice dataset and models, the data augmentation did not have any effect.

For "Elephant Activity Monitoring" our fully connected network described in section 4.2 is performing best with 99.47% test accuracy however it is trained/tested on the human activity data and not on elephant activity data. To train and test this model we will need activity data of multiple elephants.

3 projects • 30 followers
I like to make things which can walk, talk and see.
ContactContact