Inspired by the epic game "The Room", this part-clock, part-board game will intrigue you like a moth to a flame!

GoonieBox! Can you solve the riddles?

GoonieBox! Can you solve the riddles?

Inspired by the epic game "The Room", this part-clock, part-board game will intrigue you like a moth to a flame! 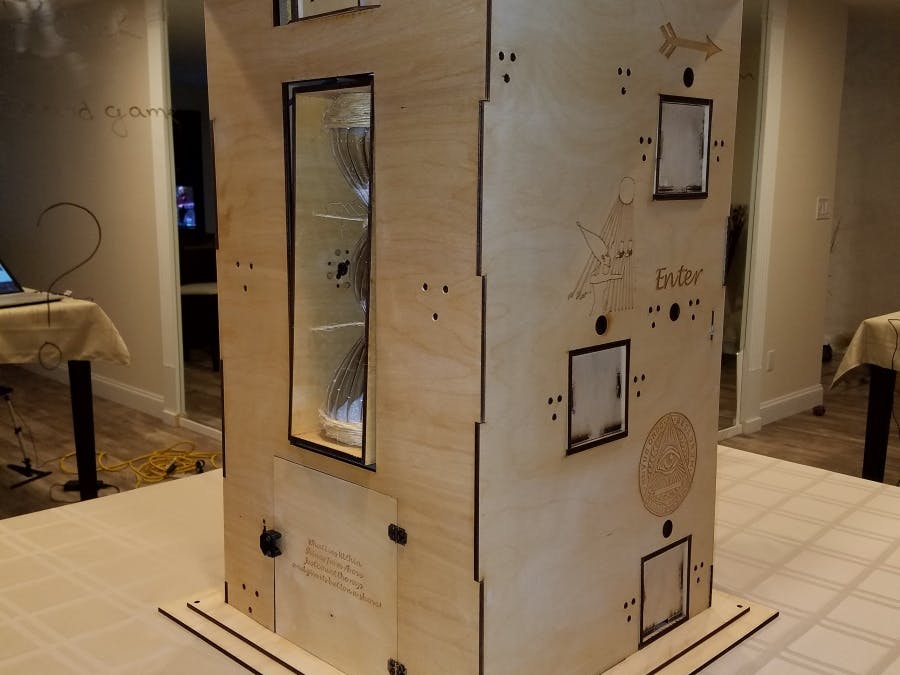 My name is Guido Bonelli Jr., inventor/designer, nay, MAKER! Creating is woven into my soul like the oceans entrenched in every cavity of the planet. Of particular interest is creating interactive playable artwork. You see, I love puzzles! If I could, I would laser cut my toast into a jig saw puzzle every morning. Technically, I guess I could, but seems like overkill for a laser cutter. Any who, I’d like to share with you my latest Arduino build, inspired an epic puzzle game "The Room" by Fireproof Games.

Much like my previous build (“Orbis, the Amazing Kinetic Sculpture”), I wanted to create a unique piece of furniture for my home which my guests could interact with. This time however, I wanted it to be something which I wouldn’t have to explain how it worked. Instead, I wanted mysterious scriptures scribbled all over the sculpture to intrigue my guests. To lure and enchant them like a moth to a flame. But where would I come up with something like this? I needed a muse.

What inspired me was a puzzle from the first installment of the game “The Room”. If you have never played it, after reading this blog post head immediately over to Google play or the Apple store and download all three games. They are jaw dropping in graphics, mind bending in puzzles and infinitely unique in game play. Behold... here is the puzzle which inspired it all.

The Puzzle which inspired Goonie Box

Could you imagine walking into a room and seeing this intricate piece of furniture sitting there with unassuming elegance? Adorned with buttons, gears, and secret doors hidden throughout its structure screaming to be inspected. Immediately upon playing the game I thought, “I must build one!” It wouldn’t be until years later that I came up with a design worthy of this puzzle.

Fast forward to December of 2015 where I was looking for a new couch. While looking, I happened upon a very curious clock. For those who know me, mechanical clocks are something of a wonder to me. This was no ordinary clock however, it stood over 6 feet tall, made of solid metal and a giant hourglass in the middle. As I walked around the clock, I touched the steampunk-esque metal wheel and to my surprise, it moved! Not only did it move but actually turned the massive hourglass in the middle. In a flash before my eyes, I began to conceive an idea which would meld my love for clocks and puzzles in one unique piece of furniture.

As the idea began to rummage through my head like a badger burrowing deep into the earth, I started to imagine how I could incorporate an hourglass into my design. After a scouring Pinterest, Facebook, and the very bowels of the interwebs (scary stuff down there) for the perfect hourglass, I had found one! It was carried by a store called Anthropology. Then, like a “Space X rocket”, I hurled my body towards the closest brick and mortar store. Success, they had it in stock! An hour glass wouldn’t be enough to tell time though, it needed to display the hours as well. I didn’t want to simply surround it with numbers and point to it somehow. The thought of making another infinitely gyrating, number hunting arm built into my Mona Lisa was not appealing. Then it hit me! It needed to have a Roman numeral dial with hint of RGB back lighting of course! Duh, right? I KNOW!

As the outer box started taking shape, I realized that there was plenty of room to contain “stuff”. But what kind of “stuff”? Well… puzzles, of course. My eyes started darting back and forth conjuring images of thoughts long since passed. In a flash of brilliant white light, an old 35 mm film reel began to churn in my mind. It was from my favorite child hood movie. GOONIES, “Sloth love chunk!” Still to this day, that movie makes my inner child want to grab the nearest ruler and shake it in the air like a pirates sword. Whilst screaming for your neighbors buried gold. “Arrrrggggg!”

P.S: Not advisable in a cubicle environment. People think you’re the weird one.

With that, I decided to make my half clock, half board game, half furniture piece, a treasure hunting game! Complete with lasers, skeleton keys and shhhhhh a treasure vault. Oh, and while we are talking about goonies… When are we getting a remake Mr. Spielberg?

Finally, as with all of my creations, the name was key (pardon the treasure hunting pun). She would come to be known as “GoonieBox”. None of this would have been possible with the Atmega2560. It is how GoonieBox performs the magic. There are 2 extremely powerful motors being controlled by PWM. Approximately 60 Neopixels for lighting affects. To control the puzzle boxes I amusing 5 servos. Here is a video of the insides! I hope you enjoy GoonieBox as much as I enjoyed making it!