Minimize the input of human assistance by introducing a system that can aid the visually impaired to perform everyday tasks.

Minimize the input of human assistance by introducing a system that can aid the visually impaired to perform everyday tasks. 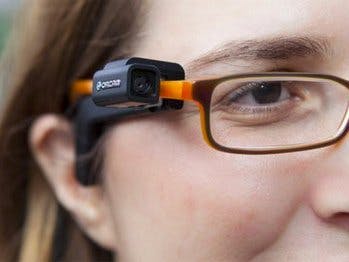 Even after decades of modernization, the visually impaired individuals of today’s world still need to rely upon external help to perform even simple tasks. Although many efforts have been made in the past in order to improve their capability, we still don’t find many such individuals who trust the current technology and go to the supermarket by their own to buy the day’s groceries, while finding their way around and achieving this without the help of any other individual. While this was just an example, the fact is that due to damage to the sense of vision, such people simply aren’t able to localize themselves accurately in a world, thus reducing their capabilities, and their self confidence to a great extent too.

Aim is to build an assistance system for visually impaired citizens so that they can navigate around in the environment using feedback from intuitive sensors. It is a combination of a smart walking stick and a wearable step counting sensor array, altogether interfaced on a IoT enabled development board and Hologram Nova platform. And to top it all, the project is designed with Internet at its heart which is not possible with Hologram Nova. Several ingenious nifty features have been incorporated into the idea, and in its complete form could prove to be a great help to the niche of users it is targeting.

After observing the human way of locomotion, came up with use of human Gait analysis and simple Kinematic inversion, a solution to directly get the distance made with each step taken by the human. This data is then fused with GPS coordinates to get more accurate position of the host. For navigation assistance, we have integrated a geonavigation system with wooden stick which is often used by the visually challenged. Simple solution sought is to harness a set of waypoints from current position to destination and for each waypoint get azimuthal heading for the next waypoint. The set of waypoints are easily obtained using google maps api’s and heading from a waypoint to another is calculated. For visually impaired to get notified about its heading achievement, the stick would be deployed with buzzer that would stop beeping only when directed to correct heading from one waypoint to other. It is certain that a digital compass has to be deployed over stick to continuously get the feedback for correction. The project employs modular components (both electronic and software) for independent sensor data collection and crash debugging. Simple user friendly buttons are incorporated for UI navigation and other emergency assistances. The complete setup is wireless and is fabricated for easy fit with the daily clothing. Raspberry pi zero W is used as central processing unit for all the major processing activities and arduino nanos’ coupled with nRF wireless modules are used complementary data transmission across the product. Hologram Nova lies as the major component of the project, without which it won't be possible to connect the host to the internet and thereby world activities.

Once I receive heart components i.e Raspberry pi zero W and Hologram Nova, my plan would be:

Initial steps will involve materialistic activities like procuring the modules, hardware and 3D printed moulds leading to saving of precious time which further implies more time for testing and debugging. Next, Power distribution, communication protocol selection for efficiency, hardware connectivity between modules, will be considered so that finished circuit boards, batteries, coding libraries can be selected beforehand. We have planned to develop the model/project within 3 Stages. Above mentioned initial steps will be carried for each and every Stage separately. Stage 1 will involve developing a skeleton of algorithms and hardware that will turn as base for other stages to develop efficiently. Stage 2 will be inclined towards analysis of data obtained from stage 1 device, filtering and efficient algorithm developing stage so that Idea pitched gets implemented to its maximum possible level. Stage 3 will be more towards fine tuning of thresholds, experimenting in corner cases and finished prototype development which would then eventually used on actual target. The overview is shown in block diagram.