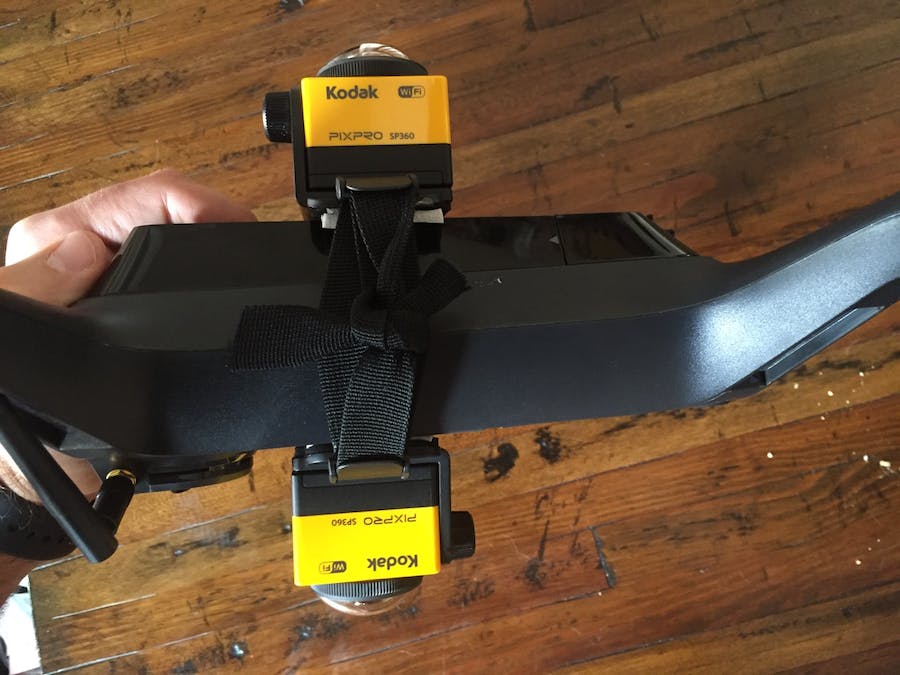 This hack is for people who want to use their Solo to capture spherical video that can then be viewed on YouTube 360 or VR glasses. The trick to doing this right is removing the legs so they do not get captured as they are difficult to remove in the stitching process (trust me, I've tried).

Note: In order to make good spherical video the stitching process can be more difficult than the actual hack and requires some expensive software (i.e. Kolor Autopano + Giga) and while can be learned, is not for the fait of heart.

Follow the Dumb Legs tutorial to remove the antennae in Solo's legs so they can be removed.

Also remove the post in the hard mount. This can be easily done with by removing the hard mount and using the needle nose pliers on the bottom clips, or just pulling very hard (this may break the hard mount for future use).

A ton of vibration gets induced into the cameras through this mount, so any extra isolation helps. In this case some case some 1/4" thick foam is used. Cut them to be the same size as the Kodak L-Brackets found in the Explorer Pack.

3.  Strap the Kodak L-Brackets onto Solo

Use on bracket to go above the battery, and another to go below through the accessory bay. Strap the two brackets into the others clips and tighten down. Adjust the brackets so they are perfectly opposite each other.

This may require some adjusting to get it aligned and then tightened. Once completed, tie the remaining portion of the straps together.

Install the Kodak SP360s onto the L-Brackets using the screw and tighten down. Use the foam box to hold and launch Solo.

5. Take Off and Landing

At this point taking off is still simple if you use the box to fly out of. Landing is a little more difficult. (Currently I fly with a friend and have them hand catch it while I manually kill it using A+B+Pause)

Stay tuned for instructions on installing retracts to help with this part.

Currently the best software for stitching the video is Kolor Autopano Video Pro. It is a powerful software suite that can be difficult to use.  I recommend reading up on how to use that software on the interwebs.

Hands down my favorite way to view videos shot with this setup is in VR goggles. It is fully immersive and gives you the sensation of flying. The best way to share this video is on YouTube 360. Here is a video that I captured with the new Kodak 4k SP360 cameras.