Got a 5 year old and a party to dance to? You can make this interactive LED light that responds to music and sound in a couple of hours!

Make a Light That Wants to Dance with Somebody!

Make a Light That Wants to Dance with Somebody!

Got a 5 year old and a party to dance to? You can make this interactive LED light that responds to music and sound in a couple of hours! 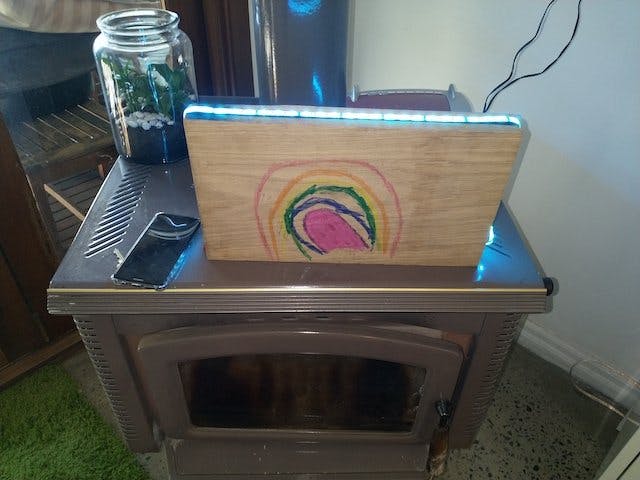 I have this friend. Let's call her “the woman who gives a lot and has all thing things." Or Lois. We could do that too. anyways, she does a bang up big New Year's Party every year and I wanted to make her something for it. Made her some chutney. Made her some cherry ripe balls. Nice... but she is an amazing cook. I know - why not grab a kid who likes being curious and make something nerdy. I had bought a cute little kit that allowed android controlled LED strips, and a spare few hours. This is what we came up with:

Wood: Prepare the surface by planing, sanding and ensure the wood stays freestanding. Drawing / decoration: I find getting someone else to do the drawing or designing of the “thing” (in this case a 5 year old kid’s imagination was great), working out the thing you will use then getting them engaged and involved with the project will make something beautiful. Gather your materials and work out where and how you will place the LED lights. I simply side mounted the LED’s so that they were easy to wrap around the edges and I could quickly tape the prototype together. Measure your LED strip ready for the cutting. Download the Magic Pro app from the google play store or the apple app store. The name of the app is Magic Pro version 1.2.7 on Android Oreo It’s free! Don’t configure just yet ! Hold your horses, we will do that in the assembly bit. I use a seperate phone to my everyday one for this project as I wanted to use a secure wifi network which contained jut me and the phone. This means I could take the device anywhere and plonk it for a dance party and encourage others to use it and watch it anywhere. But there are ways to integrate this device into your existing home network and do all sorts of things with it like wake you up at a certain hour, activate through timers If this then that recipes and google home you can use it via via voice control or all manner of things.Make sure the device works! Plug the whole reel into the magic pro (see note in step two if you don’t have the right strip connector), ensure you have the connectors beteween the LED strip and the unit, and switch the power on. It should immediately light up. Because LED strips get hot very easily don’t leave it on for too long if you’re not going to use the whole strip or unwind it fully to do this. If you would like the test the colours, there is a simple remote that comes with the device. The remote just needs a CR2032 battery which is sometimes included with the unit otherwise your local supermarket or jay has them in stock. You can change the colour and a few bits of basics with this remote so try it out! Gather your tools