DAKboard is a wifi connected wall display for your photos, calendar, news, todo and weather.

DAKboard is a wifi connected wall display for your photos, calendar, news, todo and weather. 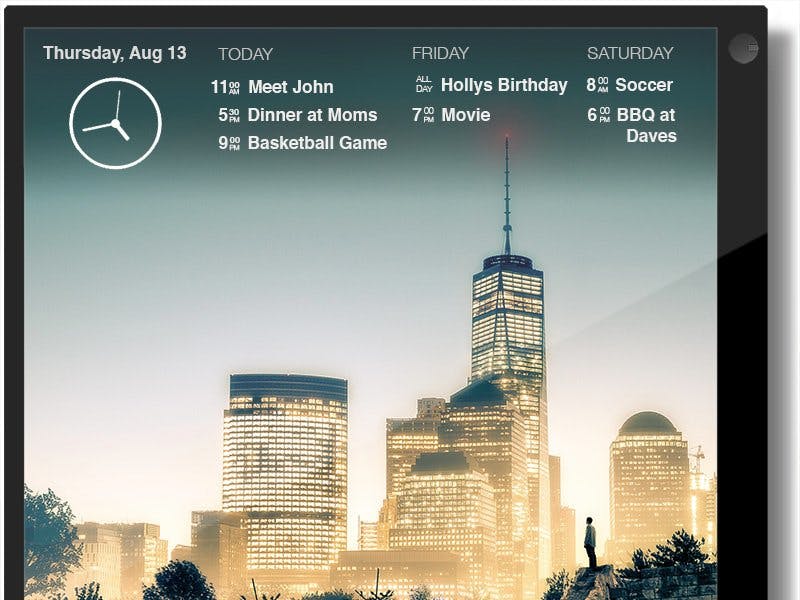 Have a spare monitor lying around or a new Raspberry Pi but don’t know what to do with it? Perfect! Follow our instructions below to create a beautiful wall display running DAKboard, powered by a Raspberry Pi!

If you haven’t already done so, sign up and configure DAKboard. In the configuration screen, go to “Account” and click the “Generate” button next to “Private URL”. Note this URL, as we’ll need it later when configuring the Raspberry Pi.

I recommend downloading NOOBS, which is a simplified Raspbian OS installer: https://www.raspberrypi.org/downloads/noobs/

Once downloaded, follow the setup guide to get the OS onto your SD card, and the Raspberry Pi up and running: https://www.raspberrypi.org/help/noobs-setup/

After following the NOOBS setup instructions, you should now have your Raspberry Pi running but we’ll need to update a few settings to optimize it to run DAKboard.

We’ll want our Raspberry Pi to boot directly into a browser running DAKboard in fullscreen mode, without having to press the keyboard or click the mouse! So, you’ll either want to open the terminal application if you’re in the Raspberry Pi desktop, or SSH into your Raspberry Pi.

In here, choose to:

Exit and choose to reboot later. Set your Wifi network name and password:

And change your SSID and PSK:

If you’re going to be mounting your display vertically (portrait orientation), change the rotation configuration:

You’ll also want to check and make sure that disable_overscan=1 and no other overscan configs are uncommented here. Now lets reboot so our network settings will take effect and we can access the internet:

Once the RPi is back up, go back into a terminal and we will need to install a couple apps, and have DAKboard load automatically on boot.

Chromium isn’t included in the Raspbian Jessie repository (as of 12/9/2015). Instructions to download and install on Raspbian Jessie are here. And lastly we’ll want to force the screen to stay on, and load the Chromium browser running DAKboard on boot:

Now, reboot one last time, and when the RPi comes back up, we should see DAKboard running in full screen!

Turn the monitor on and off automatically (optional)

To turn the monitor on/off on a daily schedule, grab this script and put it in /home/pi/rpi-hdmi.sh. Next, make it executable:

Now we’ll need to add a cron entry to call this script at the desired time, so open the cron editor:

And add the following lines at the bottom of the file:

The  first number (0) is the minutes and the second number on each of those lines (22 and 7) is the hour in 24 hour time. So in this example, the monitor would turn off at 10:00pm and back on again at 7:00am. Adjust the time for your needs.

Keep in mind: this does not turn the Raspberry Pi off! It just turns off the monitor, saving energy and hopefully extending the life of your monitor. The Raspberry Pi is still on and running however.

Install hardware on the back of the monitor

When you’re all done, plug it in, hang it on your wall and enjoy!