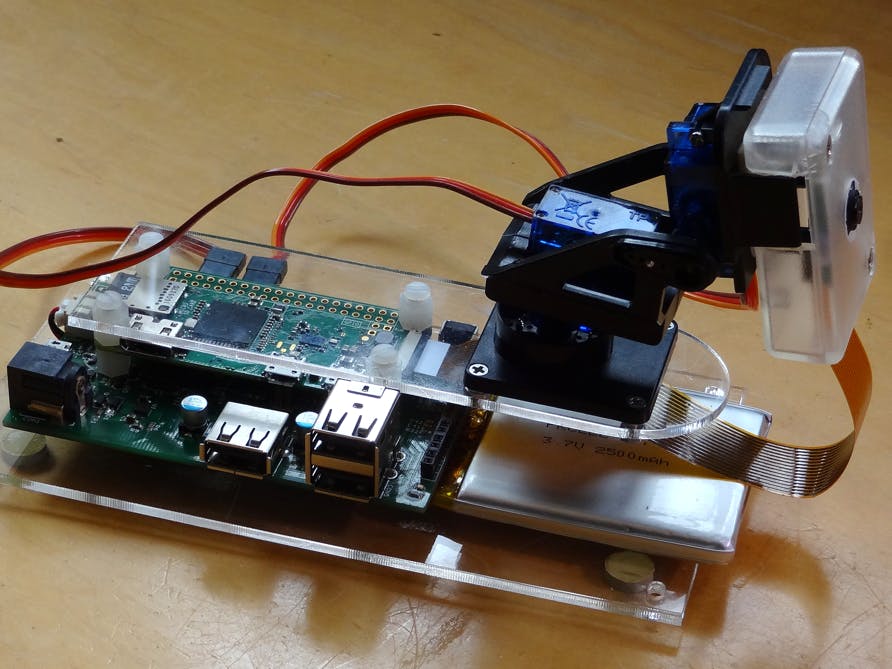 Calin Crisan's excellent motionEyeOS is a complete Linux distribution that turns the Raspberry Pi Zero into a highly functional wireless webcam. He provides detailed instructions for installation and configuration; some are referenced here. These instructions show how to use a gadget I designed called the Solar Pi Platter with a Pi Zero W to extend the capability of motionEyeOS with battery backup, pan/tilt servos and a status information display.

Installation is simple using the extension capabilities built-in to the motionEyeOS distribution. The pan/tilt controls as well as a status display showing battery and charging conditions show up in the web interface.

Building this web cam consists of the following steps described in this readme.

I encourage you to read the Pi Platter Manual found in the documentation directory as well as the thorough documentation in the motionEyeOS wiki.

I built my unit using components that I had on hand. You can certainly substitute some components like the backup battery and pan/tilt assembly.

I laser-cut a two piece assembly for this example but you may want a different type of enclosure depending on your application. The files for my cut-outs may be found at the end of this story. Both pieces may be cut out of a small (200mm x 200mm) piece of 2mm thick acrylic.

Assembly is straight-forward. The Pi Zero mounts on top of the Pi Platter using the included mounting hardware. This assembly mounts in the enclosure in a stacked arrangement using the additional stand-offs.

I held the battery down with a piece of double-sided sticky tape.

Connections to the Pi Platter are made as shown in the following image. Check the servo connections to make sure they match. Most servos I've seen use a Brown-Red-Orange cable for GND-5V-PWM. Incorrectly connecting them could damage them or the Pi Platter.

Add 3 pin headers to the Pi Platter for the servos

It may be helpful to attach a monitor and USB keyboard during installation.

Unmount the micro SD card and put in the Raspberry Pi. Connect the Pi Platter to the battery and USB power supply. Then power up the system by pressing the power button on the Pi Platter for two seconds until you see the green power LED light. The initial boot may take a couple of minutes as motionEyeOS configures itself. You can see the progress if you have a monitor attached to the Pi. After the system boots and motion starts you should be able to view your webcam by pointing your browser at the Pi's IP address.

The motionEyeOS distribution creates a partition, /data, that is used to store persistent changes. It is created during the first boot. We manually put the additional files in this partition (/data/etc).

The five scripts found in the github scripts directory use the motionEyeOS Action Button capability to allow control of the servos and for displaying information from the Pi Platter in the web interface.

The pre-built talkpp binary also found in my github repository is used by the scripts to communicate with the Pi Platter.

The talkpp binary and five script files are easily copied to the /data/etc directory using scp or via a USB Memory Stick.

Download the files to your local computer and execute the following commands from a shell in the directory containing the files. You would use a program like WinSCP on a Windows computer. Put your Pi's IP address in the [IP Address] field.

Note that by default motionEyeOS has no password. You can and should add a password using the web interface.

Copy the files to a FAT-formatted USB memory stick on your computer.

Eject the memory stick and then plug it into one of the Pi Platter USB ports. motionEyeOS will automatically mount it in the /data/media directory.

Log in to the Pi via ssh or using the keyboard/monitor and copy the files from the memory stick to the system from the bash shell prompt.

Make sure that the files have the correct linux file permissions so that motionEyeOS can execute them. From a motionEyeOS shell prompt, type the following.

The /data/etc/userinit.sh file allows motionEyeOS to execute custom commands when it boots. We use this facility to configure the Pi Platter to automatically restart the system in the case that AC power has failed and the system runs from battery until it is discharged and the Pi Platter shuts down power.

From a motionEyeOS shell prompt, edit the /data/etc/userinit.sh file using an editor such as vi or nano. Add the following to the end of the file and save it.

Type reboot from a shell prompt or use the web interface to restart the system. After it reboots you should be able to control the servos and view Pi Platter status via the motionEyeOS web interface. Clicking on the video image streaming from the camera should cause motionEyeOS to add an overlay to the image with status information from the Pi Platter on the lower left and four pan/tilt buttons on the lower right.

New capability in the web interface

The pan/tilt scripts have constants that set the minimum and maximum PWM values to send to the servos. These were values I found worked for my system. However you may end up needing to modify them if you find your servos hit the end of their motion range (they will make a grinding sound and take a lot of current as the motor tries to push the servo past its limit). This can harm the servos as well as possibly draw so much current that the Pi Platter will shut down.

For example, the left_1 script controls panning left. It does this by increasing the PWM value written to the Pi Platter to control the pan servo on PWM 1. The PWM values range from 0-255 but this script limits the maximum PWM value using the constant PWM_MAX (to 250 in my version). You should decrease this value if you find the servo hitting the end of its range when panning left. To change the maximum to 240, edit the left_1 script and change the constant.

The Pi Platter powers the system from the USB Power adapter when power is available on that input. It uses a voltage threshold of approximately 4.7 volts to switch from USB power to the battery. It also reduces the charge current to the battery as the USB input voltage drops. Since many USB adapter cables use thin wires and the current draw by the system may exceed 1 A, the voltage seen by the Pi Platter may be significantly lower than the output of the USB adapter. For this reason I recommend using an adapter that outputs 5.1 to 5.25 volts.

If you see AC PWR status display blinking on and off then it is likely that the USB voltage seen by the Pi Platter is too low and it is constantly switching between USB and battery power.

The system will draw over 700 mA from the battery when operating from it. Battery capacities of 2000-6000 mA are a good match for this system depending on the amount of time it should be able to run on battery power alone.

The Pi Platter command C7=1 executed in the modified userinit.sh file configures it to automatically restore power after a shutdown due to a low battery. For this reason the system will also immediately power back on and reboot if you shut down power to the system by holding the Pi Platter power button for several seconds (because the battery voltage is above the restart threshold). To shut down power, first log into the system and execute the following command to disable the auto-restart function before powering down the system using the Pi Platter power button.

Enable the Pi to Act as a WiFi Access Point

The motionEyeOS software may be configured to create its own network, acting as a WiFi access point. This is useful for a remote time-lapse or security system located in an area without WiFi. Configuring the system as a WiFi access point must be done after the initial installation/boot. Detailed instructions can be found at WiFi-Access-Point.

For some reason I don't understand enabling this mode disables ssh access so it's important to have finished the additional installation before performing these steps.

The Pi Platter contains a battery-backed real-time clock that can be used to set the Pi's system clock for the cases that it is unable to access a network time server.

To set the Pi Platter RTC from the Pi's system clock (assuming it has the correct time and date):

To set the Pi's system clock from the Pi Platter RTC:

This command may be included in the userinit.sh file.

The Pi Platter includes two analog inputs with configurable ADC voltage references. These could be used to for additional status information like temperature using an analog temperature sensor.

Information about using the ADC inputs can be found in the Pi Platter user manual. The monitor_1 may be modified to read and display the temperature from the analog input(s).

2 projects • 13 followers
I am an electrical engineer and maker living and working in the foothills above Boulder, Colorado.
ContactContact