An ESP8266 measures temperature and uses the Sigfox network to send the measurements into a web server to monitor a compost pile.

An ESP8266 measures temperature and uses the Sigfox network to send the measurements into a web server to monitor a compost pile. 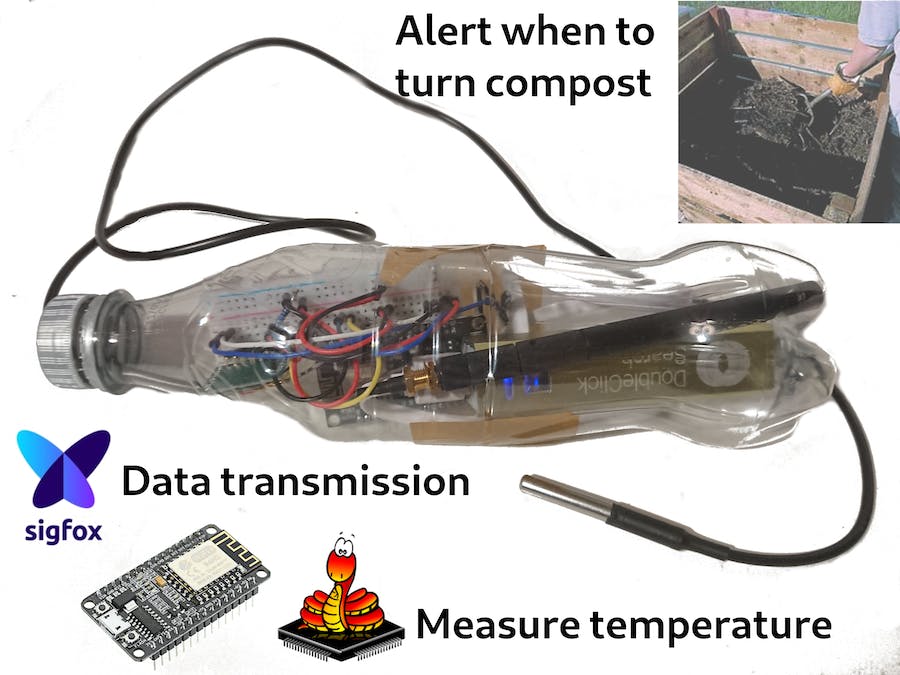 Reducing wastes is important to minimize the energy footprint from human activities. Compost is a great way to reduce organic waste since it shrinks wastes in controlled conditions by the action of bacteria, micro-organisms and macro-organisms. These creatures decompose organic materials through oxygen in order to create heat. ♨️

One of the key factors to make good compost is monitoring regularly the internal conditions such as temperature to calculate the decomposition rate. The temperature also helps to predict when the pile needs to be active to introduce more oxygen. More information about the effects of the temperature can be found here.

Monitor process is not always a simple task since the confined conditions of the composts reduce accessibility. Besides that, the operation of opening the compost box affects internal conditions as well.

Therefore, I decided to use Internet of Things (IoT) to monitor temperature of a compost. My idea is to build an IoT device to retrieve compost conditions in a regular basis and send them to the cloud in order to easily monitor them via a web page.

Existing solutions are focused mainly on locally recording temperatures, and don’t provide transmission of data to the cloud. Then, my solution provides a low-power consumption autonomous device, which sends information regularly to the cloud in order to monitor temperature in real-time.

My project is based on the following guidelines:

Following these conditions, I chose the ESP8266 microcontroller. It’s a very popular IoT device, which costs me 2.69€ and it has a deep sleep mode that allows a reduced power consumption when the device is idle. In addition, this device can easily interact with a BRKWS01 module in order to send messages using Sigfox LPWAN protocol. Consequently, this solves my last requirement because it removes the need to have the device connected to a fix internet access point in order to transmit the messages.

The ESP8266 has 30 pins. The detail of the function of each pin can be found here. I use the following pins:

Notice that pins GPIO1 and GPIO3 are used for serial communication with the USB cable and so with your PC, so serial connections like rshell or picocom won’t work. So I have found another way to communicate with the device from my PC.

The following ESP8266 ports can be used for serial communication:

MicroPython provides a UART class which implements the UART protocol for serial communication. This class is initialized using only ids 0 or 1. UART0 corresponds to ports to the serial communication of ports GPIO1 and GPIO3, while UART1 corresponds to the connection of pin GPIO2. It is not possible to initialize it to use pins GPIO13 and GPIO15. For this reason, I was forced to use GPIO1 and GPIO3 (UART0) to communicate with the BRKWS01 device.

Luckily MicroPython provides WebREPL, which relies only on web socket connection, so that I could use UART0 for data transmission and still have access to the REPL console for debugging purposes.

I started by soldering the pins of the BRKWS01 device. I only used the power supply, and the transmission and reception pins. Then, I soldered the edge of the device that contains those pins, as show in the photo below.

Soldered edge of the BRKWS01 device

The DS18B20 probe must be soldered to the device because I chose the version that comes with cables, which cannot be attached easily to the breadboard.

I put the components in the breadboard and connected them using wire cables following the Frizing schematic, which was presented before.

I connected a charger via a USB port to the ESP8266 and embedded them in a plastic bottle in order to keep safe from harsh conditions of a compost box. The only thing set as output is the DS18B20 probe to measure the temperature correctly.

Micropython provides access to most of the python 3.5 directives, which allows to any programmer to write a high-level Python code to program this microcontroller. Rather than Arduino, I used Micropython for the following reasons:

In order to use Micropython you need to configure your board first. The configuration is done through serial connection, so remember to disconnect temporally the cables from GPIO1 and GPIO3, as explained in the project planing section. Then, proceed with the following commands:

Then, you can access the serial shell using the following command:

rshell allows you to access the REPL, copy and/or edit files in the micro controller. More information about rshell can be found here.

The webREPL can be enabled using the following command in the REPL:

This commands will help you configure the webREPL. Then you can use a code like the one show here to connect your ESP8266 to your WiFi network. Finally enter the IP address of your device in the webREPL to connect to the device.

First of all, you have to configure your BRKWS01 with the Sigfox subscription. This step has been already been documented, as shown here. After that, you will be able to send messages to your BRKWS01 device, and see them in your Sigfox development account.

My main contribution was the code itself, that enables the communication between the ESP8266 and the BRKWS01. I will explain the Python class used to send the messages, but you can find the entire code in the github page of the project.

The backend of my application uses a simple express nodejs library to build a web application with the following endpoints:

The entire code is available in the github of the project.

Please notice that you have to configure the callback in the Sigfox account to transmit data to the Heroku application as follows:

The token parameters allow to secure the communication between the Sigfox callback and the nodejs application. So, you need to have the right token if you want to insert data.

The advantage of using a custom application is that alerts can be sent if the temperature goes up above a threshold. In addition, It is also possible to make simple static analysis to predict when the temperature will raise above a certain level, and program compost interventions.

The frontend of my application contains a simple html with a line chart, created with chart.js.

I have deployed my application in Heroku (the link to the dashboard can be found here) because it’s free of charge, and also because I think it’s very simple to employ. I have just to create a Procfile to indicate Heroku what command to execute. Then, by pushing the code to Github or Heroku git, the deployment is online automatically.

Recommended temperature range for the compost varies between 32°C and 60°C. Above 70°C, most microorganism cannot survive. The compost pile should be turned around when the temperature is above 60°C to provide oxygen and release excess heat. In each pile turn, the temperature decreases and rises depending on a given number of cycles. When the pile fails to reheat, the compost is ready to cure.

Temperature evolution of a compost

During my tests, I put the device outside the compost and insert the temperature sensor inside the compost pile. The plastic bottle serves as protection for environmental conditions. The device continues sending messages even in remote conditions. My results prove my solution works, while there is a lot of room for improvements.

I'm globally satisfied with my project 🎉because:

This project contributes to the Sustainable Development Goal 12, for a responsible consumption and production. Composting is a clean way to reduce organic wastes, this kind of project increases the interest of people about doing this activity and also allows to do it in a very efficient way.

In different conditions, I would use a different battery, because batteries based on USB ports consume a lot of energy due to their brights leds, which indicate when they are on.

There is still room to ameliorate the web interface by adding more functionalities such as sending email alerts, when temperatures reaches a certain value.

There has been scientific publications about this kind of applications, which prove that there is a rising interest in the field. 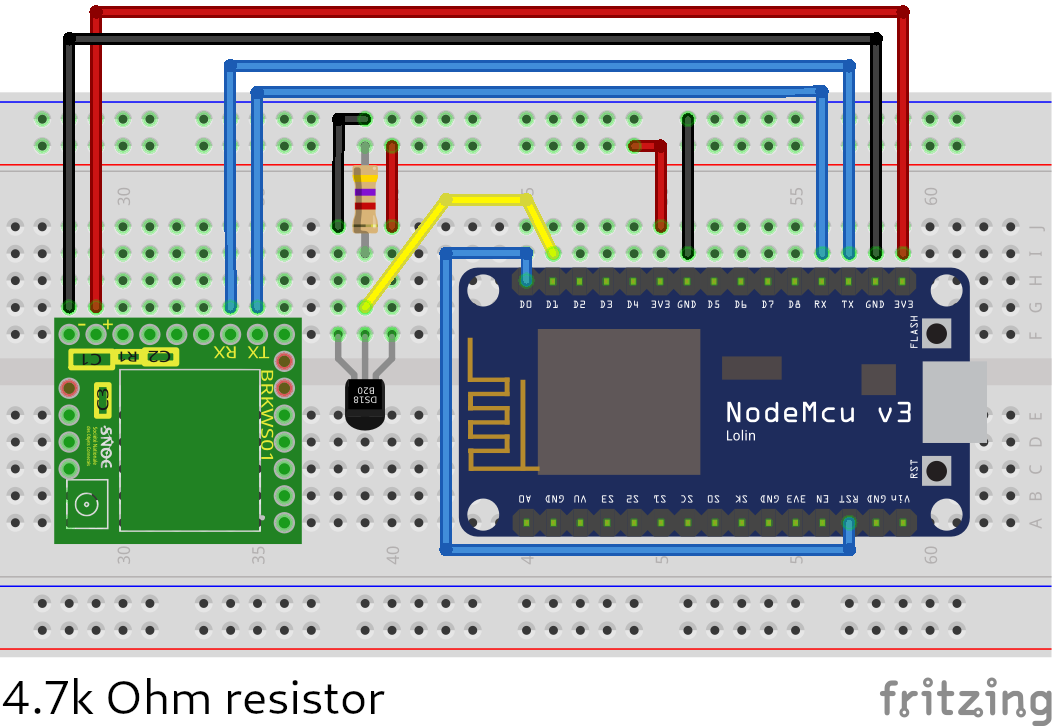