Help to train and improve your handstand!

Help to train and improve your handstand! 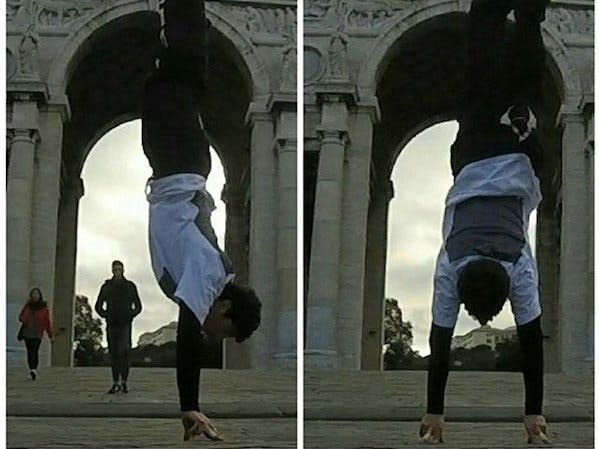 The project were built with arduino/genuino 101.

This board contains a device, called Intel Curie that contains a processor, bluetooth low energy, accelerometer and gyroscope.

The project was built for hackster.io contest on arduino/genuino 101 for the category healthcare.

It's all started as a way to develop a wearable for parkour capable of track and improve parkour movement.. than it become a wearable for improving handstand.

The device has been created to engage people on training every day with handstand!

It is a complicated and intense movement and a good exercise to get fit and be healthy: http://healthyliving.azcentral.com/many-benefits-handstands-health-8911.html

It is another fun way to stay fit.

The simple application I built, can track on each session:

The application running on the 101, reads the position of the accelerometers and it creates a bluetooth LE device, with a specific characteristic code and type of value notify. The code on the 101 continually checks the accelerometer data: if something is changed between the previous reading and if the algorithm finds a new position: it sends an update through the bluetooth characteristic.

On the computer side, the application, connects to the arduino. Once connected if something is sent from the 101, an event is raised from the bluetooth stack and a callback in javascript called.

The callback reads the new information and with a simple algorithm establishes if the position received rappresent:

Thanks to the "notify" configuration, there is no need from the html5 side, continually polls the device in order to receive updates: the bluetooth stacks do everything by themselves!

Once deployed on the device...

1 / 6 • once the application is opened, you will have 3 buttons on the bottom

I'm interested in this kind of tracking device. I do parkour and an help to improve my handstands is interesting.

The code on the arduino side is ok, the problem are in the dimensions of the device and the battery pack.

too big, not so wearable :D

The device should stay in a strap around the ankle or put inside a pair of shoes, something like these:

The client app right now runs inside the browser of my mac, but with very few effort I can build a native android/ios app with same functionalities and add new functions like:

At the beginning, before put all the efforts on the handstands, I was searching a way to track the quality of my parkour's jumps and so I've also created code to read accelerometer data in order to find jumps patterns..

The code is not working right now (maybe next months) but I did some video that sincronize the movement with accelerometer data:

9 projects • 17 followers
Interested in iot, mobile and security Love hackathons This is my blog http://pestohacks.blogspot.com
ContactContact