The idea of this project is to use blockchain for signaling DDoS attacks in a cooperative and distributed network defense.

The idea of this project is to use blockchain for signaling DDoS attacks in a cooperative and distributed network defense. 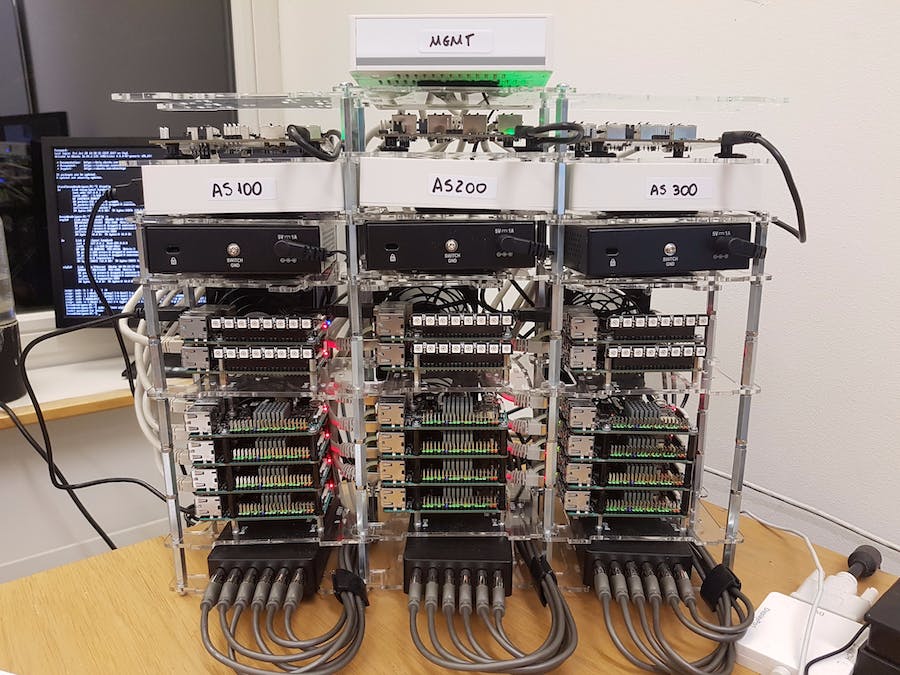 Hello, guys! This project is being developed as part of my Ph.D. research to evaluate my proposal through a prototypical experiment. My research is currently focused on developing a novel solution based on blockchain to support the signaling of DDoS attacks across multiple domains in a distributed defense.

After an initial prototype implementing different network domains on the same host, the second step was to extend the prototype to a truly distributed approach. At this point came the idea of using these boards to develop the project. Although remaining on a smaller scale, the prototype allows evaluating with a more practical view different aspects of the system (mainly related to performance).

Although the software/applications used in the project are specific to the problem I am trying to solve, I believe that the description of the hardware/how to set up a cluster can be useful for other applications. However, let me know if you want to find out more details on the project.

Many centralized DDoS defense systems lack hardware resources or software capabilities to detect and mitigate attacks by themselves, and as DDoS attacks become progressively sophisticated and coordinated, the defense from such attacks likewise needs distribution and coordination. Thus, coordinated and distributed defense efforts have become an attractive alternative to extend the defense capabilities of a single system.

The idea of this project is to use blockchain and software-defined networking to provide such collaborative defense reducing the complexity of existing distributed protocols and architectures for gossiping DDoS attacks information. While blockchain simplifies existing approaches with an out-of-the-box distributed infrastructure to broadcast addresses without the need to build specialized registries or other distribution mechanisms/protocols, software-defined networks can optimize the management of flows in response to attacks.

As I am using gigabit switches (and worse, the fast Ethernet SDN switch to interconnect the domains), thus I have a network bottleneck. For my application, it is not a huge issue, but if you want to build a cluster exploring the full capabilities of the tinkerboard Ethernet card, consider a 10 Gbps switch.

Two crucial points are the power supply and the cooling fans.

A fundamental choice is the Power Supply Unit (PSU) and how you will power the tinkerboards (micro USB or GPIO). Although there are some reports of instability while powering via micro USB, I choose this option because it is the simplest. However, you need to choose a good PSU and good cables. So far I had no problems using the Aukey charger (6 outports, two with 3A and four with 2.4A).

The tinkerboard produce lots of heat, and it gets worse when they are stacked. After seeing many reports of overheating issues, I used the AC Infinity fans (inspired by an RPi cluster project), and I also had no heating issues so far.

It is still an ongoing project, and many improvements are needed, but here are some images:

* It is not possible to mine Ethereum due to the RAM (at least 4 Gb is required). Thus I used two laptops connected to the management network.

Simple CnC to simulate a flood attack to a host

Traffic data monitored by the controllers is sent to an InfluxDB endpoint in the laptop which displays the stats in Grafana. The drop in inter-domain outbound traffic shows the attack blocking. 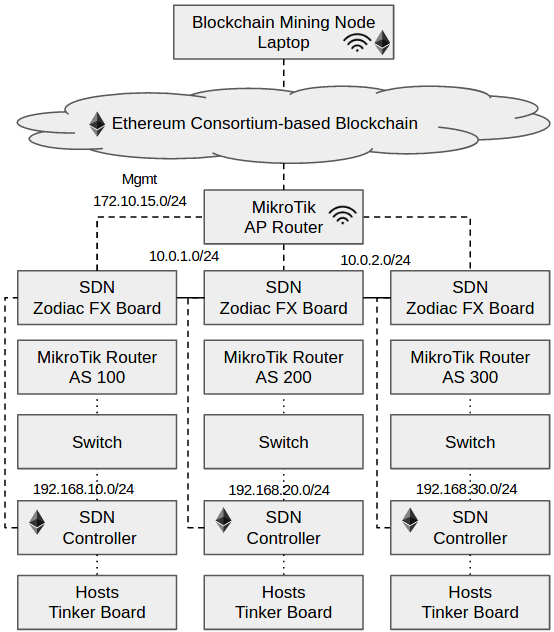 1 project • 20 followers
Hello, I am Ph.D. student at the University of Zurich at the Communication Systems Group. I like coding and networking.
ContactContact