This entry is a tutorial about Nextion LCD Touchscreen.

This entry is a tutorial about Nextion LCD Touchscreen. 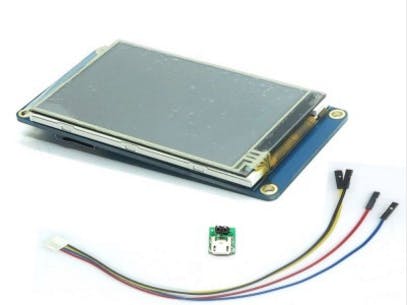 The Nextion LCD touchscreens are great for Arduinos because most of their functionality and processes are self-contained in the screen.  The communication with an Arduino is via a Serial UART port.  The benefit is that the Arduino does not use a lot of resources or pins dealing with a high resolution touchscreen, it simply sends serial commands to the screen or receives event notifications such as button presses.

Hooking up a Nextion LCD to an Arduino UNO

Installing Firmware via an SD Card

For this first part of the tutorial we are going to be using a firmware that demonstrates a couple of buttons, a progress bar and a text field.

Press the check boxes and note how the boxes give feedback when they are being pressed. They still do not change to Selected because we haven't sent the command to do so yet.

The .HMI file is included in the firmware folder.

Relevant data to note when looking at the .hmi example file.

The Pressed image configured to 1 is why the check boxes show the round grey circle when they are being pressed even though we haven't configured anything in the Arduino yet.

Receiving a Message and detecting a Button

Upload the "ReceiveMessages.ino" sketch from nextion/examples and open the Serial Monitor. Try pressing and releasing the two checkboxes. The responses should appear in the monitor. Note that the messages only appear after releasing the buttons. The exact behaviour is configured in the relevant Touch Event tab in the editor.

Using the listen() function any message coming from the Nextion is stored in a String.

We can modify the loop() to detect when a button is pressed (or in this case - released). Update the loop() with the following code:

The "65 0 2 0 ffff ffff ffff" was copy/pasted from the Serial Monitor. What does the message mean? Here is the official Nextion Instruction Set and a breakdown of the message:

This can be read as: "Button 1 on Page 0 was released". But it's easy to just copy the message and compare was done in the code above.

Making the button turn on

The next step is to update the icon when the button is pressed. In the code below instead of printing to the serial monitor we are sending two commands:

We send these commands to the Nextion using the sendCommand() function:

Now, if everything went well when the first button is pressed and released the green checkbox is turned on! It won't turn off because we haven't told it to. What would be the commands to turn the button Off?

"b0.picc=0" and then "ref b0". This switches the image behind the first button back to 0. Toggle Button

Toggling buttons on and off are a common occurrence in controls so we decided to add a function called buttonToggle(). Upload the "ToggleButton.ino" example and test the buttons. They should now switch between Checked and Unchecked.

To use the buttonToggle function a boolean variable is created for each button:

In the loop() we listen for a message, test for the correct button press and execute the function:

Upload the "UpdateText.ino" example to your Arduino. The text field in the Sensors card should be flashing between "Hello" and "1234".

In the loop() are two examples of how to send text to a text area.

In the Nextion Editor there is a component called a Progress bar. There are several aspects that I don't like about the implementation. First, it requires that one isolates the graphics for an empty and full progress bar and then add them to the Pictures in the Editor. Secondly, every time the progress bar receives a new value it erases the progress bar entirely and then repaints it. This causes a noticeable flicker even if it repaints with the same value. Hopefully, this will be fixed in the future.

Using the following technique, creating the graphics is a lot simpler. There is no flicker. And the technique can be used in a variety of creative ways.

The Graphics and Image Cropping (why it's so cool)

The three screens below are the ONLY graphical assets that were used in this project. Each screen is only between 17 and 19 kilobytes. Even the temperature progress bar states are included here. The first screen has all the graphics in their default or OFF states. The second displays both the buttons in their Pressed state. And in the third the buttons are shown in their Selected State and the progress bar is completely filled. How can this be? What if I want one button ON and the other OFF? How do I set the progress bar to 50%?

he trick is to use a technique called image cropping. Certain components, such as buttons, can allow a specified area of another screen to show through. So, for button 1 to show the green selected icon just allow the image from Picture ID #2 to be displayed only around the area of the button. To make the temperature sensor show 50% red, allow half the progress bar of Picture ID #2 to display.

The value to be displayed should be scaled between 0 and 100. This can be done easily with the map() function.

Upload the "Update Progress Bar. ino" sketch to the Arduino.  This sketch monitors analog port 0 and displays the values on the progress bar and the text area. To test I connected a potentiometer to 5V and GND with the wiper connected to pin A0.

Upload the "AllTogether.ino" sketch. The buttons should toggle, the progress bar should update and the text field should display the value of A0. 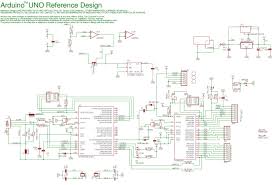