"Alexa, please bring me water." The user will be able to use voice commands to pick up a bottle of water and deliver to the user.

"Alexa, please bring me water." The user will be able to use voice commands to pick up a bottle of water and deliver to the user. 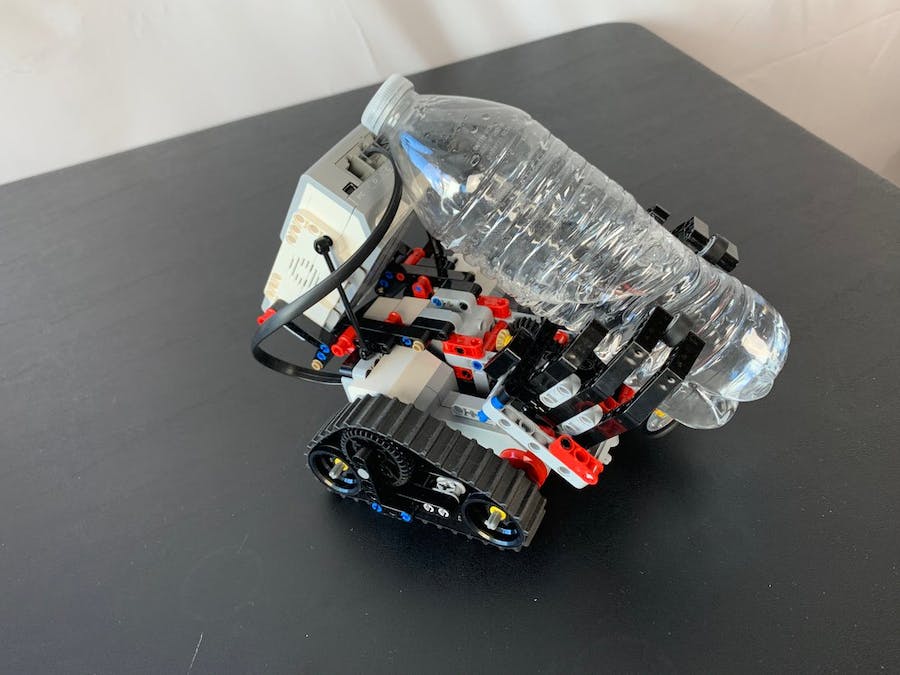 My friend, Jody Dyer, was truly the inspiration for this project. Jody was the first paraplegic to graduate from Georgia Tech. I asked him how a LEGO Mindstorms robot could assist him in his every day life. Jody answered that if he had a robot to bring items to him, it would greatly help out.

Using the GRIPP3R as a base, I added voice control commands to:

This tutorial builds upon Mission 3 of the Hackster LEGO Mindstorms Challenge.

Before You Begin: Complete Mission 3 here

2. Update mission-03 python code and upload to the GRIPP3R.

3. Modify your Alexa skill (from Mission 3) with the added voice control commands.

4. Run the Python code on your GRIPP3R robot.

For this project, you will need to build the GRIPP3R per the instructions from page 1 to 57. Note that the 2 large motors are used in the same way from the EV3RSTORM as they are used to move the robot across the table or the floor. Next, note that the medium motor has been repurposed from a cannon to the claw and will control the claw opening and closing.

At this point, I recommend "calibrating" the claw of your GRIPP3R robot by removing the microSD card, powering up the robot, and running the demo function.

Once the Demo has run, power down your robot and replace your microSD card.

For this step (and the following steps), you'll need to download the code from here.

In Visual Studio Basic, open up the mission-claw.ini file and update with the gadget Amazon ID and Gadget Secret that you created in Mission 1.

Save your new mission-claw.ini file.

Next, let's take a look at the changes from mission-03.py to mission-claw.py

First, I added to the list of preset directions and commands that the code would recognize. I also commented out the associated cannon commands from Mission 3.

Next, I add in the code to activate and control the opening and closing of the claw:

Define Open and Close positions for the medium motor

Later in the code, if we receive a command to open the claw, we need to activate that command:

Next, I also modified the turning code to be able to turn left and right by an angle specified by the user.

When the user directs the robot to turn by a number of degrees, now th code recognizes degrees.

Let's head over to Amazon's Developer Console, and hit Edit on the Mindstorms Alexa skill we created in Mission 3.

We now need to add in our Intent and Slots so that Alexa can recognize the commands, "Claw Open," "claw close," "turn right by 45 degrees," and so forth. Go to JSON Editor in the Build tab and drag and drop the model.json file from mission-claw folder.

Next, head over to the Code tab and copy and paste the code from index.js to the lambda code index.js. Click "Save."

Step 4: Run the Python code on your GRIPP3R robot.

Turn on your GRIPP3R EV3 robot with the microSD card from Mission 3. You'll also need your Amazon Echo device from Mission 3 for this step.

Connect your EV3 to your computer and transfer your mission-claw.py and mission-claw.ini files to your robot. (Same as in Mission 3)

Once the python code has started and your EV3 is paired with your Amazon Echo device, launch the Mindstorms Alexa skill as you did in Mission 3.

Your terminal in Visual Studio Code should look something like this when working properly:

My invocation phrase was:

Next you can start issuing commands such as:

Set your object about an arms length away (and directly in front) of your EV3 and say:

To end the skill say,

Now you can modify the code to string together more commands or create new commands to pick up objects with your EV3.

Thanks for checking out my project and have fun with this!