Memory is limited on small controllers, so I wrote compressed speech playback for the AVR architecture.

Memory is limited on small controllers, so I wrote compressed speech playback for the AVR architecture. 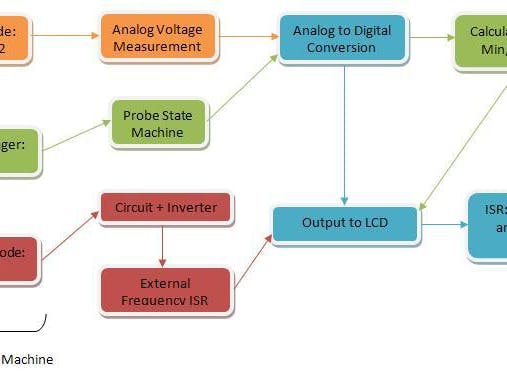 There are several ways of making a computer talk. The simplest is to record whatever you want to say and play it back at about 8000 samples/sec. The problem with this approach is that it takes a lot of memory and is not very flexible. Another way is to compress speech so that the MCU can directly do the decompression on the fly. I used differential, pulse-code modulation (DPCM). The motivation for sending samples of the first derivitive of the speech signal, rather than the signal itself, is that the derivitive changes relatively little between samples so fewer bits are required. I implemented a DPCM scheme with 4:1 compression which sends 2-bit derivitive samples. It sounds acceptable, but a little scratchy. I also implemented 8:1 compression (1-bit derivitives). The quality is lower, but still understandable most of the time.

A version of the DPCM algorithm can be implemented using very little processing time. A 2-bit/sample compressor/decompressor was written in Matlab to encode and to make a packed C header file, and then to do a test-decode. Note that the quantization break-points and reconstruction values are made up by me. You can change them, but you must be consistent in the encoder and decoder. An optimization (program + function) based on the histogram of first derivitives suggests that quantization breakpoints of [-0.05, 0, 0.05] and reconstruction values of [-0.16, -0.026, 0.026, 0.16] are about right for demo wav file given below. A decoder written in GCC for the Mega644 uses the packed code format to generate speech. Each second of speech takes 2 kByte of flash.

To use this system:

The file DPCMAllDigits.h has a GCC flash array for the digits zero to nine. If you include this in a test program, you have available all the spoken digits. The sample index boundaries for the digits in the array are given below. Using this table you can speak individual digits by decompressing only part of the flash array.

DPCMAllDigits.h is based on the TextToSpeech demo page using the simulated voice "Claire". Commas were placed between the digit names for synthesis. The original synthesis result (wav at 16 Ksamples/sec) and reduced rate result (wav at 8 Ksamples/sec) used as input to the compressor are included for reference.

A version of the encoder was written that simply sends one bit/sample depending on the sign of the first derivitive. The reconstructed speech has noticably higher noise than the 2-bit version, but is still understandable. The 8Ksample/sec speech waveform (from the TextToSpeech demo page using the simulated voice "Mike") is compressed with a matlab program to produce a C header file, which is included in a mega644 test program. About 60 seconds of speech should fit into flash on a mega644. Attach PORTB.3 to a low pass filter, and then to an audio amplifier. The low pass should cutoff at about 18,000 radians/sec (3000 Hz). Sometimes you can skip the lowpass and use the input characteristics of the audio amp to lowpass.