Introducing the Airnote with a complete hardware teardown and walkthrough.

Introducing the Airnote with a complete hardware teardown and walkthrough. 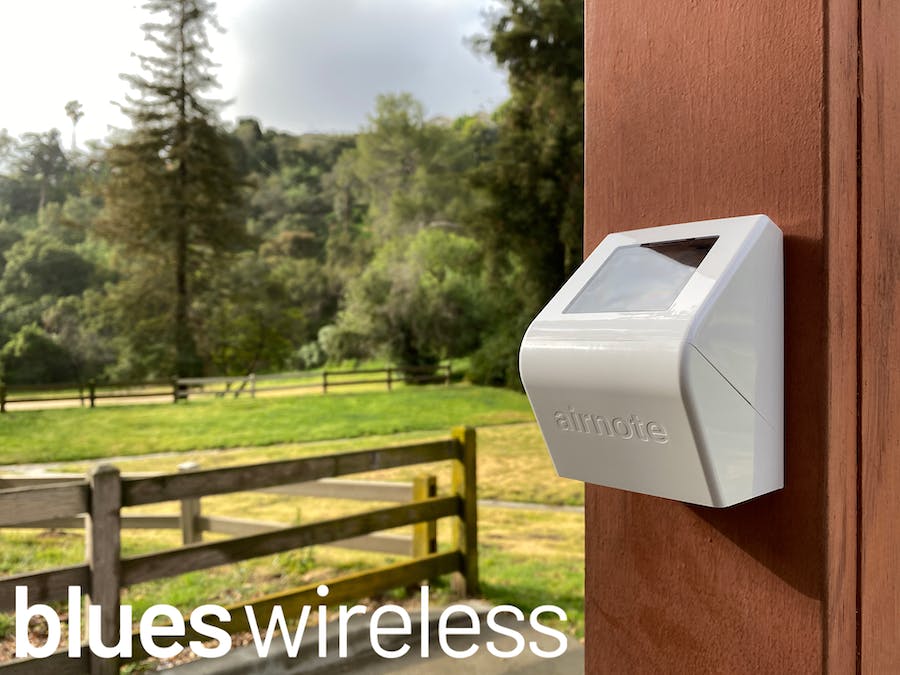 Want a free Airnote? Blues Wireless is giving some away as a part of their "Show us your air, get an Airnote" contest! Check out the details here.

There's nothing like a sunny, spring day. Warmth with a light breeze, the sound of birds chirping, and the feeling that another dreary winter has passed you by.

But as spring arrives each year, I often find myself worrying about what I can't see in the air around me. And not just those pesky allergens, but the microscopic pollutants that end up in the air from all manner of human enterprise.

It may be a clear day, but what's lurking in the air that we can't see?

The Airnote can tell you. It's an air quality monitoring device built by Blues Wireless, in partnership with Safecast, an international, volunteer-driven organization devoted to open environmental citizen-science. It's a cellular-connected, solar-powered device that anyone can set-up in minutes.

I've been using the Airnote at my house for the past few months. In this post, I'll show what's inside, and how it provides a better picture of air quality to the global community.

If you want to view a 4-minute overview of the project, check out the video below.

The Airnote is a cellular-based air quality monitoring device. Because it's a cellular device, and includes a 10-year, 500MB data plan with the built-in Notecard, there's nothing you need to do to get it online other than to top-up the battery, and turn it on. Once on, the Airnote collects data from its built-in sensors and sends that data to the Notehub.io cloud service.

The history of the Airnote, and Blues Wireless' partnership with Safecast is an interesting one, but I won't restate it here. Instead, I encourage you to check out this post I wrote on the Blues Wireless blog about how the Airnote came to be, and this post from Blues CEO Ray Ozzie, that dives deeper into how the Safecast team came together in the wake of the Fukushima nuclear disaster of 2011.

The airnote comes in a white box, nestled in foam and ready to deploy outside. But before we set it up, we're gonna tear it down.

The enclosure for the Airnote has six screws on the outside. Out of the box, two of the screws are included in a plastic bag and not seated in the Airnote so you can remove the bottom cover and top-up the battery before mounting.

The other four screws are seated on the rear of the device, which is the side with the QR code sticker and LCD display. If you remove those four screws, the innards of the Airnote will be fully exposed.

I removed the eight screws holding down the two PCBs attached to the Airnote side panels to get a full view of the device PCBs.

The Airnote contains two main PCBs connected by an FFC cable. The main PCB has a high-density solar panel from IXOLAR plugged into the top and a 1800 mAH pouch LiPo affixed to the back. Underneath is a slight variant of the Blues Wireless Notecarrier-AL and a Notecard. The Notecard that ships with the Airnote includes NB-IoT and LTE-M support in over 130 countries.

The other PCB is the sensor board. On the front is a LCD screen and a slide switch that turns the device on and off.

The reverse of this board has the sensors, including a Bosch BME280 temperature, pressure, and humidity sensor, and a Plantower PMS7003M particle concentration sensor

Altogether, there's a lot in this little package. And once the battery is topped-up, it can run exclusively on solar power when mounted in an ideal spot--south-facing window in the northern hemisphere, north-facing in the southern hemisphere--with plenty of sunlight.

With the internals fully inspected and documented, I carefully put the Airnote back together. I charged it for a few hours and mounted it to an exterior window, with the LCD panel and QR code facing the inside of the house.

Once powered on, the Airnote initializes, and tests its sensors. Then, it uses its built-in configuration to log readings to the Notecard, find a cellular tower and make a connection to the Notehub.io cloud service.

The built-in LCD screen displays the latest PM2.5 reading by default. You can customize this value, and configure a few other device settings by scanning the QR code, which opens the device configuration page for your Airnote.

When it comes to viewing the data your Airnote is sending to the cloud, you have a couple of options:

1. You can head over to the public Notehub.io Airnote project and view the raw data collected for your Airnote, or any other Airnote in the growing community of devices.

2. You can view a customized historical dashboard provided by the Safecast team for every device. Here's the dashboard for my Airnote if you want to see some real data in action.

The Safecast dashboard for one of my Airnote devices

You can access the dashboard for your own device by scanning the QR code, or by clicking the Dashboard link on the landing page for your device in Notehub.

The Airnote shares its data with Safecast, a non-profit building the world's largest open environmental dataset with the goal of enabling environmental awareness, and environmental action. It also enables some interesting awareness projects like Safecast.live, a live view of data streaming into the Safecast network, set to one of four haunting backing tracks. My favorite is Polivox, which has a distinct Blade Runner vibe.

A view of live sensor data at Safecast.live

Show us your air, Get an Airnote 👀

The Airnote is available to preorder today, and will start shipping around the end of April. To grab your own, head over to shop.blues.io and reserve your place in line.

Or we can give you one for free! In celebration of IoT Day on April 9th, and Earth Day on April 22nd, we're going to give some Airnotes away, and we want you to have one. Today, we're launching a contest called "Show us your air, get an Airnote."

The rules are simple. Record a 30-second video of yourself showing us where you'd place an Airnote, and why you want to measure your local air quality with it. Then, post that video to a sharing service like YouTube or Vimeo, and send us the link by April 20th. We'll give free Airnotes to the five best entries and will announce the winners on Earth Day, April 22nd.

For more info, check out the video below, and visit bit.ly/AirnoteIoT to share your video with us!