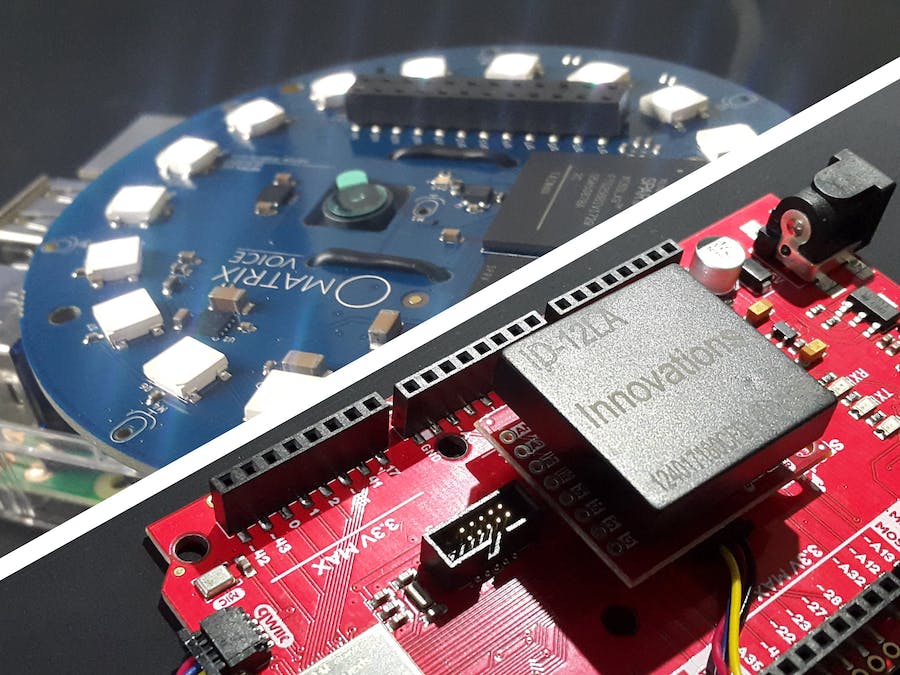 In this project I will show a proof of concept of a Voice Controlled Smart Door Bell device:

The Voice Controlled Smart Door Bell can replace a traditional / electronic Door Bell, with a one with AI powered voice control.

The device will me mounted at the main / front door of a home, and can be used both by the owner and guests.

The owner can use the device as an access control system:

When used by guests, the device will act as a voice controlled door bell:

The following diagram illustrates the functioning of the device:

note: the big boxes are voice intents, the small ones are related actions

The device uses a Raspberry Pi 3B+ as a base. To this a MATRIX Voice, Rpi Cam V2 is and the speaker is connected.

A SparkFun RedBoard Artemis ATP board, along with a SparkFun RFID Qwiic Reader board and a RFID Reader ID-12LA module is used build an BLE Connected RFID Card Based Access Control module:

The Artermis ATP board also a has a MEMS microphone, which can be used in the future to build voice based features.

In the following sections, I will should how to build / set up these devices.

The first thing we need is a Raspberry Pi with Raspbian installed. This can be done by following the official guide from raspberrypi.org:

Next, we can connect the MATRIX Voice, and set it up in two steps:

> Setting up the MATRIX Voice on Raspberry PI

The commands to run are:

Now, after the Raspberry Pi reboots the LED-s on the MATRIX voice should turn off.

The next step is to install the MATRIX Creator HAL by doing the following steps:

The build takes about a minute. After it's done, in the demos folder we should have some demos that we can run:

> Setting up Snips on MATRIX Voice

The setup Snips to run on the MATRIX Voice, we can follow the guide from the official Snips documentation.

First we need to install the MatrixIO kernel modules:

Then, on a host PC we need to setup SAM (Snip's command line interface):

and run the following commands:

This will install Snips on the Raspberry Pi, but to get it working we still need to change some configs:

(the credit for this goes to Rishabh Verma)

After this we can test the speaker and the microphone using the following commands:

If this worked, we can try to run the Weather demo:

Having this, if we say "Hey Snips!" we should hear sound confirming Snips is listening.

Now as we have the Snips up and running on the Raspberry Pi, we can start making a Snips App.

The first step is to create a Snips Assistant:

Snips assistants can have one or more active apps installed. This can be either installed from the official app store, or be custom apps made by us.

We want to create a new app:

Next we need to edit the Application:

We will have 4 intents, each with a set examples phrases:

Next we need some actions linked to our intents. Using action we can define custom behaviour for each intent.

The interactions we want to achieve are show in the following diagram:

the big boxes are intents, the arrows represents interactions, while the small boxes are external actions

All the Actions will be of type Code Snippets:

and will run Python 3 code, and will interact with the Snips / Hermes server running on the Raspberry Pi. From these actions we can control the flow (continue with a given intent, finish) of the current Snips session.

The actions associated with our intents are:

To deploy the assistant we need to do two sam actions:

Now we should be able to interact with the assistant...

Note: as this project is still a proof of concept, in this stage some parts of the system are just mocks:

Along sound we may also want to have live image streaming functionality in our our door bell.

We can use a RPi Cam module for this purpose. The MATRIX Voice / Creator both have square hole that fits a RPi Cam. I used twist ties to mount the camera:

We can do this using Motion. To set it up on the Raspberry Pi, I followed this tutorial. The step to do are:

Next we can start the Motion service with:

After this, the web control interface with live video preview should be available at http://your-pi.local:8081/:

On the hardware side we use the following components:

On the software side we need the Arduino IDE with the SparkFun Apollo3 board package and the SparkFun Qwiic RFID library.

I started creating the project with the BLE LED example, and then added the RDIF functionality.

The final code works as follows:

Having this, we can move on for further processing of the BLE data.

First I checked that the BLE works as expected:

The from a Raspberry Pi we can relatively easily extract process the advertised information. For example, we can use tools like bluetoothctl and hcitool for this:

The extracted Tag ID information then can used to allow or not access to the building.

Here is a demo video showing off the functionality of the device:

The next step, I think, would be to extend the system with a more owner oriented user interface. This could be either:

Along these, other useful features would be a 3D printed enclosure and a built in speaker. 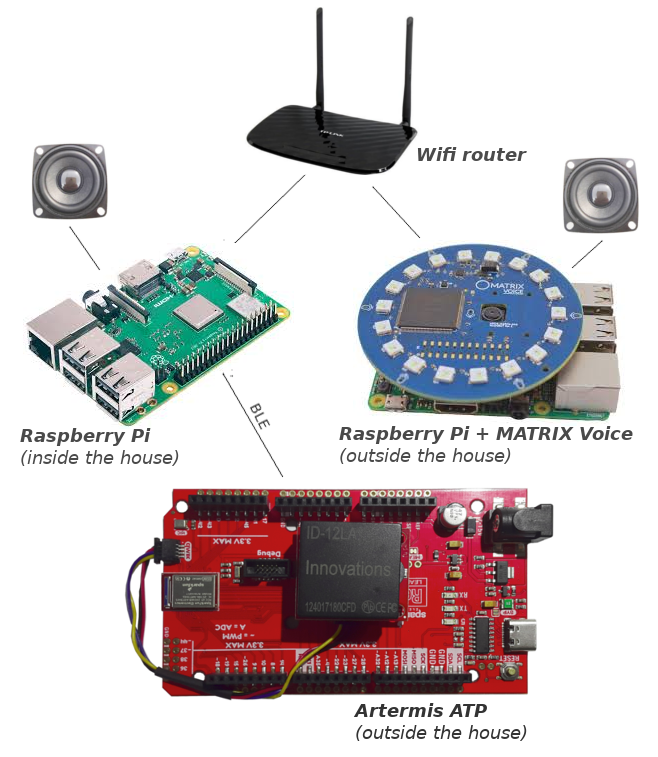