Hardware platform combined with DeepLib, an easy to use but yet powerful DeepStream based Python Library, and a web IDE

Hardware platform combined with DeepLib, an easy to use but yet powerful DeepStream based Python Library, and a web IDE

In this project, I will showcase Deep Eye, a rapid prototyping platform for NVIDIA DeepStream based Video Analytics applications.

The project consists in 3 maincomponents:

The Hardware Platform allows building video analytics projects with the Jetson Nano. It supports up to 2 MIPI CSI cameras, which are mounted on a rotating platform:

The rotating platform allows both horizontal and vertical movements of two cameras. The movement of the cameras can be controlled by a simple library.

DeepLib is a Python library based on the recently released DeepStream Python Bindings library. It allows the easy creation of DeepStream based video processing pipelines.

Complex DeepStream(and GStreamer) video processing pipelines can get quite complicated, both in terms of structure and the source code them. DeepLib tries to solve this issues by grouping pipeline components, in bigger and much easier to understand logical blocks:

The pipelines are build using a fluent API, allowing pipelines like the above to be built and ran as simple as this:

A number of different input and outputelements are supported. Processingelements like the NVInfer and NVTracker, allows to implement object detection, tracking and classification easily, and to create powerful applications quickly and easily.

When done, the pipeline can be exported to the JSON configuration file, which then can directly used by DeepLib to build the DeepStream pipeline.

The IDE also has a View Preview component, which allows previewing network based video streams like WebRTC and TCP.

The Web IDE can be tried on this Github.io page :)

The source code for DeepLib, and other components and as well the CAD files can be found in the GitHub repository of the project

Along the NVIDIA's Jetson product family, the Jetson Nano is the most accessible one with its $99 price tag.

Although the Jetson Nano is the lowest powered one of the Jetson modules, with its 128 CUDA cores it's still powerful enough to be used for Computer Vision, Artificial Intelligence and Intelligent Video Analytics applications.

Here are some of the relevant specs for the Jetson Nano Development Kit / Module:

One of the cool things about the Jetson Nano can be used with relatively easily available Raspberry Pi cameras(V2 cams are supported out of the box, V1 camesneeds manually built kernel modules).

Having the camera(s) hanging just hanging on their cables can be a little bit annoying, so I thought it would be fun to build a platform for the cameras:

The prototype was designed in FreeCAD(a open source parametric modeler software), and it can be built from the following parts:

The final prototype consist in 3 parts:

The parts were 3D Printed:

The movement of the cameras can be controlled using a small Python library, (located in the CameraMove folder in the linked GitHub repo)

The NVIDIA DeepStream SDK is NVIDIA's toolkit for streaming analytics applications like AI based video and image analysis, and other applications:

It is build over GStreamer, the popular open-source streaming multimedia framework.

Installing DeepStream on the Jetson Nano can be a little bit tricky. To install it we can follow one of the methods the DeepStream Development Guide.

The method that worked for me was the one using the the NVDIA SDK Manager:

After we select packages we want, the SDK Manager will automatically download the necessary components and re-flash an SD card image of the Jetson Nano.

If we did everything correctly, we should end up with a NVIDIA L4T install (the JetPack OS) with DeepStream SDK4.0 installed in /opt/nvidia/deepstream/deepstream-4.0

The DeepStream SDK comes with an example application that can be launched in multiple configuration.

We can launch the example application as follows:

This will an object tracking application run on 8 video streams in parallel. The result should look like:

A couple of mounts ago, NVIDIA released the DeepStream Python Binding, adding support for writing DeepStream applications in Python. The library is based on the GStreamer Python bindings library, and thus exposes almost the full feature set of DeepStream, combined with the easy of use Python.

The library and and example application are available on GitHub, in the DeepStream Python Apps repository.

At this we should have a set of example applications in /opt/nvidia/deepstream/deepstream-4.0/sources/python/apps/, each with it own README:

Thanks to a recent commit the apps are also available as Jupyter notebooks:

Complex DeepStream(and GStreamer) video processing pipelines can get quite complicated, both in terms of structure and the source code them.

Certain tasks, like reading H264 encoded video file, require the use of multiple pipeline elements linked together. Sometimes, a given set of parameters are required for this elements to be able to linked together.

DeepLib is a Python library I created which tries to solve this problem. It is build over the recently released DeepStream Python Bindings library, and it allows the easy creation of DeepStream based video processing pipelines.

The library solves the above issues by grouping pipeline components, in bigger and much easier to understand logical blocks.

For example the following diagram shows how a pipeline that does object detection on a video input, look in plain DeepStream and DeepLib:

DeepLib has a fluent API, which allows building video processing pipelines with just a couple of lines of code. Building and running the above pipeline in DeepLib is as easy as this:

There are 3 types of pipeline elements:

In terms of input elements, there are 3 implemented right now:

The File Input element is able to stream frames from a video file. The input file is first acceded using a filesrc element, then media container is parsed with an element like h264parse. The next step is to use a nvv4l2decoder to do the hardware accelerated decoding. Next the stream is passed through an nvstreammux which implements functions like scaling and batching.

The MIPI Camera Input element can be used to stream video from a CSI camera, like the RaspiCam V2. An nvarguscamerasrc element is used to access the raw (NV12) video stream from the camera. A capsfilter is used to set parameters like the desired resolution and frame rate.

The USB Camera Input element can be used with USB cameras / webcams, like the Logitech C920. The v4l2src element is used is used to access the video stream of the camera, either as raw stream of as an encoded stream. Then, a h264parse and a nvv4l2decoder is optionally used to do the decoding.

On the output side, we have the following elements:

To show the video output on the screen the EGL Output element can be used. Internally we use the nveglglessink element to do the displaying. On ARM based devices like the Jetson Nano, an additional nvegltransform is needed.

For real world application a video output on a display directly connected to the end device may not be possible. In these case we stream the video output over the network, using a standard protocol.

The RTSP Output implements video streaming over the standard RTSP protocol. GStreamer has supports RTSP by default, but integrating it to a pipeline is not trivial. To do it, we need to stream a H264 encoded and packed RTP stream, over an UDP on a local address (127.0.0.1). The next step is to instantiate a RTSP. When a RTSP client connects, a pipeline consisting in a UDP source is created on-the-fly. The data received by the newly created pipeline is then streamed to the RTSP client.

The RTSP Output element implements all this functionally with support for one or more outputs. Using it is as easy as calling .withRtspOutput("/myPath").

The TCP Output can be used to stream video over TCP, encoded (H264) and packed is some media container. The stream can be viewed in video players (ex. VLC) and some browsers (ex. Firefox).

The WebRTC Output will provide video streaming capabilities over the WebRTC protocol. This part is still work in progress. I have a working prototype, but the code is not yet on GitHub. Using it required building some GStreamer bad / ugly plugins from source, and this may cause some compatibility issues

As we covered the inputs and output, we can go on with the interesting part: video processing.

The NV Infer element can be used to implement primary and secondaryinference, useful for task like object detection and classification. Internally an nvinfer element is used with an user provided configuration file.

The NV Tracker element implements object tracking using an nvtracker element. Like NV Infer, this element is initialized with a standard configuration.

NV OSD is an element the takes the output (video and metadata) from the about two elements, and displays a visualization over the original video stream.

The following screenshot shows an output of the DeepStream example 2 implemented using DeepLib:

The example uses a primary detector, an object trackers and three secondary detectors. The output is streamed over RTSP, and shown in a VLC player instance:

Multiplexer is an element used internally to implement automatic multiplexing when an output pad is connected to multiple input pad.

When using DeepLib, the video pipelines can be built in two ways:

When experimenting with DeepStream and Gstreamer, I always found a little bit hard to get a good overview of more complex video pipeline.

So, I thought it would be fun to create a visual interface that allows easily creating and editing video pipelines.

Bellow is the DeepEye Web IDE, a simple editor that can be used to create and editDeepLib based video pipelines:

The editor is built using HTML5, CSS, and a couple of libraries. The notable of these is retejs / rete, which is a diagram editor / visual programming framework.

In the editor, the pipeline elements are represented as nodes. Each element can have one or more type sensitive inputs and output, and as well as a list of properties.

Then nodes can linked together, and the pipeline can be exported in a JSON configuration file understood by Deeplib:

The Web IDE also has a Video Preview part, which can be used preview network video streams.

The following screenshot shows the preview of an USB camera streamed over TCP:

There are a lot of thing to improve on DeepLib and Web IDE. Some of the first ones I plan to implement are:

One other product I want to try out is the NVIDIA Transfer Learning Toolkit, which allows allows adjusting existing Deep Neural Networks for our needs:

An another topic I want cover is Stereo Vision implemented on the Jeston Nano. The newly released rev. B01 of the Jetson Nano Developer Kit allows connecting two MIPI CSI cameras. It would be interesting to try to implement hardware accelerated 3D reconstruction the Jeston Nano. 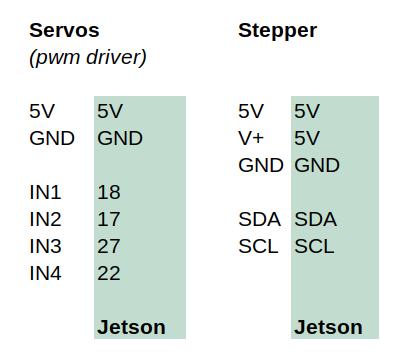