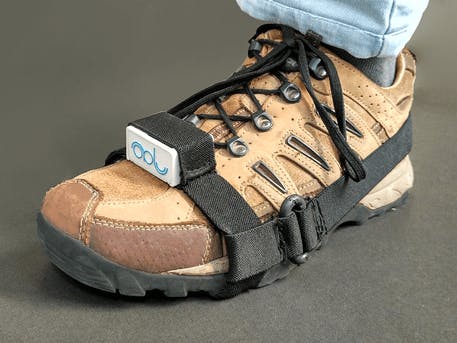 The OBLU can be useful for many things, including gait analysis. The use for gait analysis has already been looked into with an app for smartphones using the Andriod OS called Xoblu that is used for pedestrian dead reckoning or PDR. This app has features for gait analysis including a step count, average speed, stride length, stride frequency and distance. The app also has a footprints section which allows the user to see their path on their phone screen which can be zoomed in, out, and fitted for the screen. A map can also be uploaded to the background in order to see the path relative to the area walked. There are other features for the footprints as well such as choosing whether the user is inside or outside and tagging. Xoblu works by connecting the OBLU to the phone via Bluetooth so the app can obtain the information from the OBLU.

Since the OBLU works by using an accelerometer and gyroscope and these components are not perfect there is drift when getting the data from the OBLU. Xoblu has managed to minimize the amount of drift however so the error is minimal. This is most likely done by the help of the heading feature which has the user hold the phone to determine the angle between the phone’s position and true North. While Xoblu is incredibly useful for gait analysis it does present with some issues. For instance, if the user was a person who either didn’t have an Android smartphone or couldn’t carry the phone while walking for a number of possible reasons the app wouldn’t be of much use. A way to fix this would be to develop an application that does not need to be held in order to retrieve the same information that Xoblu can retrieve when being used.

Development of this application would require analyzing the open source code for Xoblu to adapt what could be adapted and also analyzing data from the OBLU such as drift in order to correct the drift in the application. This, however, is also not an optimal option though as the OBLU would have to be connected via USB or via Bluetooth. Either option would limit the range of the OBLU’s communication to the application with the USB being more limiting as the user could only move as far as the cord would allow. Bluetooth would boost the range the user could move however the range would still be limited based on the hardware of the server and the OBLU. The development of an application would be more optimal for gait analysis for the purpose of healthcare by being able to see the change in the user’s gait over time.

In short, the OBLU is useful for gait analysis of the user over time and already has a smartphone app, Xoblu, that already can be used to analyze the gait of the user. Xoblu has its limitations but can be used to develop an application for a user that cannot use Xoblu for one of many possible reasons.