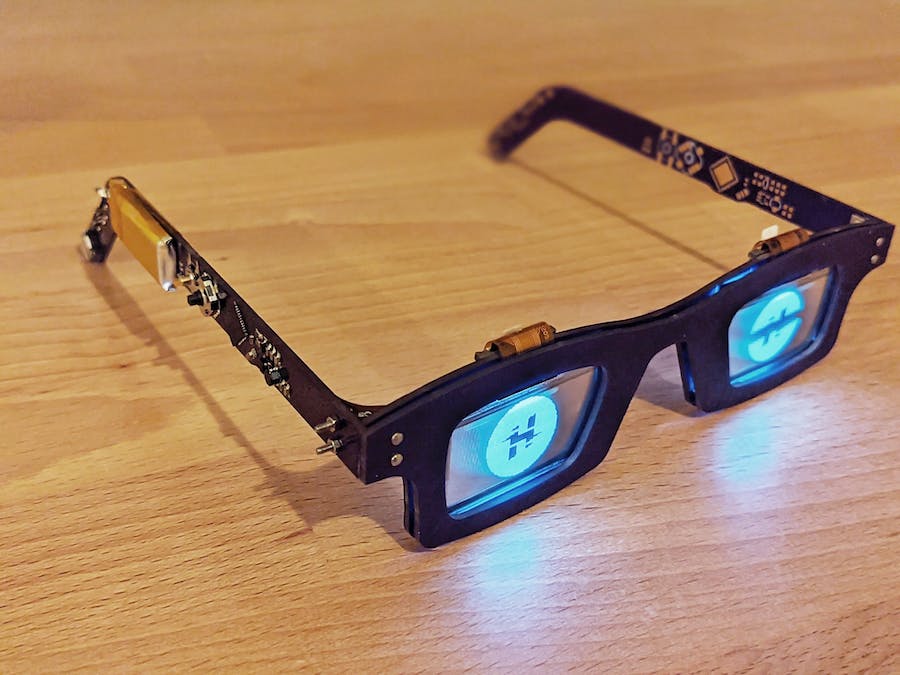 Ever since I discovered these transparent OLED a couple years ago, I’ve been wanting to turn them into glasses! When I first tried I could not get them to work, and it was only until I saw a post by Sean Hodgins on twitter about his success with them did I pick the project back up.

The glasses are made out of printed circuit boards from OSH Park. The electronics driving the two displays are entirely on the right side stem of the glasses along with a small 100mAh rechargeable battery that will run the glasses for a little more than an hour. The left side stem is the same PCB, just unpopulated.

The glass OLED displays are sandwiched between two PCB frames and the flexible connector for each display is wrapped around the top side of the glasses into a ZIF connector. The frames are electrically connected to the stem with a small flex circuit, also from OSH Park.

These are powered by the same technology as the Arduboy with the ATmega 32u4 and has all the same pinout so it can run any Arduboy game. It’s got a small joystick that clicks along with another button to give you all the input capability.

Designing the PCB in EagleCAD

I designed the PCB in EagleCAD using the Arduboy pinout to make it code compatible. These display use the SSD1309 controller which uses the same protocol as the SSD1306 in the Arduboy, there is only one command that is different that needs to be changed to get it to work.

The frames and the stem are connected together with a small hinge that is meant for jewelry boxes and other small crafts like that, but has been adapted for cyber purposes.

The two OLED are on the same SPI bus and have separate chip select lines to draw different content to each display, although I’m only using that mode in one demo for simplicity sake.

First functional prototype (only one screen)

You can see through the display too, it’s just a little tinted and blurry. Even with the blue LED in your eyes it isn’t too bright you can still see. It’s not practical for every day use, but that should be obvious. But it’s easily something that could be worn around a maker faire if such things still existed.

I printed out the frames on my 3d printer first to check the fitment, and good thing too because I had to widen it two times for my big fat head! That would have been a lot more expensive and time consuming if I would have ordered the PCBs!

There are absolutely no plans to put this into production but stand by for open source documentation coming soon!