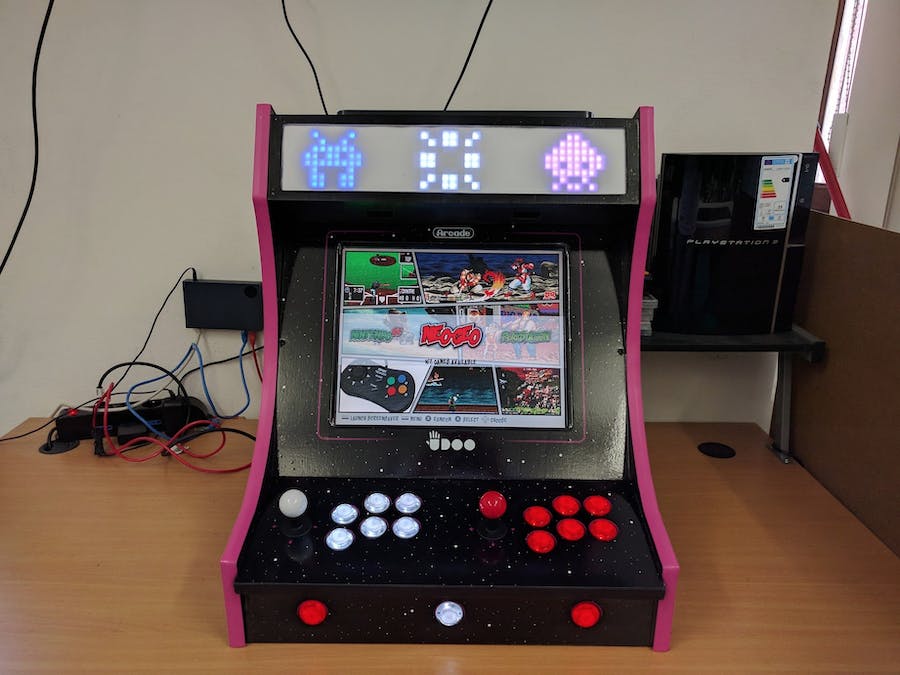 In this tutorial we’re going to see how to make an awesome BarTop Arcade cabinet using UDOO X86. The guide will be separated in 4 different parts:

You can create your cabinet with any UDOO X86 versions. All the versions are powerful enough to run all the retrogaming emulators for a great arcade experience. We chose the ULTRA version because we would run also Playstation 1 and Playstation 2 games.

We installed the joysticks and buttons for the two players and system, and then we plugged all of these controls into the controller boards. This is really simple because the controller boards connect to the UDOO X86 board by USB and they are directly seen as an input game device.

At this point we set up into the case the multi power plug and the UDOO X86 board.

First of all you need to setup your UDOO X86 and install Ubuntu on it as described in the Getting Started with UDOO X86 page.

All the accessories used works out-of-the-box with UDOO X86 without install any drivers. For example the player’s controllers and buttons connected through USB are seen as gamepad (DragonRise Inc. Gamepad) from Linux and directly configurable in easy way by the RetroPie settings.

One of the cool features of UDOO X86 is that it embeds an Arduino Leonardo microcontroller that can be used to physically control the real environment.

You need to install the Arduino IDE to program the Arduino Leonardo side of the UDOO X86.

You can check the UDOO X86 docs to setup the system and install the Arduino Leonardo board manager support.

This is the sketch we used to create some cool 8bit retro-gaming animation.

Once uploaded the sketch the animation will start on the Marquee matrix.

To create a more defined pixel effect we 3d printed a grid to surround each pixel and covered all the matrix with an opaque plexiglass.