An AI-powered gesture recognition bracer that communicates with Twitch. tv.

An AI-powered gesture recognition bracer that communicates with Twitch. tv. 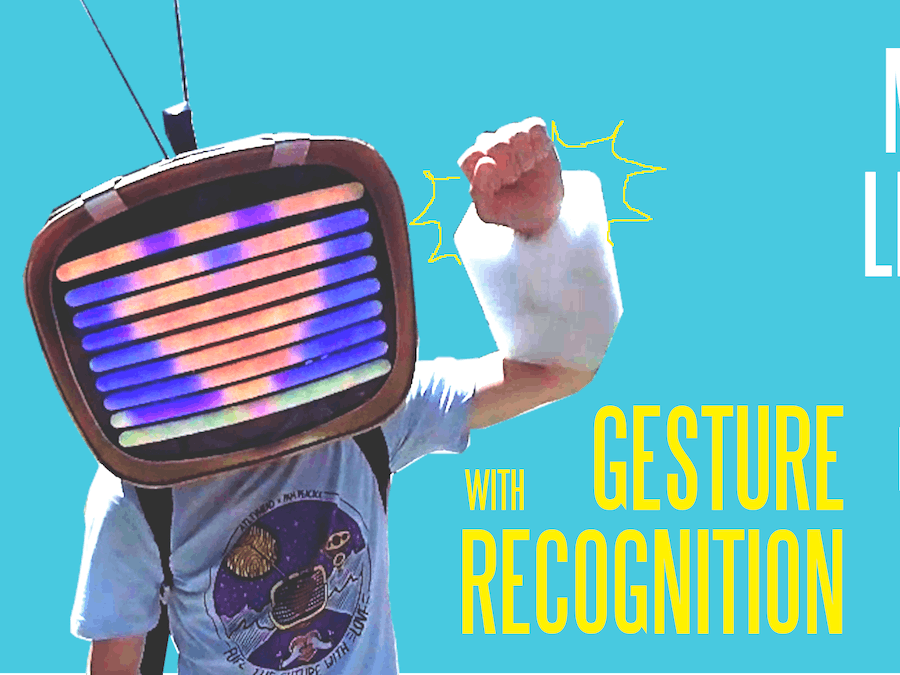 I run an interactive live stream. I wear an old tv (with working led display) like a helmet and backpack with a display. Twitch chat controls what's displayed on the television screen and the backpack screen through chat commands. Together Twitch chat and I go through the city of Atlanta, Ga spreading cheer.

As time has gone on, I have over 20 channel commands for the tv display. Remembering these commands has become complicated and tedious. So it’s time to simplify my interface to the tvhead.What are my resources? During the live stream, I am on rollerblades, my right hand is holding the camera, my left hand has a high five detecting glove I’ve built from a lidar sensor and esp32, my backpack has a raspberry pi 4, and a website with buttons that post commands in twitch chat. What to simplify? I’d like to simplify the channel commands and gamify it a bit more. What resources to use? I am going to change my high five gloves, removing the lidar sensor, and feed the raspberry pi with acceleration and gyroscope data. So that the Pi can inference a gesture performed from the arm data.

To briefly explain my sensor choices.

Lidar: I've used "lidar" Time of flight sensors to detect high fives, in the previous version of my wearable. However, it cannot detect arm gestures without complex mounting a ton of them all over one arm.

Stain Sensor: Using the change in resistance stretch rubbers I can get a sense of what muscles I'm actuating or general shape of my arm. However, they are easily damaged and wear with use.

Muscle Sensors: Something like an MYO armband can determine hand gestures, but require a lot of processing overhead for my use case. They are also quite expensive and the electrodes not reusable.

IMU: Acceleration and gyroscope sensors are cheap and do not wear out over time. However, determining a gesture from the data output of the sensor requires a lot of manual thresholding and timing to determine anything useful. Luckily machine learning can determine relationships in the data and even can be implemented on a microcontroller with tflite and TinyML. So I chose to go forward with an IMU sensor and Machine Learning.

The AGRB-Traning-Data-Capture.ino in the Arduino_Sketch folder is my Arduino script to pipe acceleration and gyroscope data from an Adafruit LSM6DSOX 9dof IMU out of the USB serial port. An esp32 Thingplus by SparkFun is the board I've chosen due to the Qwiic connector support between this board and the Adafruit IMU. A push-button is connected between ground and pin 33 with the internal pullup resistor on. Eventually, I plan to deploy a tflite model on the esp32, so I've included a battery.

The data stream is started after the button on the Arduino is pressed and stops after 3 seconds. It is similar to a photograph, but instead of an x/y of camera pixels, its sensor data/time.

In the Training_Data folder, locate the CaptureData.py script. With the Arduino loaded with the AGRB-Traning-Data-Capture.ino script and connected to the capture computer with a USB cable, run the CaptureData.py script. It'll ask for the name of the gesture you are capturing. Then when you are ready to perform the gesture press the button on the Arduino and perform the gesture within 3 seconds. When you have captured enough of one gesture, stop the python script. Rinse and Repeat.

I choose 3 seconds of data collection or roughly 760 data points mainly because I wasn't positive how long each gesture would take to be performed. Anywho, more data is better right?

To ensure you and I will get the "same" model I've included a Docker make file for you! I used this docker container while processing my data and training my model. It's based on the Jupiter Notebooks TensorFlow docker container.

As said in the TLDR, the DataPipeline.py script, found in the Python_Scripts folder, will take all of your data from the data collection, split them between training/test/validation sets, augment the training data, and finalized CSVs ready for the model training.

The following conclusions and findings are found in Jypter_Scripts/Data_Exploration.ipynb file:

The following information is can be found in more detail in the Jypter_Scripts/Data Cleaning and Augmentation.ipynb file:

Since I was collecting the data myself, I have a super small data set. Meaning I will most likely overfit my model. To overcome this I implemented augmentation techniques to my data set.

The augmentation techniques used are as follows:

To address the number of data points inconsistency, I found that 760 data points per sample was the average. I then implemented a script that cut off the front and end of my data by a certain number of samples depending on the length. Saving the first half and the second half as two different samples, to keep as much data as possible. This cut data had a final length of 760 for each sample.

As said in the TLDR, the ModelPipeline.py script, found in the Python_Scripts folder, will import all finalized data from the finalized CSVs, create 2 different models an LSTM and CNN, compare the models' performances, and save all models. Note the LSTM will not have a size optimized tflite model.

For which model to use, I want to eventually deploy on the esp32 with TinyML. That limits us to using Tensorflow. I am dealing with time-series data, meaning each data point in a sample is not independent of one another. Since RNN's and LSTM's assume there are relationships between data points and take sequencing into account, they are a good choice for modeling our data. A CNN can also extract features from a time series, however, it needs to be presented with the entire time sequence of data because of how it handles the sequence order of data.

After tuning hyperparameters, I ended up with a batch size of 192, 300 steps per epoch, and 20 epochs. I optimized with an adam optimizer and used sparse categorical cross-entropy for my loss, having accuracy as the metric to measure.

LSTM: Using TensorFlow I made a sequential LTSM model with 22 bidirectional layers and a dense output layer classifying to my 4 gestures.

After tuning hyperparameters, I ended up with a batch size of 64, 200 steps per epoch, and 20 epochs. I optimized with an adam optimizer and used sparse categorical cross-entropy for my loss, having accuracy as the metric to measure.

Next, I looked at the Training Validation loss per epoch of training. From the look of it, the CNN with a batch size of 192 is pretty close to being fit correctly. The CNN batch size of 64 and the LSTM both seem a little overfit.

I also looked at the size of the model. The h5 filesize of the LSTM is 97KB and the size of the CNN is 308KB. However, when comparing their tflite models, the CNN came in at 91KB and the LSTM grew to 119KB. On top of that, the quantized tflite CNN shrank to 28KB. I was unable to quantize the LSTM for size, so the CNN seems to be the winner. One last comparison when converting the tflite model to C++ for use on my microcontroller revealed that both models increased in size. The CNN 167KB and the LSTM to 729KB.

So I chose to proceed with the CNN model, trained with a batch size of 192. I saved the model, as well as saved a tflite version of the model optimized for size in the model folder.

I used a raspberry pi 4 for my current deployment since it was already in a previous tvhead build, has the compute power for model inference, and can be powered by a battery.

The pi is in a backpack with a display. On the display is a positive message that changes based on what is said in my Twitch chat, during live streams. I used this same script but added the TensorFlow model gesture prediction components from the Predict_Gesture_Twitch.py script to create the PositivityPack.py script.

To infer gestures and send them to Twitch, use the PositivityPack.py or the Predict_Gesture_Twitch.py. They run the heavy.h5 model file. To run the tflite model on the raspberry pi run the Test_TFLite_Inference_Serial_Input.py script. You'll need to connect the raspberry pi with the ESP32 in the arm attachment using a USB cable. Press the button the arm attachment to send data and predict gesture. Long press the button to continually detect gestures, continuous snapshot mode.

Note: When running the scripts that communicate with Twitch you'll need to follow Twitch's chatbot development documentation for creating your chatbot and authenticating it.