What to do with a Crazyflie and with helium filled party balloons? A blimp of course!

What to do with a Crazyflie and with helium filled party balloons? A blimp of course! 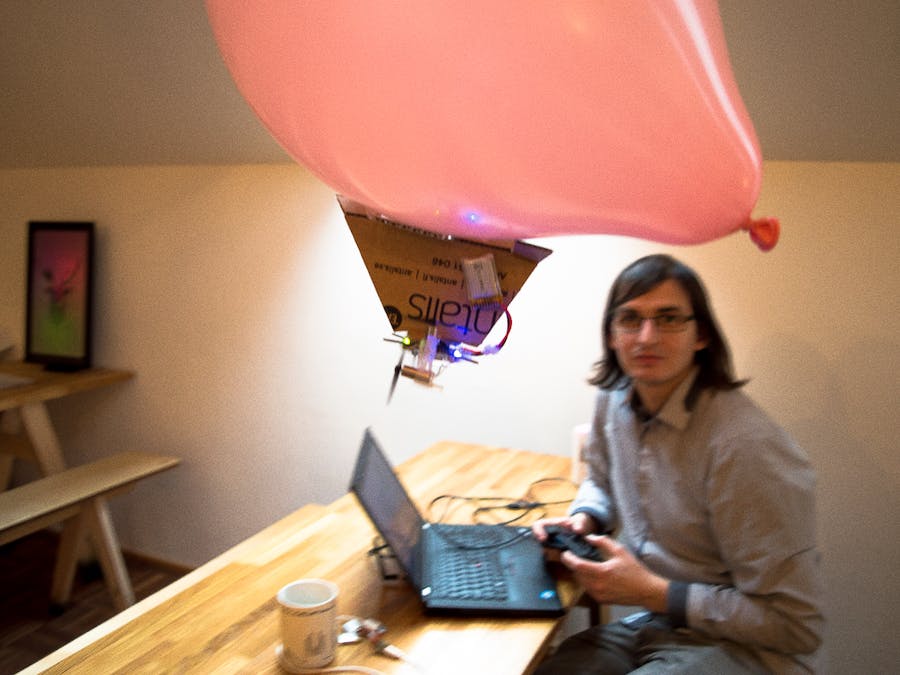 This project started at Minc the incubator where we has our office. They had some kind of conference/party and had hellium-filled party balloon everywhere. Since we where working with a Flying platform, the original Crazyflie, we stole ballons and started hacking together a blimp with a broken Crazyflie. The result was really fun to fly around and has been used a couple more times like at Arduino Day 2015:

In this project I will explain how to make a similar blimp but with Crazyflie 2.0 this time. As a bonus this can be done with a non-broken Crazyflie :-).

The basic idea is that the party ballons are attached to the copter and compensate most of its weight: the Crazyblimp should slightly fall down. Then two motors are setup to generate vertical lift to make it fly and two are oriented forward to make it go.

You should first start from a working Crazyflie:

Remove the motors with the motor mounts and install two motors facing front and two facing up. The motors are attached together by adding some hot-glue on the side:

Between the two motor mounts a small wood stick of about 30mm long is glued and the assembly is glued to the Crazyflies mounting holes:

Care should be taken to not put any glue in the deck expansion port. Also check that the motor wires are long enough to be connected to the motor connectors.

When the motors are installed and cabled, check that the propeller can turn freely and that they are turning in the right direction. If not, reorganize them.

Since the motor position have been reorganized, the flight control software has to be changed accordingly. In the Crazyflie the commander received set-points from the PC client or gamepad/controller. Then the stabilizer uses these set-points to control the motors speed.

In quadcopter mode the stabilizer is using the controller setpoint in the following way:

For the blimp this will become:

There is only one control loop left, for the yaw. This allows the blimp to keep a straight direction event with some wind or disturbances.

The code modified for the blimp can be found on my github dev-blimp branch.

First we have to modify the power distribution function from stabilizer.c. Originally it is:

We can recognized the distribution discussed earlier. So we can change it for our blimp:

The last things to do is to "short" the pitch control loop: for the blimp to fly we do not need any pitch active control but we use the pitch setpoint to control the front motors. A bit higher in stabilizer.c we can pass the pitch directly to distributePower():

The pitch setpoint is capped between 0 and 30 and then multiplied by 1000 to get an acceptable range for the front-facing motors.

Now the only thing left is to flash the new firmware in the Crazyflie. Since the branch can already be found on github the following commands will fetch it and flash it (I assume you are running in the Bitcraze virtual machine in the Projects/ folder and a Crazyradio is connected to the VM):

Restart your Crazyflie/Crazyblimp in bootloader mode and the new firmware is going to be flashed!

To fly the Crazyblimp connects to it with the client, or one of the mobile client, and slowly add some thrust until it takes off. The yaw is used to make it turn and pitch to make it go forward. Changing the control mode to put pitch and yaw on the same joystick helps a bit the control.