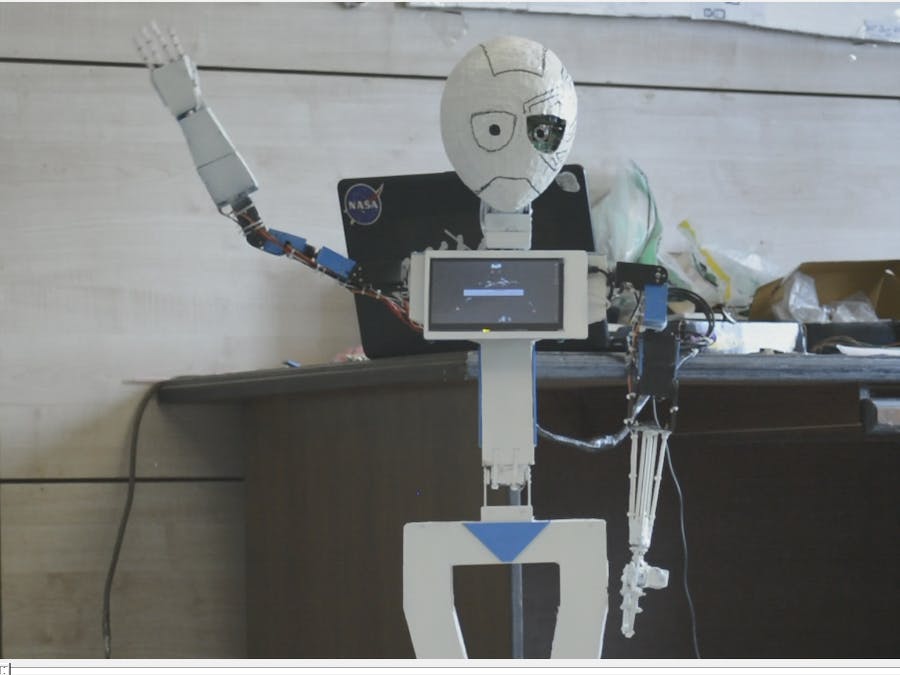 Hi everyone, today I'll be showing how I made the robot MIA-1, which is not only advanced and unique but also open source and can be made without 3D printing! Yes, you got it, this robot is completely hand made. And open source means - you get the codes and every details for free, you too can make this robot if you wish to.

Here we see only her speech, but there's many more things she can do!

Here are the things she can do:

To make this robot I've used all the things that are available at our local store.

Note that I have added a robotic claw and it uses another MG996r servo motor.

And jumper wires and etc

For image processing such as taking photo and detecting faces etc. I've used an USB camera.

NOTE: This tutorial is for intermediate and advanced level makers, I'll be focusing mainly on codes as it is the code that makes MIA-1, MIA-1. And if you get the code everything is easy for you.

The body is made using PVC sheet, different pieces are attached using Hot Glue and screws (see picture). I've cut the pvc sheet using cutter knife (be very careful!! don't cut your fingers instead!!). From picture one and two you can see the servo layout. As I was making a girl robot I have given it a female body shape and figure.

The servo connectors are made using thin pvc sheets as they bend well.

The head is made using a balloon, blew air in the balloon (see picture), added small wet pieces of papers and then dried it. After adding 8 layers it has become strong and sustainable.

Turned out the design is so amazingly balanced and she (MIA-1) stands right on two feet of her!!

After that just used some screws and hot glues to mount the lcd on her chest (last photo).

The circuit diagram looks complex but it isn't. I drew the circuit as the motor layout on body so that you can understand it more easily. Make sure to common the ground. The arduino takes power from the computer via its usb cable. There is a laser diode which enables mia to target things takes power from pin 13(led pin) of arduino.

As you can see that all the motors and the arduino itself is on the back side of the body. I also have put all the cables from back. Bought an extended USB cable so that it can be connected to the computer.

As you know I've used an arduino mega. The arduino mega controls the Servo motors, the motors are pre-programmed. Get the motors code from here. Please note the default servo positions, while building the robot maintain this. Just power the motors with arduino without making the body and the servo motors will reach to the default position (default pos below)

The motor control code is of more than 750 lines (be careful while editing).

The main processing is done using a python3 script.

Python has pySerial library that communicates with the arduino over serial. Mind the 'COM PORT'.

You also need to pip install these libraries

Everything is easy using pip install. For opencv type in the command prompt:

The GUI (Graphical User Interface) your'e seeing is developed using tkinter. For this and every other libraries you can install by this command:

then it will be installed.

And if you want to know more on how this robot actually talks back please read this tutorials.

MIA-1's code is just an extended version of this.

As of commanding the arduino, computer sends a bite, the arduino takes actions according to the bites it receives, thus it looks Mia's movement and talking is asynchronous.

Now to get the code go the link below.

I've powered the robot using a 7.4 v lipo battery. The LDX227 servos are very power hungry (but are of good quality) so make sure they get at least 7.3 v any time. On the other hand the MG996r servo motors are cheap can be damaged easily, make sure they don't get more than 7.8V. So the highest power supply for this robot should be in between 7.4 to 7.8 volts.

Happy making! If you like this robot be sure to support by subscribing the channel for more amazing projects.

This robot is the first ever open source humanoid robot of Bangladesh!! And the cheapest of it's kind. I made this robot open source so that other students and interested people can know the logic of robots. May in future nobody will ever take robotics as science fiction. To the robot era!!