Sending and Receiving data with nRF24L01+ using only 3 pins of ATTiny85.

Sending and Receiving data with nRF24L01+ using only 3 pins of ATTiny85. 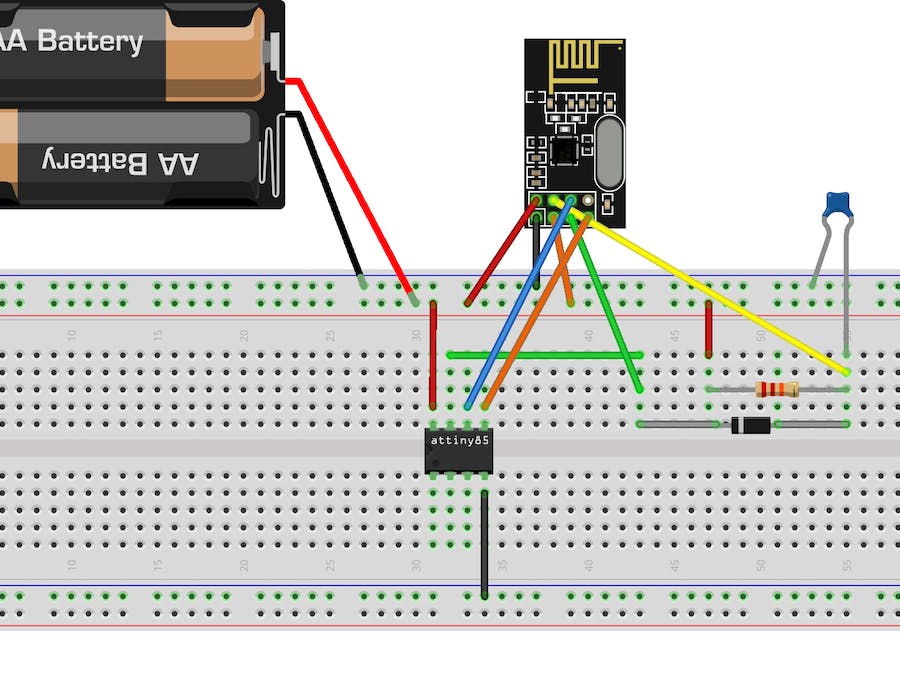 This would be the continuation of my previous project Programming ATtiny85 with Arduino Uno. Now with cheaper ATtiny85 in place I was looking for cheaper ways to transmit the sensor data. Which brought me to nRF24L01+ a cheap, low power RF transceiver. This seemed to be the better solution for me. But there was one problem, limitation in number pins in ATtiny85. I can't connect both nRF24L01+ and the sensor in it. So I was looking out for solutions and came across "nrf24l01+ control with 3 ATtiny85 pins". Here I discuss how I implemented it.

There will be two modules in here transmitter and receiver. The transmitter would be a ATtiny85 sending some data and the receiver would be Arduino Uno receiving the data via nRF25L01+. I utilize the RF24 library (http://tmrh20.github.io/RF24/). Follow the instructions given there and add it to Arduino IDE before getting started with this. I won't be explaining much about RF24 as there is a very good documentation on it.

The transmitter transmits a incrementing number every second. The ATtiny85 will send the data via nRF24L01+ using only 3 pins. I follow the instructions given by Ralph Doncaster on implementing it.

The components required would be

Connect the components as shown below

If this is not clear refer the fritzing file attached with this project. Though rest of the nRF24L01+ 's pins are 5v tolerant you should always give 3v3 power to the Vcc or else you will damage it.

When power source is connected the transmitter will start sending sequence of number every 1 second.

The receiver receives the data sent by the transmitter and received data can be seen in the Serial Monitor.

The components required would be

Upload the below code to Uno

Connect the components as shown below

If this is not clear refer the fritzing file attached with this project. Please note that Vcc should be always 3v3. In some Arduino Uno clones the 3v3 power might not have enough current which results in nRF24L01+ not working. Any one of the below methods are recommended to resolve this

With the transmitter and receiver ready now it time to test. Make sure the power supply to transmitter in ON. Connect the Arduino Uno to PC and open serial monitor in arduino ide. Its should work as below

With my little knowledge in soldering I made it permanent using perfboard.

This is a simpler module to demonstrate how the nRF24L01+ and how we can utilize only 3 pins of ATtiny85 to connect it so that the rest of the pins are available for reading sensor data. Feedbacks/Suggestions are welcome.