We created a speaker system that was controlled by an Android app but played through a speaker connected to a BeagleBone Green Wireless.

We created a speaker system that was controlled by an Android app but played through a speaker connected to a BeagleBone Green Wireless. 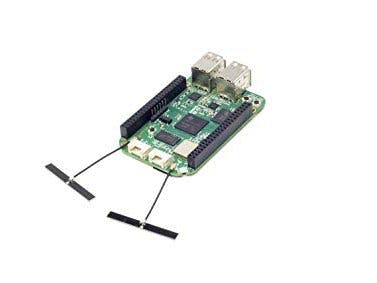 The goal of this project is to interface a simple android application with the BeagleBone. Songs will be able to be chosen/downloaded and controlled from the Android App and played through a speaker connected to the bone via a USB dongle. We had some features in mind that we were unable to implement due to various roadblocks in the project. One feature was the option to play through a Bluetooth speaker connected to the Bone. Another feature that would be neat to include is playing songs through YouTube so you can have a wider range of options to play.

To get the app you will need to:

USB Audio Dongle to connect the speaker to the bone

Commands to run to install various packages you will need:

Bluetooth module to connect to the Bluetooth speaker

If bluetoothctl gives you "waiting to connect to bluetoothd":

Commands to run to install various packages you will need:

Commands to run to pair and connect to a Bluetooth device:

Everything in this program is controlled from the Android device. Insert the USB Audio Dongle into one of the USB ports on the BeagleBone. Connect a speaker to the dongle using an auxiliary cable. Run the setup.sh file (./setup.sh) to make the BeagleBone discoverable via Bluetooth. The BeagleBone must be discoverable for the phone to find it. If the phone is unable to find the BeagleBone, the discoverable mode may have timed out, simply run setup.sh again. The BeagleBone should be running the perky_blue.py (may have to run as root, 'sudo./perky_blue.py') program found in the Git repo under the AppToSpeaker folder. Open the Android app. Start by selecting "discover" and then selecting your BeagleBone device to Bluetooth connect to. Select the song to play once the BeagleBone is connected to the device. You can also manually input a file to play that is not one of the songs listed. To do this, hit the "Play Custom Song" button, then enter the file name without the extension and press enter. If entered correctly, the song should begin playing and can be controlled from the app. If you want to download a new song onto the bone to play, press the "Download Song" button and enter the link to download the mp3 file. The bone must have an internet connection for this feature to work properly. Once the song is downloaded, you can use the "Play Custom Song" button to input the file name and play the song. Once songs are playing, they can be controlled by the buttons at the bottom of the application. From left to right, the buttons are: Pause, Play, Stop, Volume Down, and Volume Up. Closing the Android Application will end the program on the bone.

Picture of the app which controls the sound output

Our project lets you control music on the Bone from your phone. This uses a Bluetooth connect to send commands to the Beagle from your phone. You have all the commands of a basic stereo with the additional ability to choose new music to download.

Here is a link to a demo of the program: Project Demo

The basic structure of our program is an Android app sends instructions to an application running on the BeagleBone which controls the music. The app first 'discovers' the BeagleBone and connects to it via Bluetooth. Then, the user can select to play, pause, resume, or stop playing different songs. The user can also control the volume. The BeagleBone controls the music according to the command using mplayer. The audio output plays through a headset. Below you can see a diagram on the interaction of different parts of the system.

Here are some ideas that could be neat to implement in the future:

This project presented some interesting challenges. Using mplayer in the Python application cause the output of the audio to initially skip at some points. We tried many different things to solve this. The main solutions we tried we changing the command to include different optional settings. Many of these things were similar to manipulating the cache size and the amount of data read in before playback begins. Ultimately the issue was the sampling rate used during playback. Overriding this setting caused the audio to sound a lot better.

Another issue we had was getting the Bluetooth set up. Initially, we didn't know that we needed to use a Bluetooth dongle with the BeagleBone Black, so it was a lot of work before finally realizing we needed to purchase that. Initially, without the dongle, the black was just telling us there was no controller for Bluetooth so it was just always "waiting to connect to bluetoothd". After getting the dongle we still needed to run the the commands listed above to get the module for Bluetooth and start it up. After this setup we began trying to connect the speaker. While the pairing process was successful, the BeagleBone would not connect to the speaker. We kept getting the error "Failed to connect: org.bluez.Error.Failed whenever we tried to run the connect command. We tried a different dongle and installing different packages to monitor Bluetooth, but no luck. Some insight that we have for this problem in the future is that there are different Bluetooth protocols and we think that maybe we need the Bluetooth with the speaker is not compatible with the BeagleBone Bluetooth. This is only a hunch as we could find no information on this topic. Also, another group working with Bluetooth for audio output said the Bluetooth connection only seemed to be reliable if there was something going on constantly (playing music always).

Since we were able to have the phone connect via Bluetooth to the BeagleBone, we tried to implement a similar system with another speaker. We tried to set up one Bone to connect to another via Bluetooth then have each BeagleBone drive a different output. We used a similar script to the script that was setting up the Bluetooth connection between the phone and the BeagleBone. After working on this idea, it seems to us that the BeagleBone does seem to set up a connection well. The phone to BeagleBone connection is set up initially by the phone "discovering" and connecting with the Bone. When the Bone tries to do a similar thing with any other system we see many errors. We never found what is causing this behavior but we know that you can set up a connection from the BeagleBone. When looking over the various groups for the Bone with similar topics we found that many people were having this issue of connectivity with the Bone without luck of a solution.

Besides these hiccups, creation of the app to outputting sound went smoothly. The audio ended up just being driven by an audio dongle in the BeagleBone. The project allowed us to experiment with different peripherals that we thought could make an interesting project. We found new things along the way that we were unaware of that we were able to bring together to make a functioning system. Some things that would be interesting to pursue is sending the music files to the BeagleBone so that you could play any song that you had on your phone. There is also probably a way to get the music from other apps to play on the Beagle (basically just use the Beagle as the audio out for the phone). Overall, while there were some difficult parts, we are happy with the outcome of the system as it presented us new ways to connect to and use the BeagleBone.