I wanted a "busy box" that could be operated while sitting, so I built this tiny sci-fi inspired dashboard with panels for instrumenting it.

I wanted a "busy box" that could be operated while sitting, so I built this tiny sci-fi inspired dashboard with panels for instrumenting it. 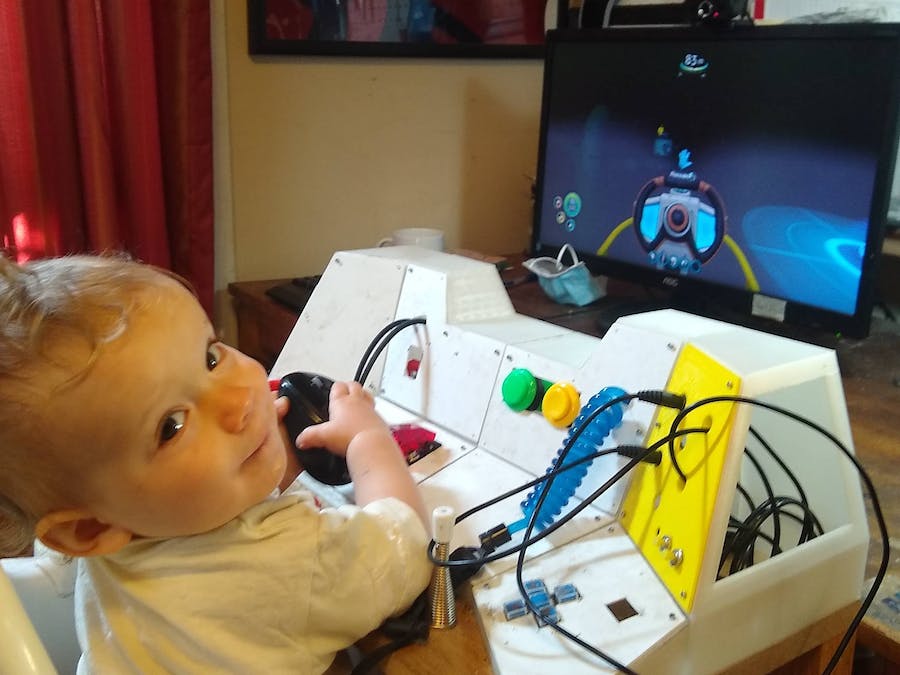 This is the third entry in an unofficial series on human-centered design for young minds. It's the least electronic of the three, but I enjoyed the lessons (and tbh, the pictures) that came out of it, so I deemed it worth writing up.

I wanted a busy box for my kid, but the ones I found were all boards that laid flat on the ground for them to fiddle with while laying on top of them. I wanted one that my child could play with while seated in his high chair, and eventually while sitting on the ground with it in front of him. I could've just made a flat board that was slightly inclined, but I decided I wanted it to feel like the instrument panel of a vehicle or a command center of some sort.

This led to several decisions around which the rest of the design was built.

1) I wanted to design a shape that wrapped around a user at various angles.

2) I decided to build a short table sized to fit snugly over Calvin's high chair tray and build the panels on top. This table could also allow the busy box to be played with while sitting on the ground.

3) Because I didn't know what modules and wingdings I would add, I needed the panels to be modular, so I adopted a design choice directly from the inspiration: the interactive surfaces would be flat panels that screwed onto a frame, so they could be removed to access the interior and service components.

Ultimately, it worked out great. The biggest surprises were first that I never actually bothered to give it any powered modules as I'd expected. He found it fairly interesting without power, so I just resolved to add those features when he lost interest.

Second, he didn't outgrow it by losing interest, he outgrew it by gaining interest in using it as a stepladder. By the time he was one, he didn't just crawl on it, he would move it across the room and position it to give himself the necessary elevation to reach things. Before he was even walking unassisted he was using it as a walker and then climbing on it to inaccessible areas.

This isn't what it was designed to teach him

If you'd like, you can find all the parts files available for download here, but the primary audience for this write-up is designers looking to make something similar from scratch. It's hard to really confidently guess what ideas will land with a user who can't speak, so I hope the choices I made and outcomes prove useful to someone starting on a similar project. That said, the parts are all available, so if you like what you see, I'd fully endorse building a replica as your starting point. It worked out well.

For inspiration I looked at common items and designs of busy-boxes and busy boards, then at consoles and asked how I could build a frame onto which I could add and modify the items a user interacted with.

The items on boards were pretty intuitive. Things around the house, small items that move, etc.

The console was, in concept, easy to conceptualize. Panels bolt down. But I needed to design and print the structure the panels bolt to.

This led to the basic concept: I would build a simple table that could stand freely or sit securely on a high chair. Then I'd model the basic geometry of the structure, break it into parts, and print and assemble them.

Edit: I found these after making this, but they're great resources I wish I'd seen before:

The CAD was a little more involved than I intended, but that's mostly a reflection of personal choice to add features for aesthetic purposes that weren't strictly necessary. The basic gist, though, is that I modeled two levels: one at a gentle angle and a second tier at a sharper angle, then faceted the faces as necessary. Then, I segmented the whole, added holes for the panels and created shells. Then I subtracted more material to optimize the internal space and the strength. I also added some slopes and angles to make it possible to print all of it without support, which was a little excessive, but I just don't like wasting material on support. Overall, this produced four unique pieces each printed twice, mirrored horizontally.

The board itself is just 1/2" plywood of some kind with 6" legs, sized to sit comfortably over an Ikea high chair. There are small rounded pegs on the underside to prevent it from sliding off if pushed.

I could have just glued the whole thing together, but I'm kind of particular about modularity and repairability, so instead I added M2 screw holes to the junctures where necessary, in addition to drill holes for attaching the overall structure to the board.

On thing I love is form-driven fashion. The idea was to make this look like something with a bit of old-school Apollo feel as well as befitting a sci-fi setting like Firefly, and the nice thing is that access control panels really define their own look based on their actual need. They're flat sections with holes cut out to install buttons, switches, and displays that are bolted down, and that's what I wanted. Initially, for some reason I thought it made sense to use a bunch of high impact polystyrene (HIPS) sheets as panels. I guess I thought it would have a better finish and allow me to tinker more easily with layouts than designing and printing, but this was dumb. HIPS is a great material, but it turns out that it's much easier to just model the panels and print them, especially because the attachment holes are so much more precise, so you can see the final design has both.

1 / 4 • Watching things click is what makes this whole project 100% worth it.
The Fun Things

I iterated this. I found stuff around the house he liked to play with and would fasten it in some way. I went on SparkFun and bought a bunch of the knobs and switches I coveted back when I was a child walking through Radio Shack. I always meant to plug these into an Arduino Mega, but I kept waiting for him to lose interest first and he really just transitioned to a new interest -- climbing -- before that happened, so I called the project a success and dismantled it for future projects.

As you can see, there is a door stopper. That was an early hit. The buttons didn't make as big a splash as I expected, but they still got use. The bungee strap and retractable badge clip were both BIG winners. The switchboard took a little more time to catch on, but was awesome to watch him discover. Similar with the covered switch. He needed time to work it out, but that's what it's for: to give him things to figure out.

The direction buttons were superfluous. He didn't care about them. If I'd kept it longer I definitely would have added sliders and turnable dials, as well as an LCD display and a speaker. If you want to go absolutely nuts, I recommend checking out https://teenage.engineering/products/po. I don't know if incorporating this experimental synth would be smart, but I'd love to see someone daring try it.