Encase an OpenScope MZ in a Nerf football to acquire accelerometer readings while the ball is midflight.

Encase an OpenScope MZ in a Nerf football to acquire accelerometer readings while the ball is midflight. 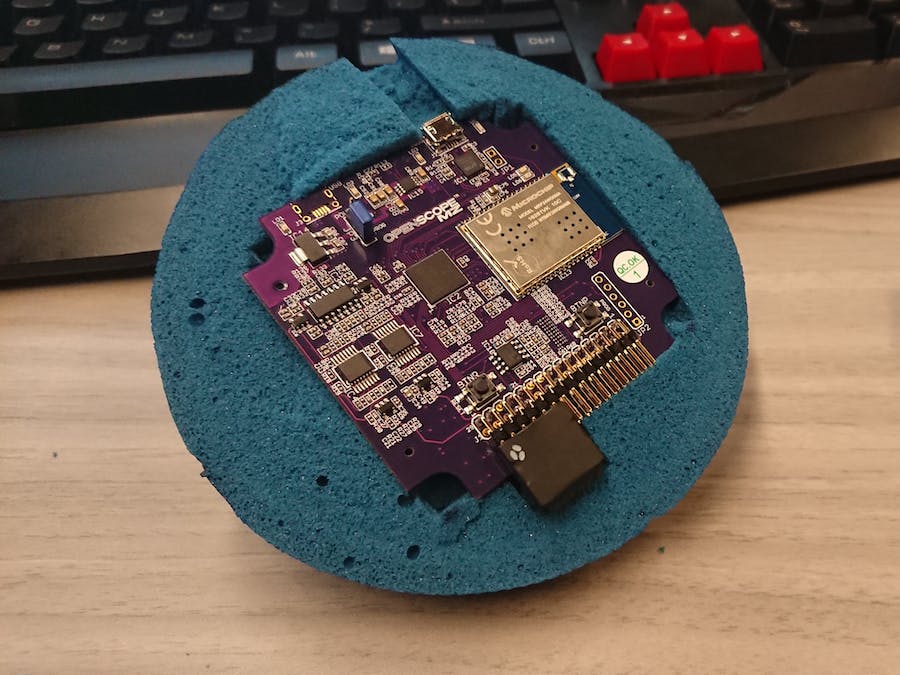 The motivation behind my project was to find a way to monitor accelerometer data during the flight of a nerf football. I knew that doing so with a benchtop oscilloscope would be difficult or near impossible, which makes the OpenScope MZ the perfect instrument for the job. The OpenScope MZ is a USB/WiFi oscilloscope and the WiFi capabilities of the scope afforded me the ability to acquire data untethered in a creative way. By embedding the OpenScope and an accelerometer inside a Nerf Football, I was able to sample the output of the accelerometer as the ball was flying in the air or as it was caught, something a traditional benchtop oscilloscope certainly doesn't make easy.

Using the OpenScope through the WaveForms Live interface meant that I didn't need to write any software in order to get the system working. I only needed to work through the physical assembly portion of the project. I viewed the accelerometer data through WaveForms Live was done on a laptop connected to the same wireless network as the OpenScope.

How This Project Works

The accelerometer X and Y axis outputs are connected to Channel 2 and Channel 1 inputs of the OpenScope respectively. The scope is powered via USB by a battery pack. All 3 components were inserted inside the Nerf Football, with the accelerometer in the nose of the ball, the OpenScope sitting behind it (seen in cover image) and the battery pack occupying the rest of the ball.

Before completing assembly, the OpenScope was configured to connect to a network over WiFi, giving me wireless access to the device with my laptop. The OpenScope is set to connect to the network automatically each time it powers up. After completing assembly and powering the device on, one of the input channels on the OpenScope is set as the trigger source with a level of 1 Volt. The accelerometer is powered off the Channel 1 DC out, which is configured to supply 4 Volts.

The next step for this project is to use the data logger function to log long term data to the SD card during practices. I'll be using the data I collect to see if I can improve my throw.