Adding a much cheaper alternative to the Carter and Kaya designs reference using a Lego EV3 set.

Adding a much cheaper alternative to the Carter and Kaya designs reference using a Lego EV3 set. 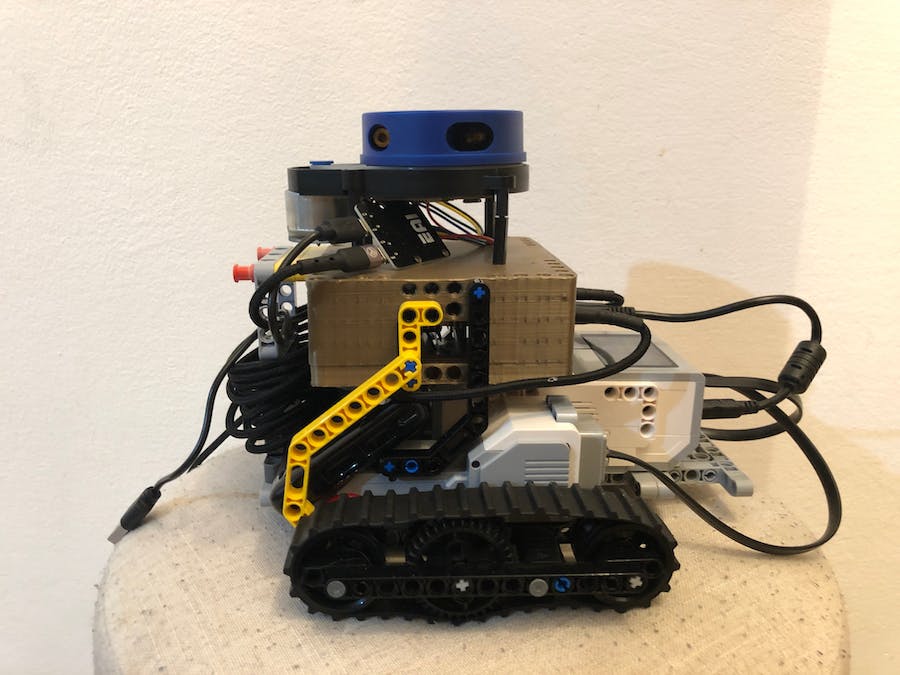 In this project, I will document the construction of a tracked vehicle made with Lego Technic parts and motors, enhanced with LiDAR and controlled by a Jetson Nano board running the latest Isaac SDK. Jump to Part 8 or 10 for a full demo of the autonomous navigation.

The project consists of the fallowing components:

Why Isaac SDK and not ROS?

Choosing this path does raise some challenges:

Download and flash the latest image for EV3 (ev3dev-stretch) on a microSD or microSDHC card. MicroSDXC format is not supported by the EV3 brick.

This part was especially hard to setup correctly. Ubuntu 18.04 (host computer and Jetson Nano) is using GLIBC_2.28 while ev3dev is using Debian stretch and GLIBC_2.24. Anything compiled with the default arm-linux-gnueabi-g++ compiler configuration was dependant on GLIBC_2.28 and won't run on EV3. Statically linking didn't work as anything more complex than a hello world was causing segfaults. The solution I found was to dynamically link everything except the math library. You can find more info in the jetson-ev3/toolchain/CROSSTOOL file. Another solution is to use a docker image of Debian 9.

In the next part I will post lots of Linux commands. Because there are three systems involved I will post them exactly as they would look in my terminal, meaning:

I used a USB A to mini cable to connect the Jetson board with the EV3 brick using these steps.

Try to ssh from the Jetson board:

Isaac has a tutorial explaining a very simple Codelet. I suggest doing this tutorial first. It will introduce you to the concepts needed to build any app running on Isaac.

Now go to the jetson-ev3/apps/ev3/ping_pong/ directory. This is a modified version of the previous tutorial, with a twist, we'll send the ping to the EV3 brick.

Most of the files are familiar from the previous tutorial. We will use Cap'n Proto RPC for calls between Jetson and EV3. Cap'n Proto is used heavily for communication between various Isaac components so it makes sense to use it here. For this we need some new files:

Compile the the ev3_pong server:

Copy it to EV3 using scp first to Jetson and then to EV3.

Build and deploy the ping-pong example to Jetson:

More informations about how to deploy and run your apps on Jetson here.

If everything worked you should hear the messages sent by the Ping component into EV3's speaker.

8.Controlling a motor from Isaac

Same principles, just a bit more complex. I used another of the Isaac's tutorials to interact with an EV3 motor:

moving a lego motor from Jetson

The tutorial uses a Segway RMP base. As I don't have one lying around or 10000$ to buy one, I created a driver which will control the EV3 motors instead. The code is here.

The server that runs on EV3 is here and can be build and run with the following command:

I used the virtual joystick from Sight as explained here.

Ev3ControlServer server will respond to 2 calls:

The kinematics are explained in more detail here and here.

I used the proportional_control_cpp sample app to drive the robot 1 m and report the EV3's Odometry (linear and angular speeds) data in rotary pulses (tacho counts) per second. Using the computed travel distance (by Isaac) and measuring the real distance I came up with a constant to adjust the values reported so they match the real results. This worked well and the results were reproducible many times and not only in straight lines. You can also compute this values by using the radius of the wheel (or track in our case).

The base is very similar to Lego's EV3 Track3r, one of the official models for the EV3 kit: https://www.lego.com/biassets/bi/6124045.pdf

The case for Jetson Nano is from here: https://github.com/3D-printable-lego-technic/PELA-blocks

An Isaac App is made out of three major parts:

A subgraph can be reused in many apps. In fact the isaac's navigation stack is used as a subgraph.

The driver (jetson-ev3/packages/ev3/BUILD) responds to the same commands as the Segway RMP base driver. That means it will work with many apps that work on Kaya or Carter, making it a third option and much cheaper!

I adapted some the apps created to showcase the Carter and Kaya bots:

For running in autonomous mode is important to have good odometry. This is used to estimate the robot's position over time. Let's adjust it using the ev3 app:

We need to estimate two things:

The formulas for linear and angular speeds are:

Finding the angular speed is easy: is the difference of the right and left motors divided by the base length.

Finding the linear speed is a bit more complex. We have 3 cases:

We will use the manual control to rotate the robot 360 degrees in place. This is done by moving the left and right motors at opposite speeds. Knowing the speeds of both motors we can compute the angular speed.

I will drive the tank around, and at the end try to get it back on the starting location. The odometry data should be as close as possible to 0 at the end if we are computing the speeds correctly.

Part 6: Getting everything together

Ok, so we got so far just to have an expensive RC tank? No, we can use all the different parts from Isaac now. Issuing voice commands for example and get the robot to move autonomously. Check the voice_control for an example of this.

It uses the audio and machine learning gems from Isaac. What is a gem? As stated in the manual: "GEMs: A collection of robotics algorithms from planning to perception, most of them GPU-accelerated."

I trained my own RNN following the steps explained in this tutorial. Just make sure you have a lot of data, especially for the unknownkeywords/silence/random noise case.

I trained mine to recognise 3 words: "jetson", "left" and "right". You can find the saved model here. With these 3 words we can compose 2 commands: "jetson left" and "jetson right".

The detection part is described here, in it's own subgraph, ready to be used and reused.

Basically what it does is to listen to the microphone and if one of the commands is picked up it will output a voice_command_id. It uses the previously trained RNN for that.

We can take that detected_command and pass it to our own Codelet:

from the Codelet we can generate a Goal and publish it:

And from there we pass the goal to the Global Planner.

Where all the magic happens:

Unfortunately it will only work in 10 W mode, not 5 W, which is a bit too much for my battery. In 5W mode the inference takes too long:

I tried with smaller RNNs and increasing from 2 available cpu cores (nvpmodel -m 1) to 3 but didn't help much. It decreased the time to 30ms for the inference, still too long for accurate results.

To create a map we need to run one instance of Isaac on Jetson and one on the host computer. Mapping takes a lot of resources, more than Jetson Nano can handle.

Don't forget to change the file apps/ev3/gmapping_distributed_host.app.json with your Jetson IP:

To get a relative good map I did three passes back and forth.

Now if I load the map, the robot will detect it's position:

When I used the YdLidar component to get a scan, the Y coordinates (left-right) were all mixed up (in reverse). Things on the right were detected on the left. This LiDAR spins clockwise, so the angles are all opposite to what Isaac expects. It seems it is possible to specify the transformation between robot's and LiDAR's frames, so I did a bit of reading about quaternions (I linked bellow a very good source). To do a roll (rotation around the X axe ) the LiDAR's frame should be initialised like this:

The format is: [qw, qx, qy, qz, x, y, z], or you can use a different format as described here: https://docs.nvidia.com/isaac/isaac/doc/faq.html

Unfortunately it didn't work, it always crashed the app, so I had to create a small codelet to reverse the angles reported by the scan. The codelet is here: jetson-ev3/packages/lidar_angle_changer/. I can redirect the scan through that codelet and get the results in robot's frame:

Finally let's run a demo for the full autonomous navigation:

Both locations of the robot and the end goal are shown as red circles. The goal marker can be dragged on the map resulting in a new goal. The map from the left is the local map. It is generated from the LiDAR data. It will show the walls and obstacles, like the carton box.

Let's create a mission for the tank, now that we have a Pixy2 camera. It will go like this:

When the Pixy2 detects the target, the onboard LED will light itself. This can be seen in the video.

And the picture taken:

The picture made by Pixy2

The source code can be found here. It uses a state machine to model the requirements of the mission.

It has the following states:

Some bloopers when working on the autonomous navigation: 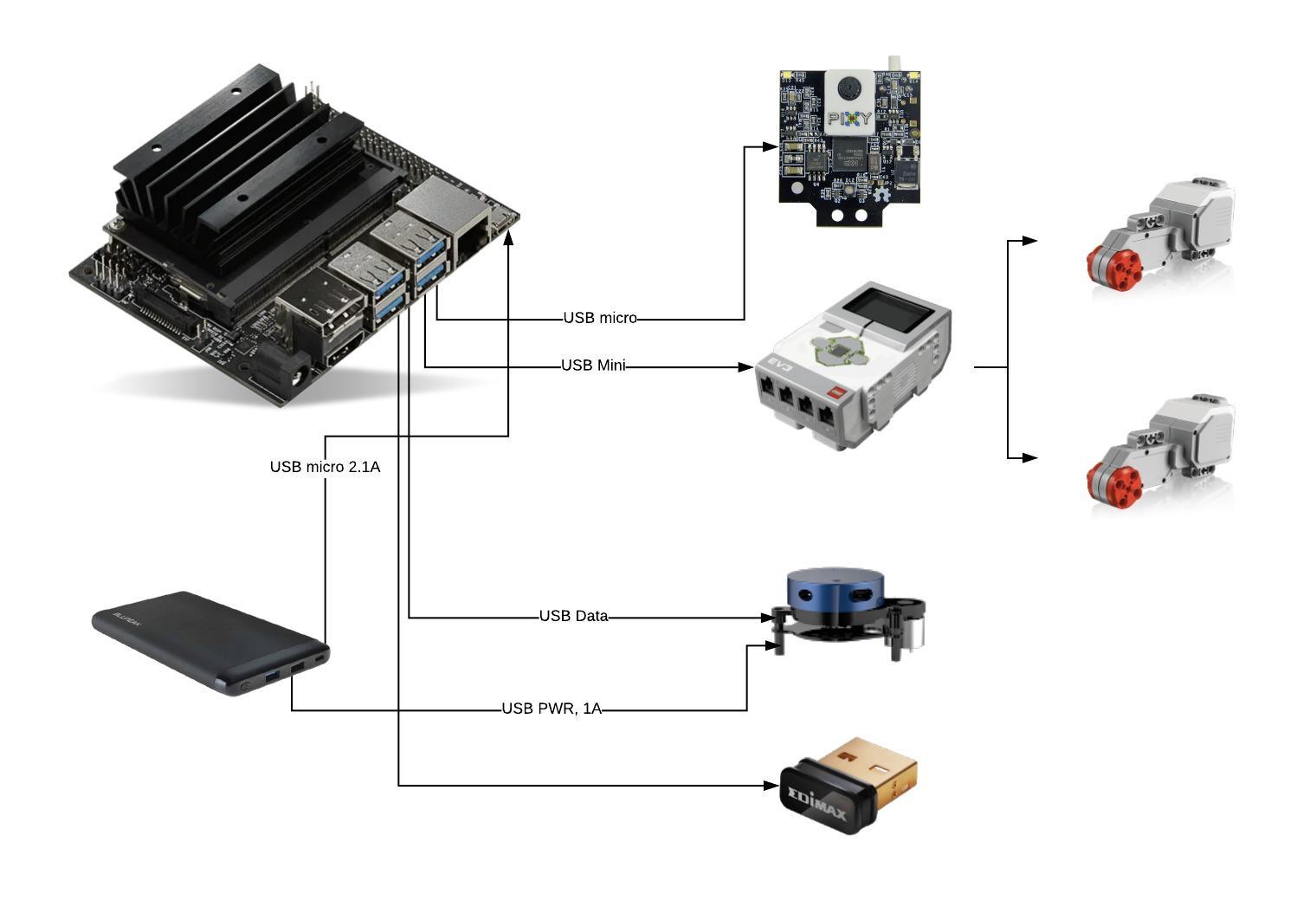