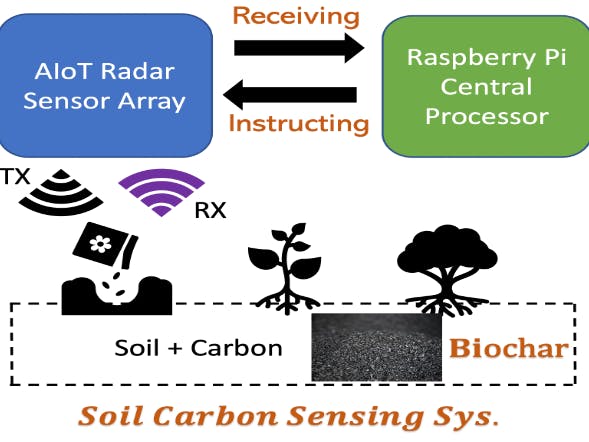 Soil carbon is vital for fighting climate change, supplying water, and sustaining biodiversity. It is necessary for the important processes in the environment, which benefit not only plants but also humans. Human activities, particularly those that include the use of fire to burn biomass, deplete soil cover and result in immediate and enduring losses of soil organic carbon. We must minimize soil carbon loss due to erosion and greenhouse gas emissions into the environment, particularly carbon dioxide and other GHG.

Carbon sequestration is a process of capturing and storing atmospheric carbon dioxide, which means it can be used as a method for climate adaptation due to its established favorable impacts on soil erodibility, water retention capacity, temperature, and gross primary production. One of the carbon sequestration techniques is applying biochar to soil. Biochar is a carbon-rich product of the thermochemical conversion of organic material that can be used as a soil amendment due to its resistance to decomposition, and its influence on nutrient dynamics. In other words, biochar can be applied to soil to improve soil functions and mitigate GHG from biomass that would otherwise decompose naturally into GHG. Using techniques like applying biochar production to the soil to minimize soil carbon loss, detecting which agricultural region is most in need has proven difficult. In other words, it is still a challenging problem to quantify the effect of biochar applied to the soil in terms of carbon sequestration accurately, quickly, cost-effectively, and on a large-scale field. This proposal, for the first time, is to invent an extensive lab solution to demonstrate the fine-grained (detecting in the local area) soil carbon sensing method (Microwave scanner) using a coarse-grained platform (Unmanned Aircraft Systems (UAS)).

This device (shown as Figure 2)becomes an enabler that can be used as the sensor payload for drones or unmanned ground vehicles (UGVs). We plan to design a portable device (iPhone sized) that can transmit microwaves and receive their reflectance signals to infer the amount of soil carbon and its related COx species. We will compile a compressed machine learning model on a local device (an edge computer) to process, label, and predict the soil carbon information in real-time. In addition, this low-cost portable device can be equipped with a swarm of drones and/or UGVs that can form a microwave soil carbon "imager" (See Figure 1) to achieve scale-up toward a cost-effective method to detect and predict local soil conditions.

In this section, we want to verify how different amounts of biochar correspond to the microwave reflective signal in the frequency domain. We separated into six sets, which put 0g, 50g, 100g, 150g, and 200g, of biochar (soil carbon), respectively, into the same amount of soil (200g). The reflective signal has been recorded after mixing well. After the feature was collected, we divided the collected data into train and test sets for SVM multi-model development and evaluation. The train and test set ratio is 2:1. Figure 2 depicts the signal's significance of different biochar amounts through the time and frequency domains, respectively. and we found that the SVM classifier achieves 74.0% (see my paper for detail) of biochar usage amount recognition accuracy. This result proves that it is feasible to identify biochar intake and other quantities such as moisture. This assessment establishes the practicality of deploying mobile microwave sensors to monitor soil conditions and demonstrates the potential for cost savings as the target area expands.

Overall, with the involvement of machine learning technologies, soil carbon content identification has been successfully completed for the first stage. The next is equipped with this device under swarm UAS/UGVs to realize our solution in a large-scale field.