A small robot for kids to learn, play and discover the world of robotics.

A small robot for kids to learn, play and discover the world of robotics. 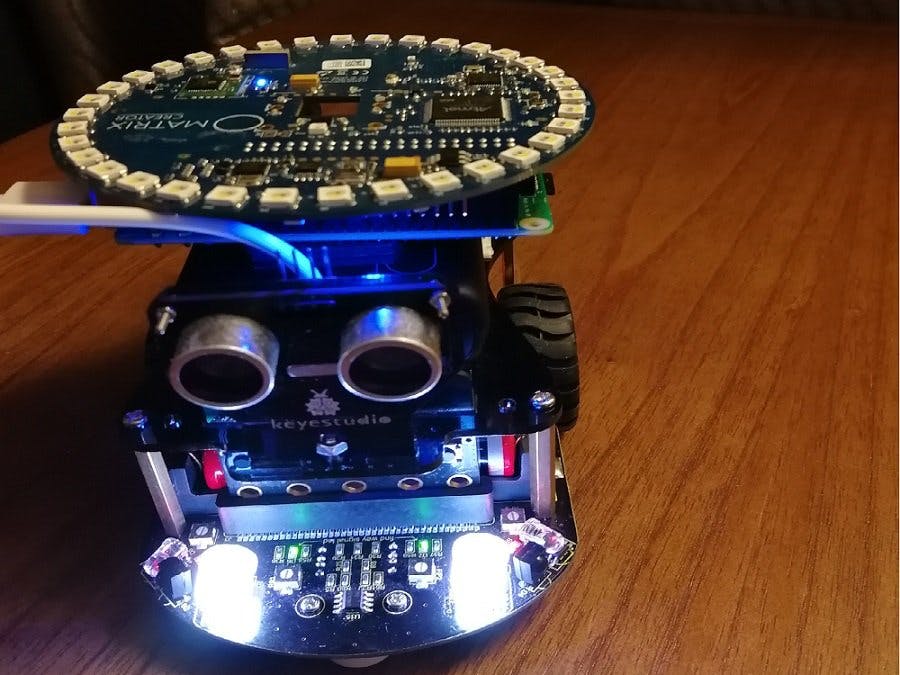 The goal of my project was to use the power of Matrix Creator board in conjunction of Snips AI platform to build an interactive robot for children to play, learn and discover the world of robotics.
For this project, I used a robot chassis from KeyeStudio. It comes with motor drivers to control both motors and is powered by Micro Bit board.

The Micro Bit (also referred to as BBC Micro Bit, stylized as micro:bit) is an open source hardware ARM-based embedded system designed by the BBC for use in computer education in the UK.

The device is half the size of a credit card and has an ARM Cortex-M0 processor, accelerometer and magnetometer sensors, Bluetooth and USB connectivity, a display consisting of 25 LEDs, two programmable buttons, and can be powered by either USB or an external battery pack. The device inputs and outputs are through five ring connectors that form part of a larger 25-pin edge connector. There are two official developing environments on the micro:bit foundation web site: Microsoft MakeCode and MicroPython.

MATRIX Creator (with Raspberry) are stacker on the top of the robot with an USB link to micro:bit board establishing a serial connection allowing raspberry to communicate with Micro Bit microcontroller.

Coupling Matrix Creator with Raspberry and Micro:bit offers a great platform to make this robot alive. I will demonstrate the concept by exploring 4 use-cases:

- A voice controlled game : I have implemented a voice controlled version of the famous game : Simon Says (color based). This game aims at developing memory capacity for children. The gameplay is simple : a round in the game consists of the device lighting up LEDs with one out of for colors (red, blue, green and yellow) in a random order, after which the player must reproduce that order by saying the colors. As the game progresses, the number of colors to be reproduced increases.

https://console.snips.ai/store/en/skill_pbkBz34zVZ1 (Link to the Skill in Snips AI platform)

- RFID controlled game : I have implemented a game (from my own creation) called Color Mix. It aims at easing learning of primary colors ( red, yellow and blue) and the colors we obtain when mixing them together. it is based on the 35 LEDs of Matrix Creator. On each turn, a color shows on LED0 ( blinking), the player can choose two options (moving to the left or to the right) by approaching a double sided RFID tag . The color 'advances' in the direction chosen by the player with respect to the different rules below:

Unfortunately, I haven't found a way to decrease the brightness of LEDS thus the video is blurred but the game has a beautiful effect when you look at the board directly

A child can control the robot by voice. It is a good way to learn directions (forward, backward, left, right) , distances in centimetres and angles in degrees. to move a robot just say in which direction you want it to move (right, left, forward, ahead, back, reverse...) and the distance or the angle. You can also choose the speed (fast, slow, moderate....). A funny game could be an obstacle avoidance game where the child drives the robot to reach a destination in a limited number of commands and avoiding obstacles. 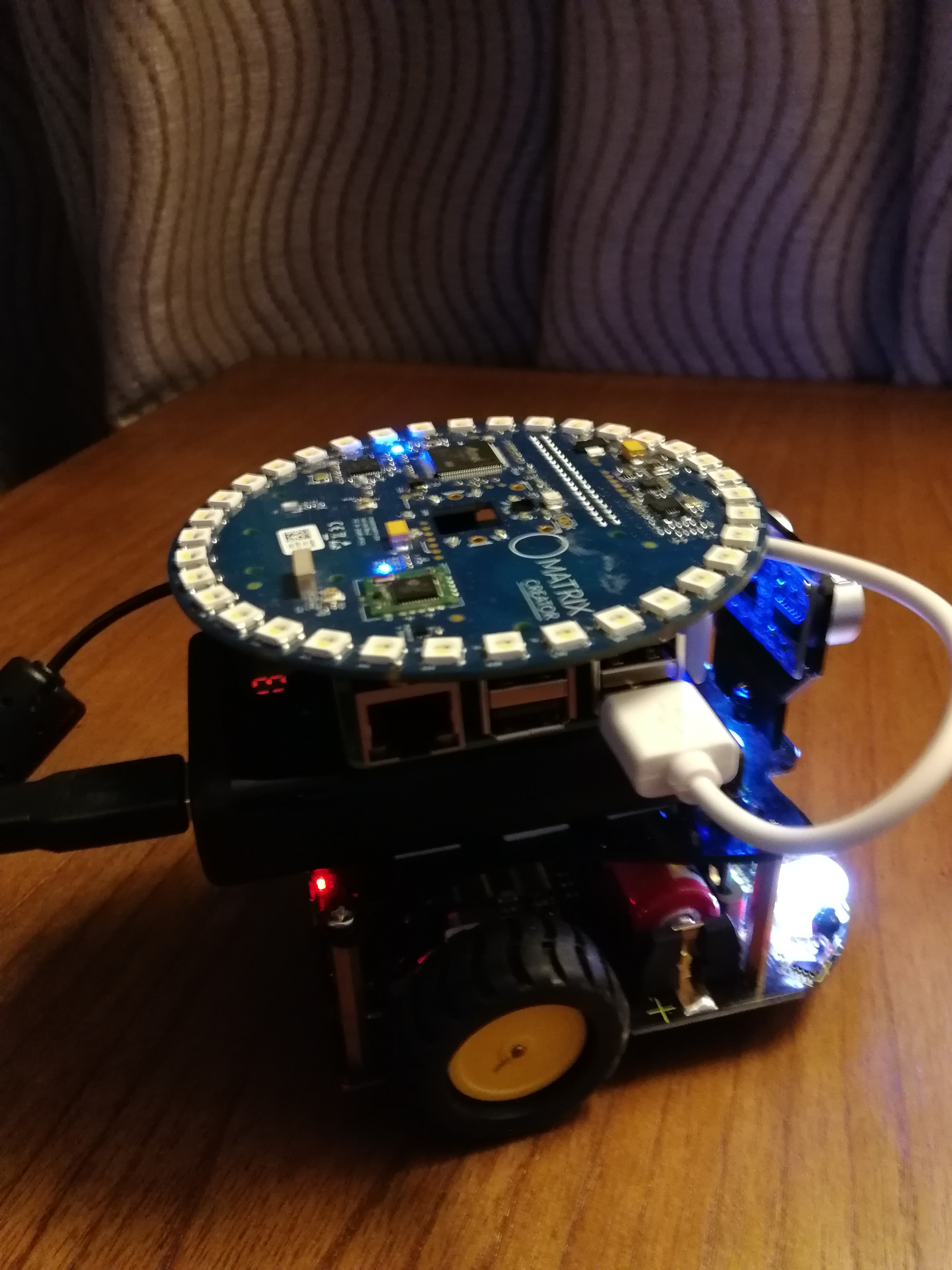 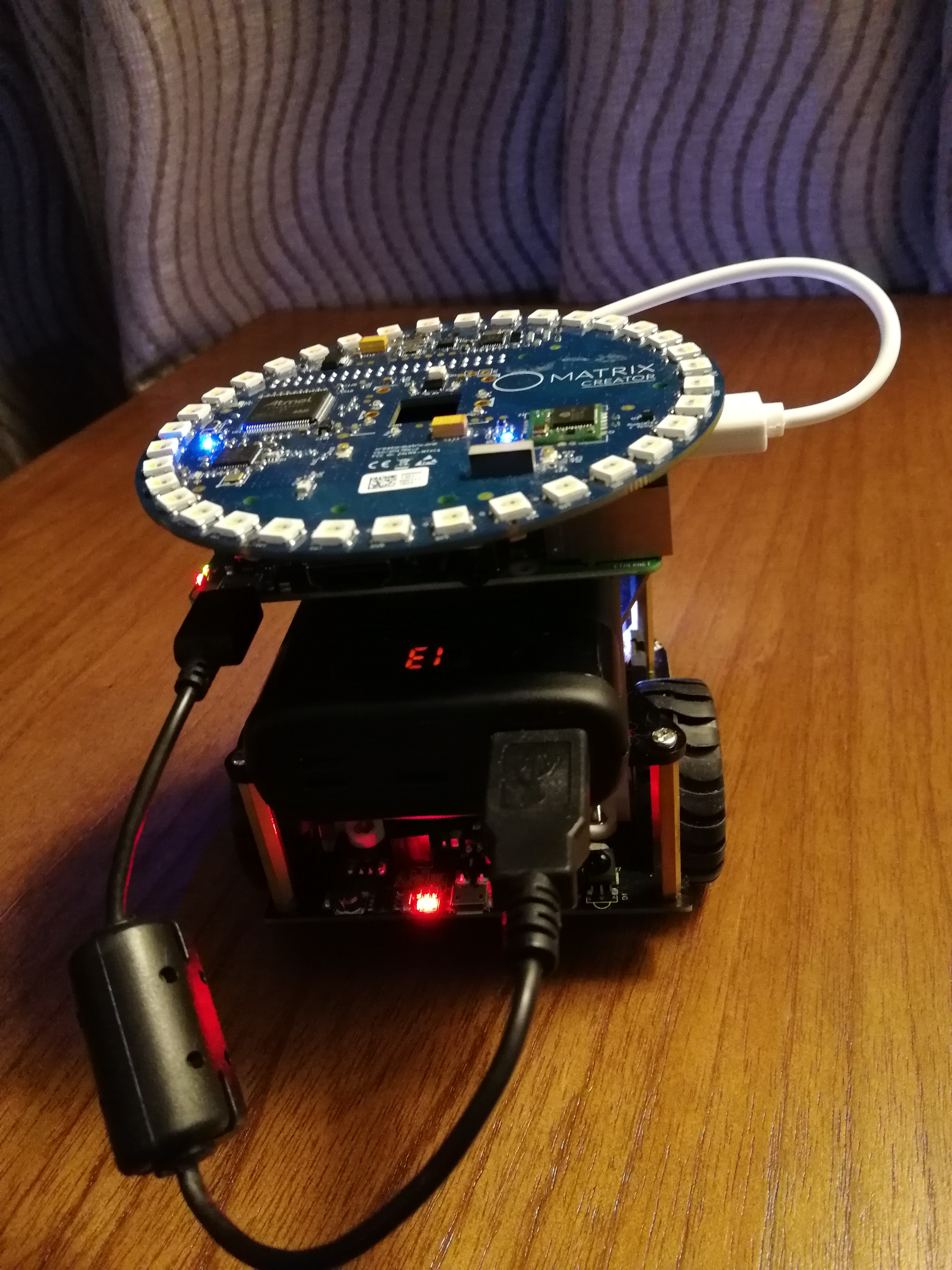 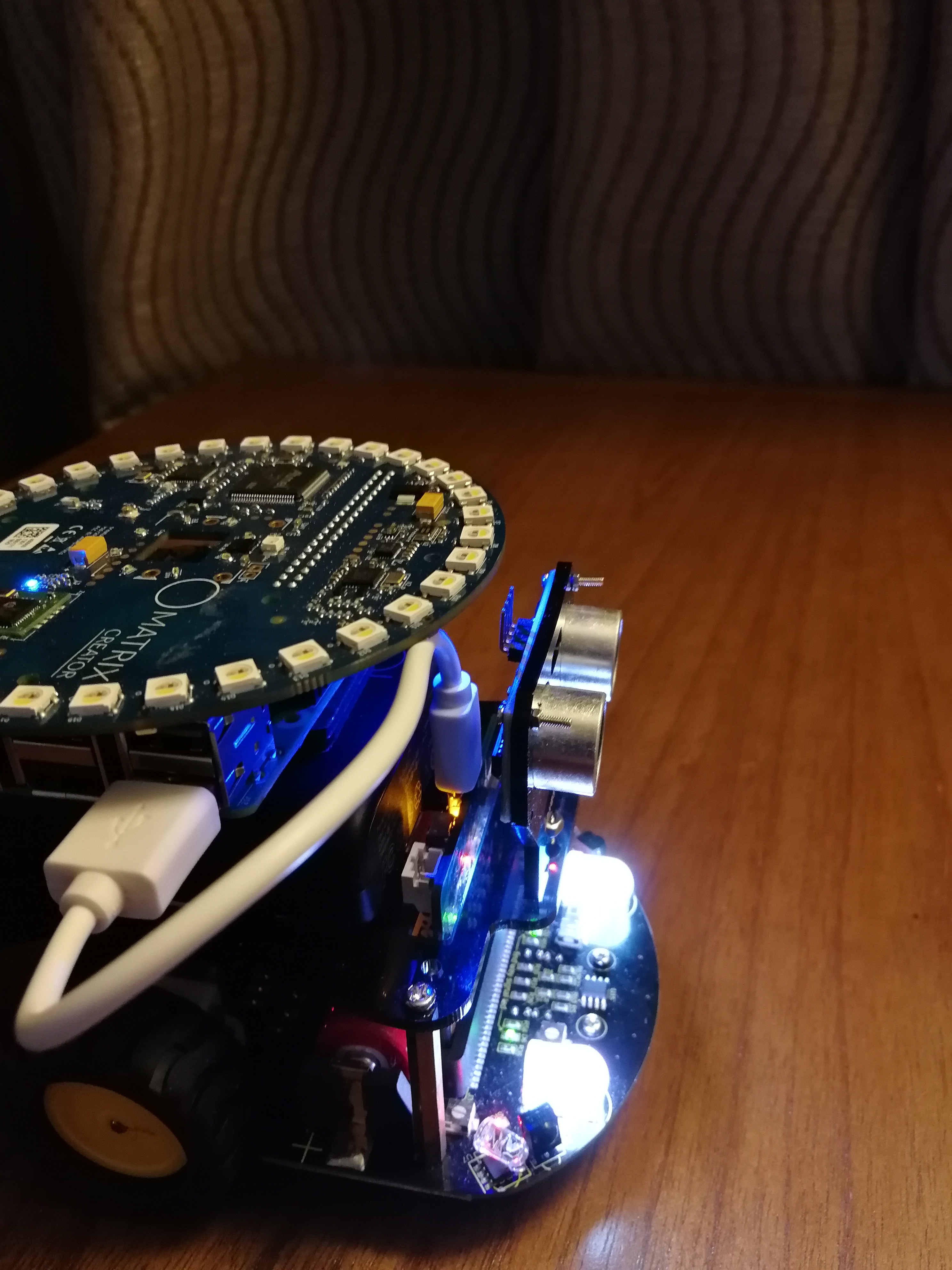 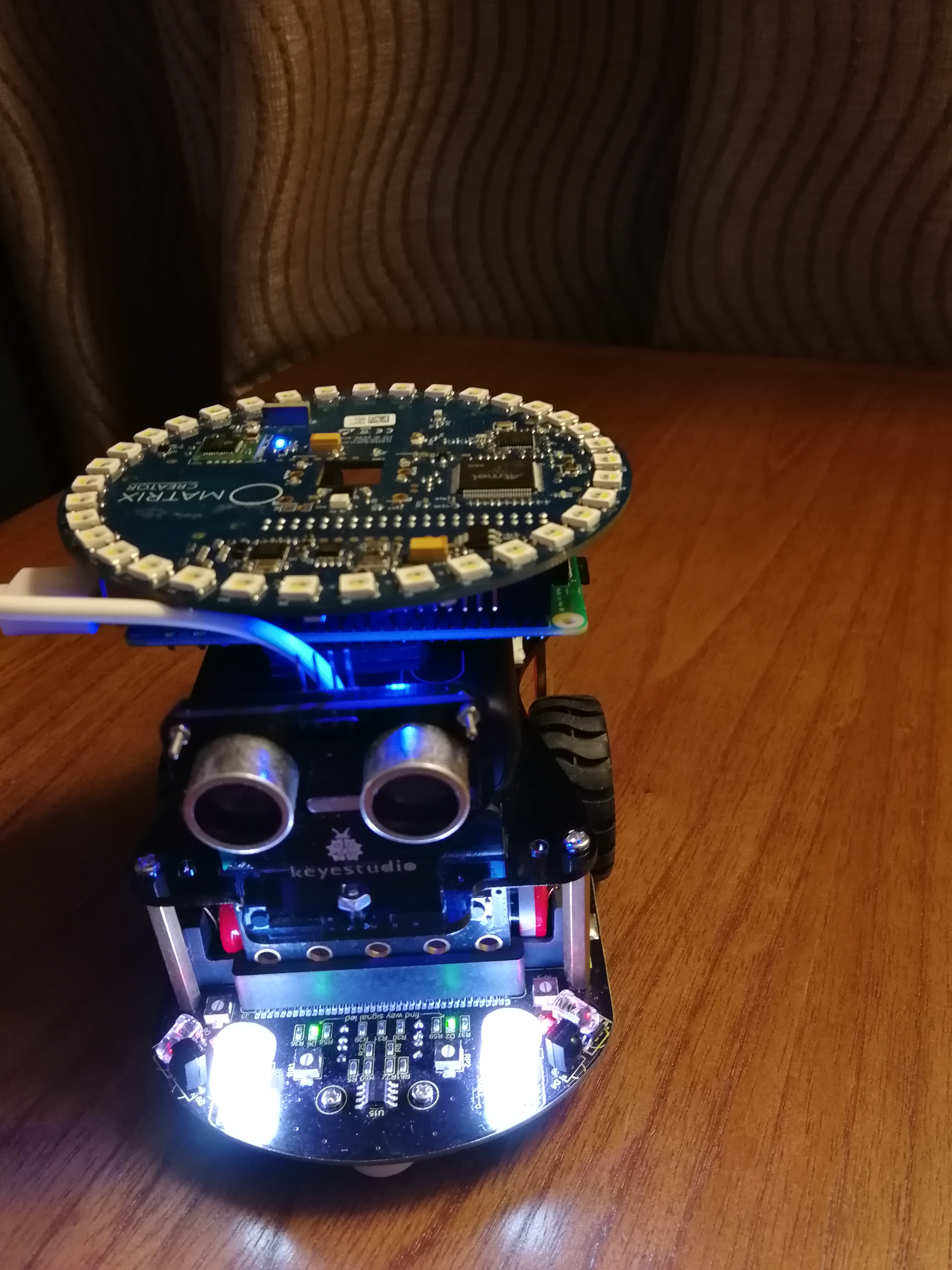 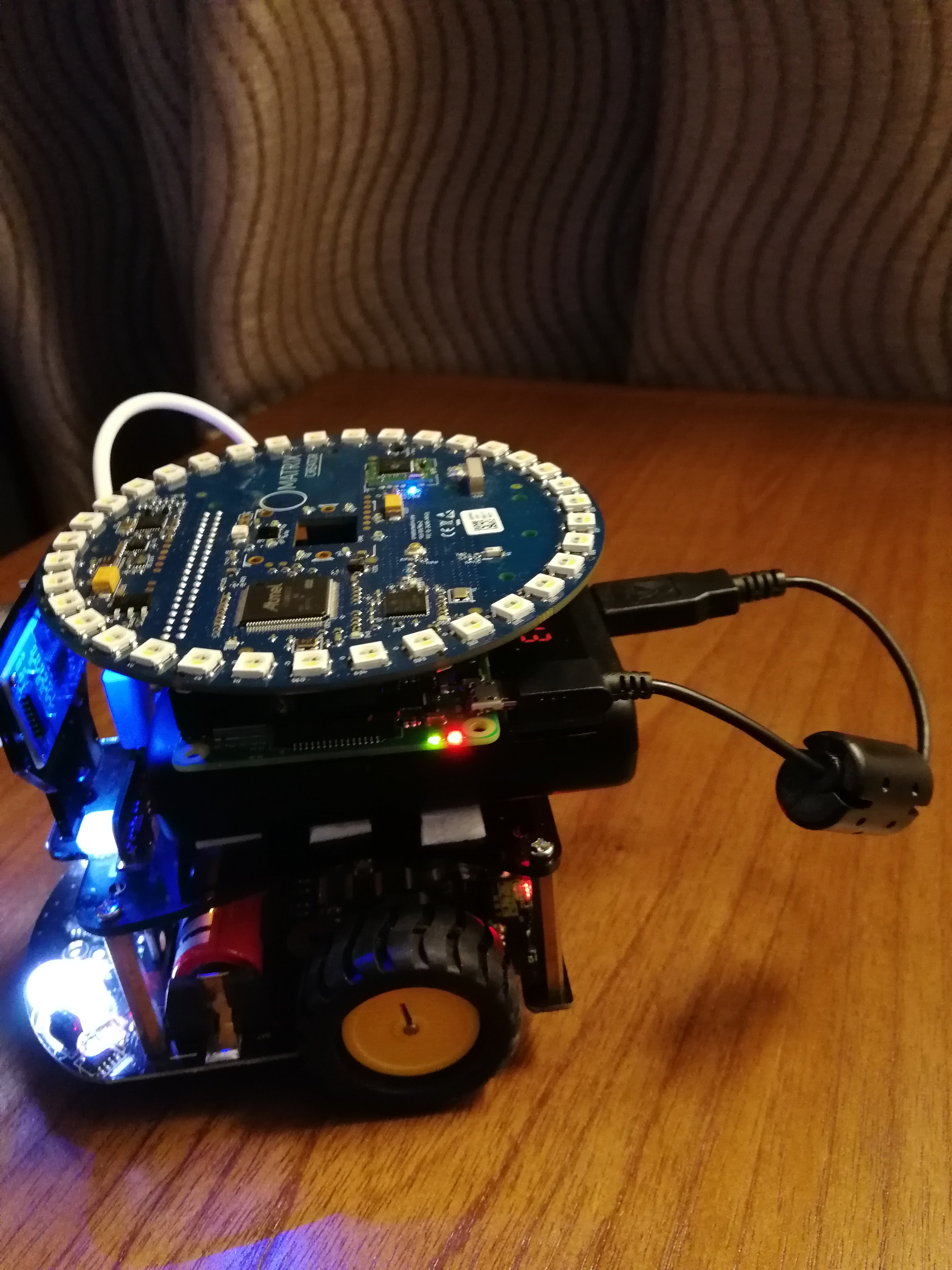