I was looking for another BOT to build and then two new SBC's were announced or was it three SBC's? ATMegaZero ESP32-S2

What Do I Build Next? A Pico-ATMegaZero BOT part 1 of 2

What Do I Build Next? A Pico-ATMegaZero BOT part 1 of 2

I was looking for another BOT to build and then two new SBC's were announced or was it three SBC's? ATMegaZero ESP32-S2 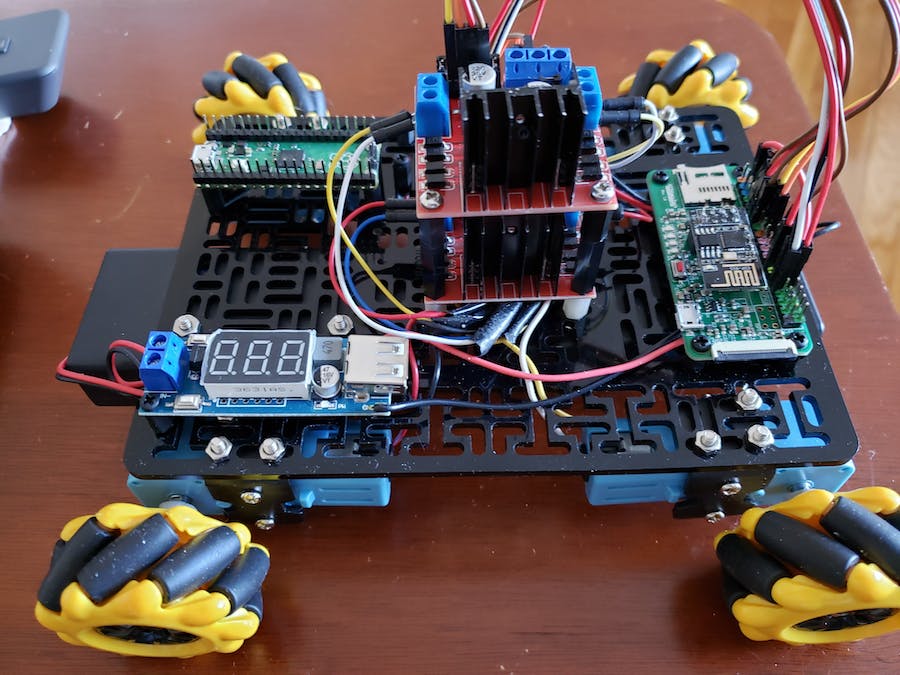 What Do I Build Next? I don't normal start with the finished video...but

... I will also be posting alot of product "url's" and screen shots with content from other noteworthy websites within the body of this writeup.

but I've been busy ordering from AMAZON and ADAFRUIT Industries...thankyou UPS, USPS, FEDEX, and DHL for prompt delivery (less weather delays) and NO LOST PACKAGES!!!!!

and NOW, two/three Mecanum Robots based upon the newly released Raspberry Pi Pico RP2040, ATMegaZero, and ATMegaZero-ESP32-S2 micro computers. The ATMegaZero intrigued me because of its 40 pin GPIO Raspberry Pi type header.

From Adafruit's product description: " At the time of launch, there is no Arduino core support for this board. There is great C/C++ support, an official MicroPython port, and a CircuitPython port! "

What was I getting myself into...I haven't worked with Micro or Circuit Python too much. I naturally, ordered three boards and some accessories. Well I was going to learn to code for either the L9110S (without pwm control) or L298N (for pwm control) motor controllers and again the PCA9685 PWM controller.

I had envisioned this Mecanum wheeled platform (built on an unused Pololu extension platform " Pololu RP5/Rover 5 Expansion Plate RRC07B (Wide) Solid Black " ) to be easily coded and converted between the Raspberry Pi PICO RP2040 based and the ATMEGAZERO micro controllers, even possibly using a 16 channel PWM PCA9685 controller via I2C " Amazon.com: Onyehn 16 Channel PWM Servo Motor Driver PCA9685 IIC Module 12-Bit for Arduino Robot or Raspberry pi(Pack of 3pcs): Home Improvement " and possibly those DC Motor speed encoders " https://www.amazon.com/gp/product/B07TTMSDMR/ref=ppx_yo_dt_b_asin_title_o02_s02?ie=UTF8&psc=1 " or " https://www.amazon.com/gp/product/B081W4KMHC/ref=ppx_yo_dt_b_asin_title_o02_s05?ie=UTF8&psc=1 " (that I could never get working in a finished build)

During my Raspberry Pi PICO research on facebook and youtube, I saw an advertisement for the newly discounted ATMEGAZERO from "espinallabs.com" " ATMegaZero Online Store " (less 15%) and from their website "

Works out of the box with the Arduino IDE (Win/OSX/Linux)" I thought to myself, where did I hear that before.

Naturally, for the ATMEGAZERO I purchased all hardware/accessories available from site to learn from. This is a new form factor to me and I had no clue as to compatibility with what I had on hand. So I purchased three.

I would be faced with alot of challenges and changes with parts selection, layout, interconnection and programming. I even utilized "Thonny IDE" environment on my Windows 10 laptop to program in micropython for Micropython/Circuitpython based ATMegaZero-ESP32-S2 and the Raspberry Pi RP2040 boards. (maybe I'll try to program using that Raspberry Pi 400 that I bought that has Thonny on it).

I had also envisioned utilizing code examples from previous project builds (Osoyoo L298N to Arduino or Raspberry Pi) for WIFI/web access and motor control that utilized the ESP8266 and L298N/L9110S modules for Arduino, Raspberry Pi and Circuitpython robots that I had built. Why should I reinvent the wheel, when I can expand upon code that I already debugged in my environment(s).

Enough with research and reasons... let's get on with the build.

As I positioned, drilled and assembled I added and removed components to address mounting issues with screws and standoffs. I even added the second L298N Motor controller instead of the two L9110S Motor Controllers that I originally wanted to use. This would allow independent motor control for the Mecanum wheels so side to side motion could be achieved.

Also during testing and coding, I had difficulties getting PWM to work correctly; not enough PWM pins on the ATMegaZero available (this build required 4 PWM signals-two for each L298N for speed control for each motor) I also needed to swap pins to free up the 8 digital GPIO and 4 PWM signals required.

I even tried the 16 channel PWM module that used I2C communications because I had a previous project that used the servo ports to connect and drive each of the signals on the L9110S but then during that testing I had alot of motor studder/chatter as well as the failed L9110S module.

The Raspberry Pi PICO was a little or should I say, alot easier to wire up with its straight forward pinouts.

The aha moment !!!! was when I discovered that during an assembly revision, that I had forgotten to re-install the ground wires to both L298N modules "hidden beneath the I2C 16 channel PWM module. Once connected the ATMegaZero code and RPi PICO code began to work as expected and the motors turned.

I'll need to revisit the I2C connections, speed encoders, possibly HCSR04 Ultrasonic sensors for obstacle avoidance and other control software at another time. Maybe even some environmental or positional sensors or even video?

Still to be coded, is the ESP8266 Wifi web control interface for Arduino IDE as well as with Micropython so that I can control remotely.

I'll need to revisit the I2C connections, speed encoders, possibly HCSR04 Ultrasonic sensors for obstacle avoidance and other control software at another time. Maybe even some environmental or positional sensors or even video.

*****Note as of March 7, 2021 ...It hasn't been 24 hours and I need to make a code and wiring revision due to coding for usage of the ESP8266 ESP01S module and the four pins it uses to communicate with the ATMegaZero. Below is the excerpt from the ATMegaZero website:

Things to keep in mind

The two pins on the Atmega32U4 side are allways pulled up to 3.3V, the end user needs to take a note when using these two pins. The RST and CH_PD pins have 2 jumpers on the bottom side of the board, the jumpers are connected to GND, and if shorted out the pins will always be tied to GND.

My original code and wiring examples work if future WIFI connections are not required.

I also discovered that upon power-up, My Front Right motor on pin D13 PIN 29 "BIB IN4 on the top L298N " would spin clock-wise for 3 pulses; until the code initialized. 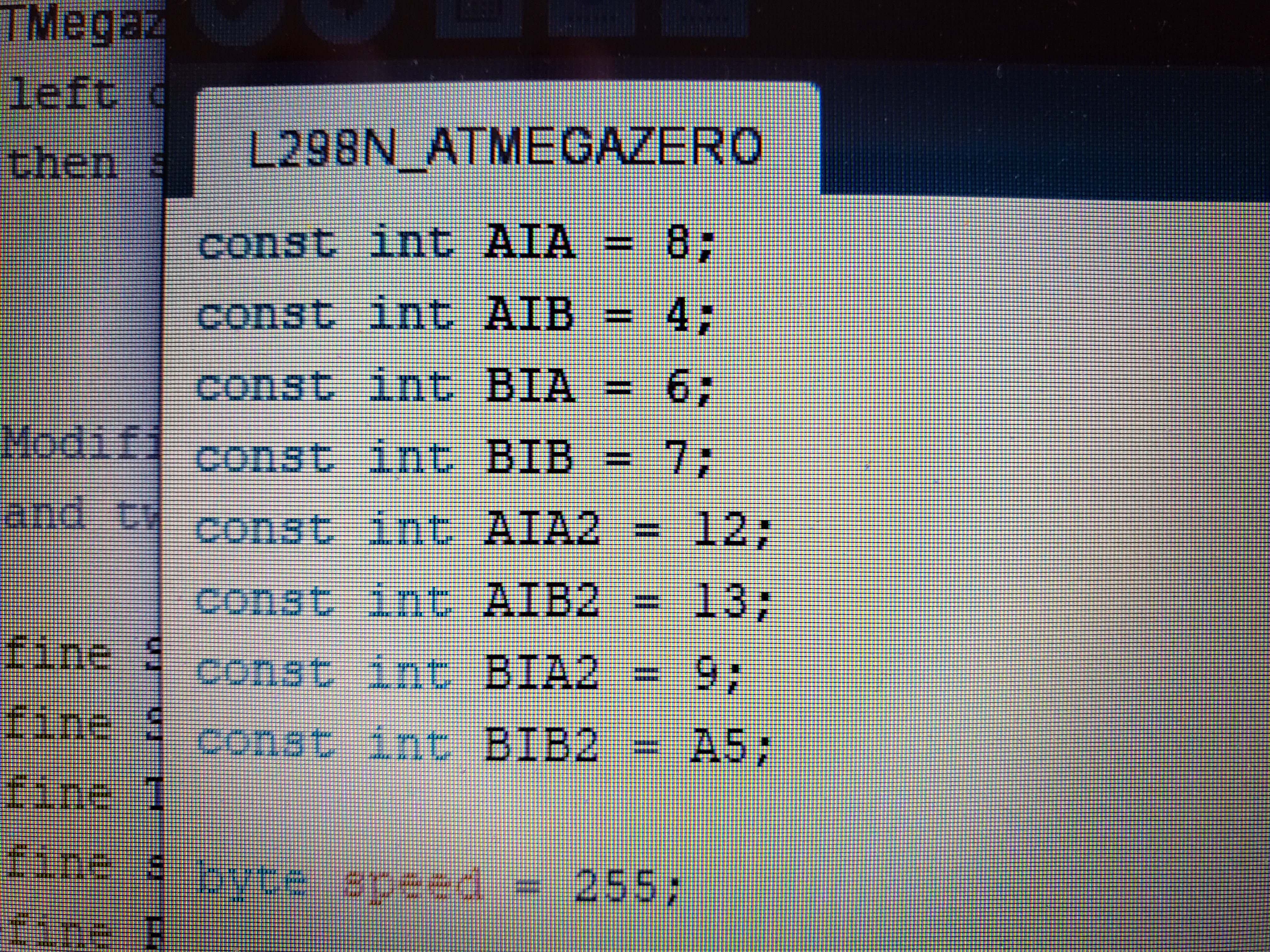 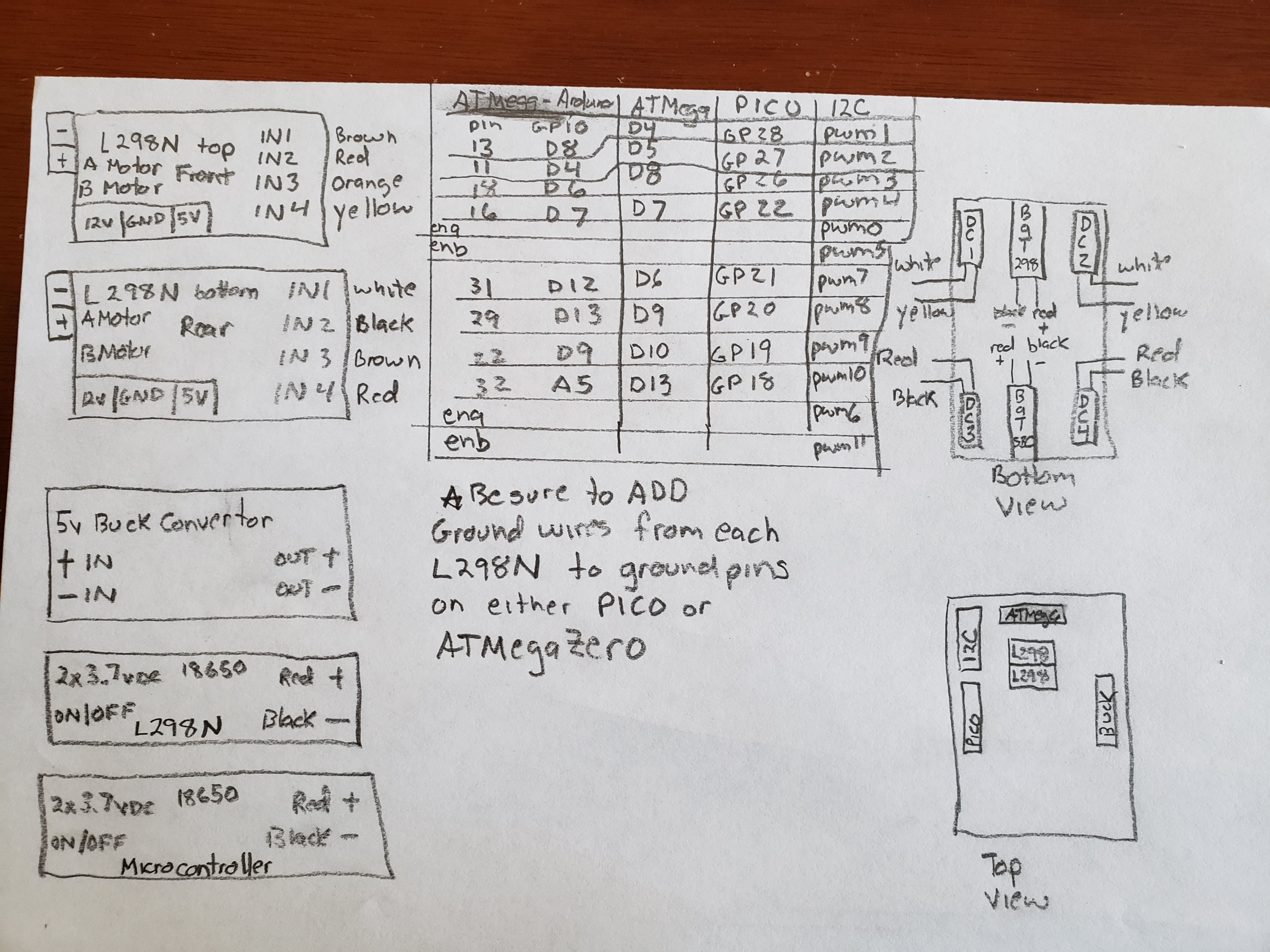 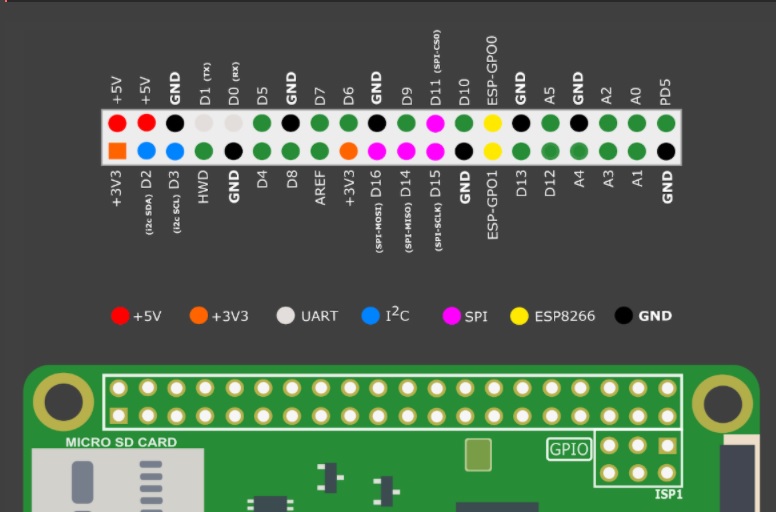 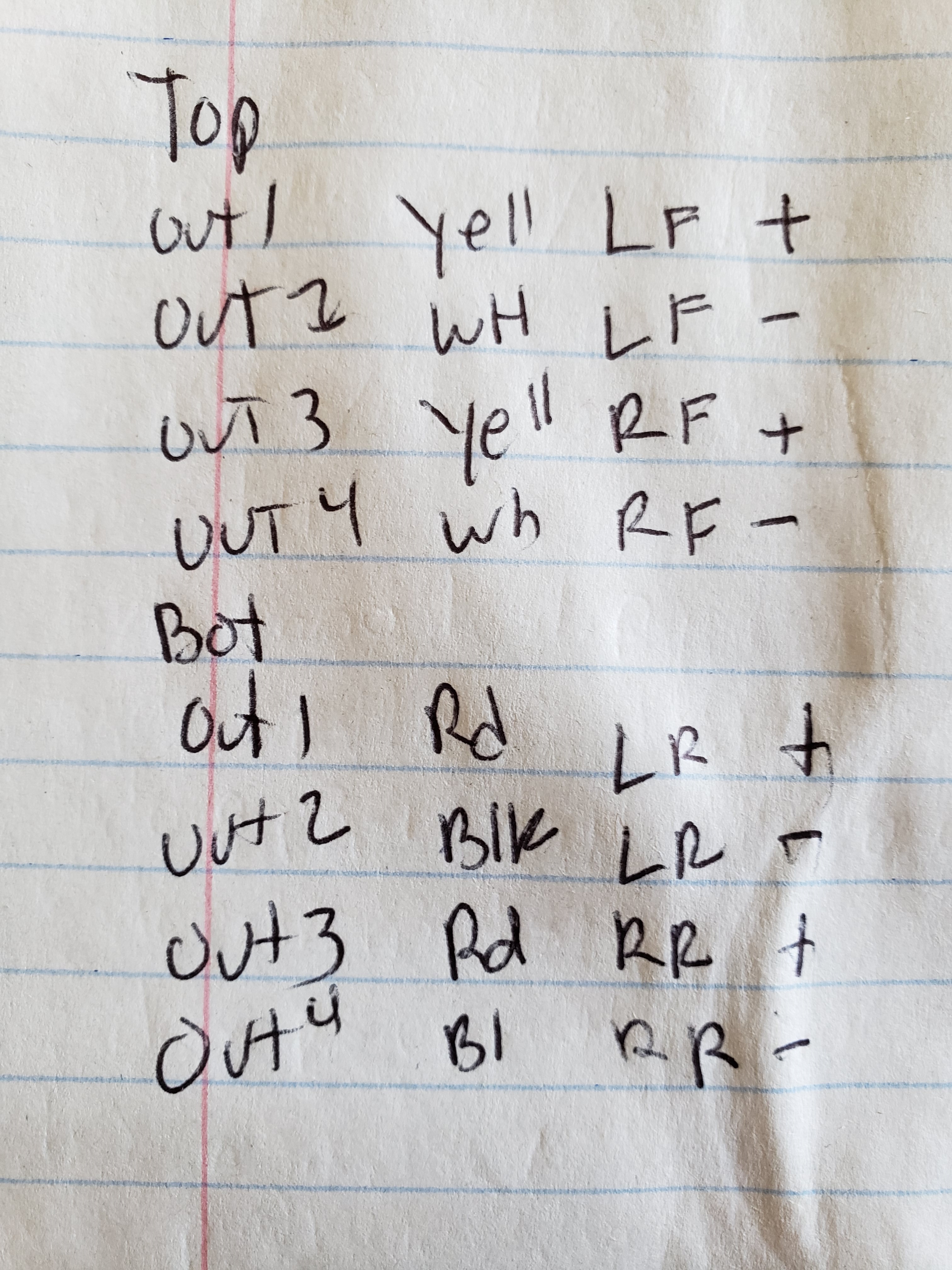 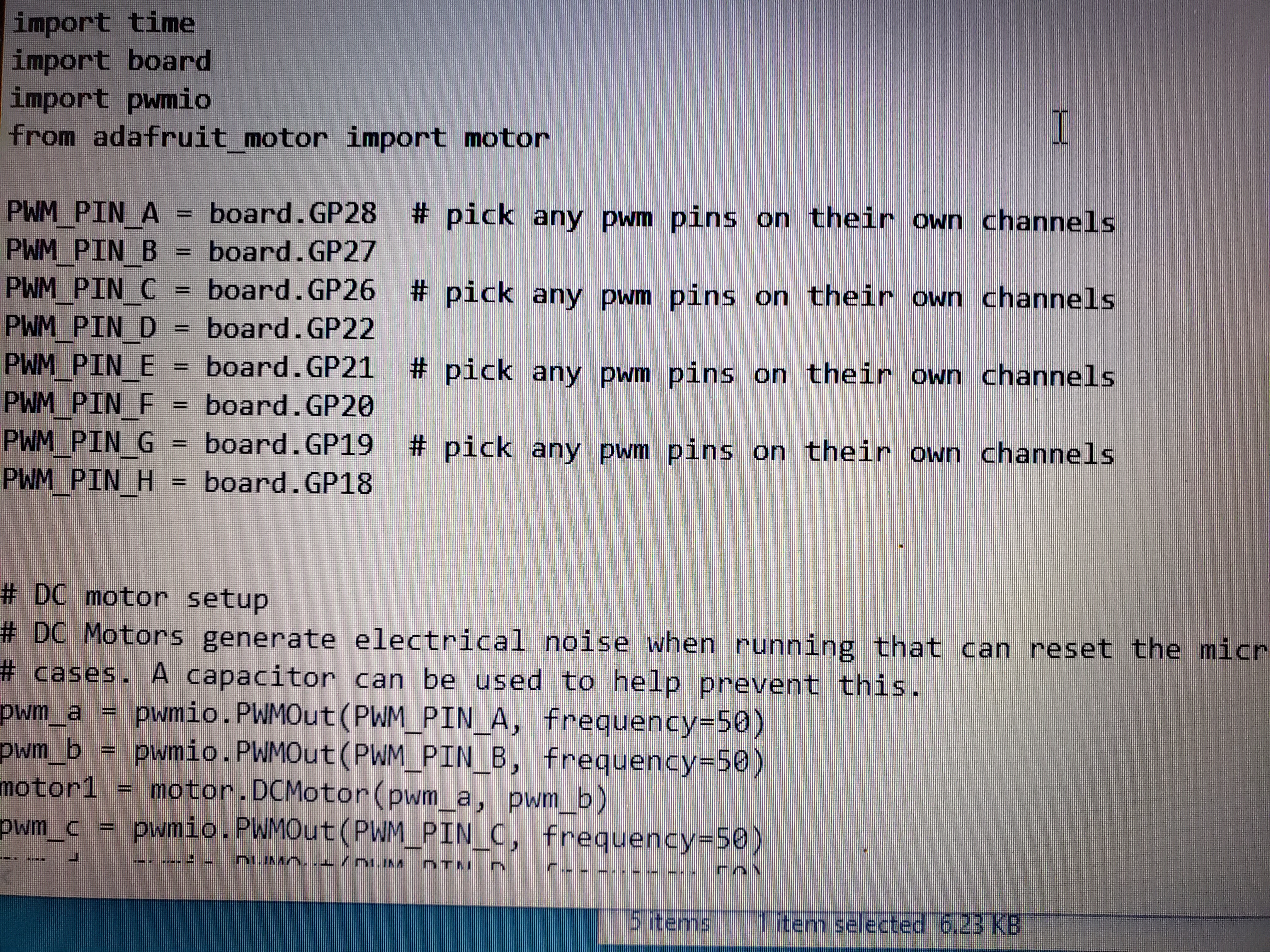 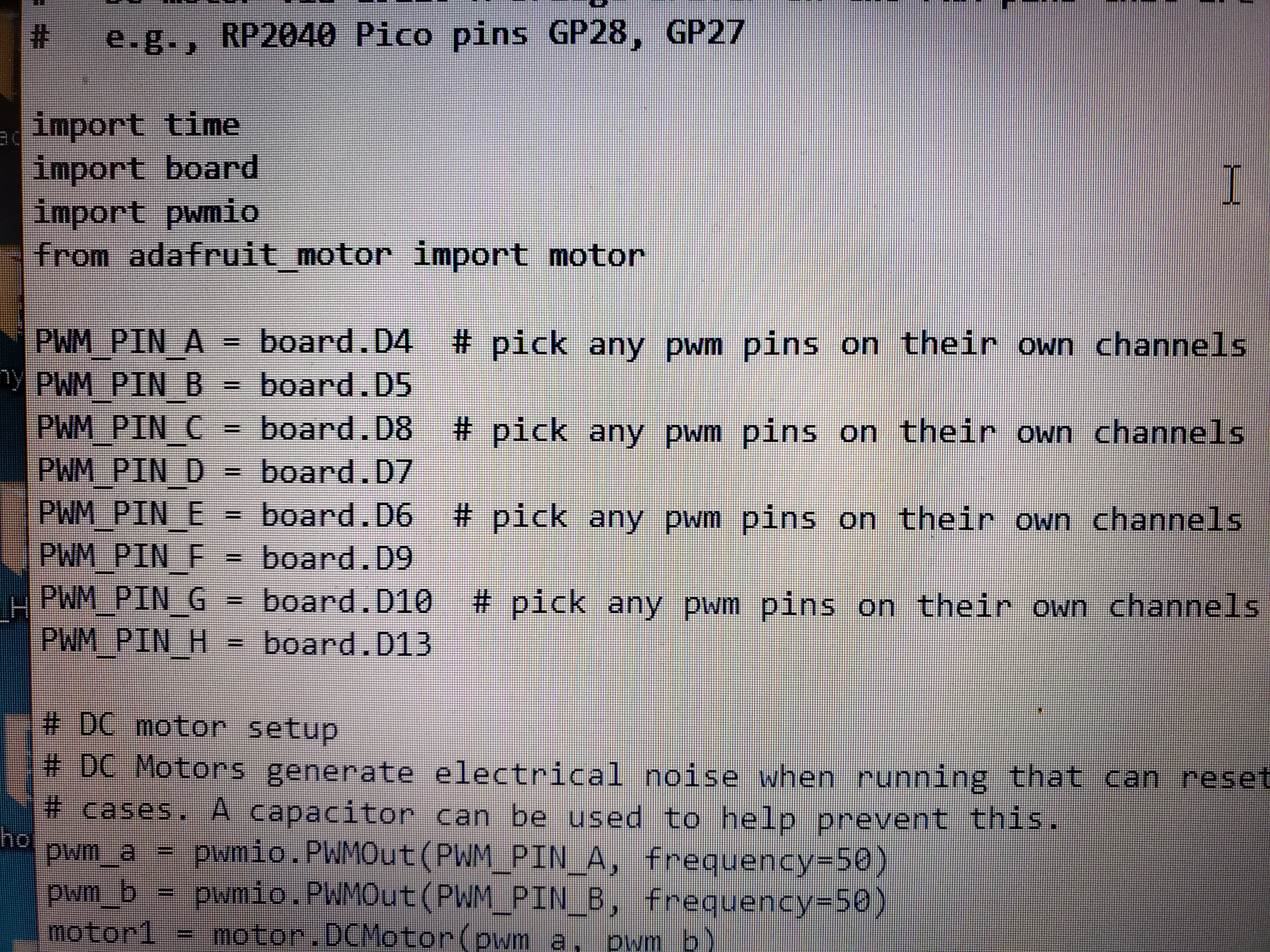