Make your EV3 Brick and EV3RSTORM's legs react to music played from your Echo device.

Make your EV3 Brick and EV3RSTORM's legs react to music played from your Echo device. 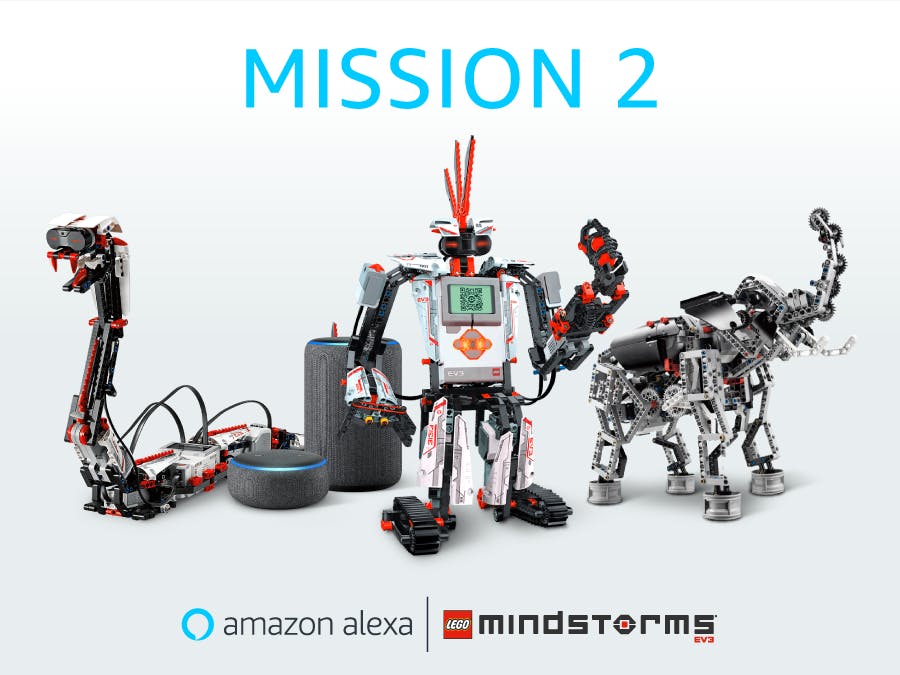 Welcome to the world of LEGO MINDSTORMS EV3 and voice with Alexa! These instructions are part of a series created to show you how to connect your EV3 Brick to Alexa, and build custom voice-based interactions that incorporate EV3 motors and sensors. With this knowledge, you can build and submit your own creation to the LEGO MINDSTORMS Voice Challenge – Powered by Alexa. Don’t be shy bringing in other LEGO elements — let your imagination run wild!

Here is what is included in this series:

Throughout these missions, several resources will be referenced along the way. These references will come in handy as you learn more about the different ways you can create your own LEGO MINDSTORMS EV3 creation that works with Alexa:

At this point, you should have completed the Setup Guide, and Mission 1, where you connected your EV3 Brick to your Echo device in order to get it to react when you say the Alexa wake word. You're on a roll!

For this mission, you will explore another capability that can be added to your gadget: reacting to music. You will:

In the end, EV3RSTORM’s legs should react like this:

The code for this mission can be found in the /alexa-gadgets-mindstorms/mission-02 folder in your VS Code workspace. Let’s get building!

In order to get EV3RSTORM to dance, you will need to have followed the EV3RSTORM build instructions up to page 51. This will at least get you to the point of EV3RSTORM’s legs being built, and the ability for him to dance. The build should look like this:

Using the same VS Code workspace from Mission 1, open the /alexa-gadgets-mindstorms/mission-02 folder. You should see a familiar series of files: an INI file, and Python file. This will be a common pattern for all the missions you will be working through.

As with Mission 1, the first thing you need to do to get your EV3 Brick to react to music, is to add your Amazon ID and Alexa Gadget Secret, and declare a new capability that gives your EV3 code access to the tempo of the music that is being played from the connected Echo device. Within the /alexa-gadgets-mindstorms/mission-02 folder, open the mission-02.ini file, which should look like:

With those changes, your EV3 Brick will be able to connect to your Echo device as an Alexa Gadget, and you’ll see a different capability has been specified. With the tempo capability within MusicData specified, you will now be able to access the tempo data you need to get your EV3RSTORM build to dance.

There are more capabilities you can explore in the documentation.

Getting the music tempo data

Within the mission-02 folder, open the mission-02.py file. To get EV3RSTORM to dance, you first need to obtain the tempo of the music playing from the connected Echo device. To do this, you can override the on_alexa_gadget_musicdata_tempo callback method. Adding this method to the MindstormsGadget class gives us access to the tempo directive. With the tempo directive, we can get the average beat per minute of a song currently playing. Here is how we obtain this data:

Dancing to the music

Before EV3RSTORM can dance, you will need to initialize the motors that control the legs. Based on the building instructions, you should have large motors connected to the following ports:

To control the motors, you can use ev3dev2.motor API within ev3dev. From that module, you need to import the port names and the LargeMotor class. Then, you can initialize the left and right motors using the LargeMotor class and its corresponding port name. The following code within the MindstormsGadget class perform motors initialization:

With the music tempo data and the motor controls set up, you can orchestrate the robot movement to perform a dance. There are many ways to do this, feel free to implement your favorite dance moves. In this example, there are two parts to the dance move, the initial pose and a dance loop. When a new song is started, the robot will strike a pose.

After that, it will go into a dance loop until the song ends. The movement speed in the loop will be based on the music tempo:

After reviewing the code, you can run it and see how your EV3 Brick reacts. As noted above, the code you run will make EV3RSTORM strike a pose and start dancing based on the tempo of the music played from the Echo device that your EV3 Brick is connected to.

To see this in action, follow similar steps from Mission 1:

2. Copy the missions folder in your computer workspace to your EV3 Brick. Click on the Send workspace to device button next to the EV3DEV DEVICE BROWSER text that shows up when you hover over the text.

When you click this button, you will see the status of the files being copied in the bottom-right of VS Code, and will update the /alexa-gadgets-mindstorms/mission-02 folder on your EV3 Brick with the code you modified.

4. Once the program starts, you should see a prompt in the debug console when your EV3 Brick connects to your Echo device.

You will also see a message on the screen of your EV3 Brick.

Now comes the fun part! Try the following to see how your EV3 Brick reacts:

When music starts playing, EV3RSTORM’s legs should strike a pose, and then start dancing along to the music.

Try changing the song to see how the changing tempo data affects how EV3RSTORM dances.

When the music stops, so should EV3RSTORM.

You should also see messages printed to the debug console that look like this:

You did it! EV3RSTORM has learned some new dance moves. You can always stop the program by clicking the Stop button at the top of the screen in Debug mode, or pressing the back button on your EV3 Brick.

Other things to explore

For this mission, try making EV3RSTORM dance differently based on different tempo data, change the dance moves, or use LEDs and Sound too. Reacting to tempo data is one of the things that you can do with your creation by leveraging the Alexa Gadgets Toolkit.

You can also do things like react to notifications, timers, wakeword, and more. Learn more by reviewing the documentation, or by referencing the INI and Python file within the Alexa Gadgets Kitchen Sink example for Raspberry Pi.

You can also explore other capabilities of ev3dev by referring to the documentation.

What to do next

In Mission 3, you’ll create an Alexa Skill that allows you to control EV3RSTORM's motors with your voice!