DIY Helium Light Hotspot replicating a real miner using the Dragino gateway or other. You might be able to mine Helium coins with this setup

DIY Helium Light Hotspot replicating a real miner using the Dragino gateway or other. You might be able to mine Helium coins with this setup 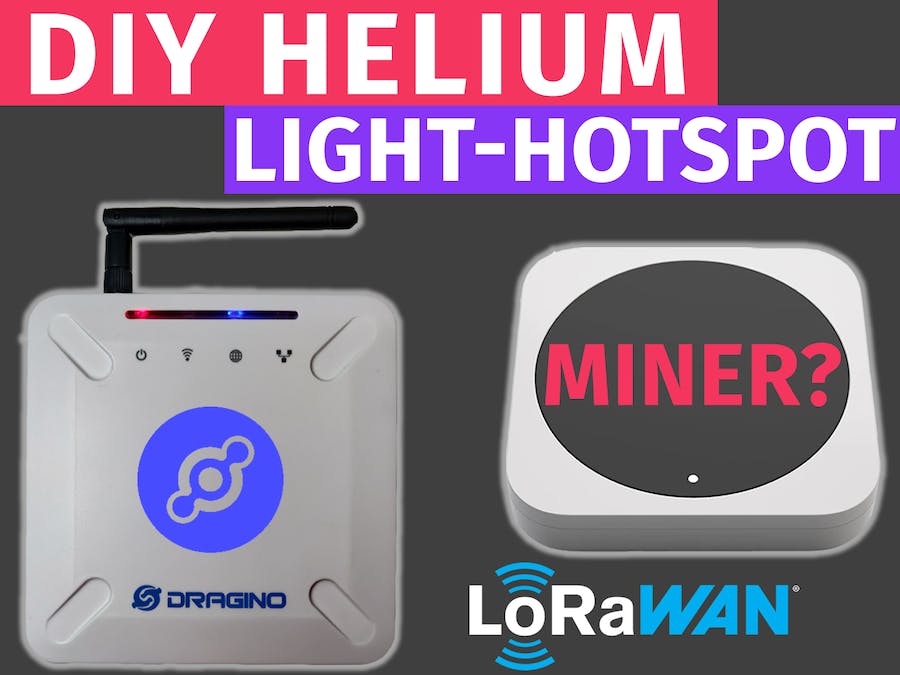 Today we have with us one of our old friends, The Dragino LPS8 Gateway. You can check the previous article on LPS8 Gateway from here and a video based on it from here. As we said in the introduction article of the LPS8 Gateway, we will be making some fun projects. So here we are back with the LPS8 8 Channel Gateway from Dragino and we are going to connect it with the Helium Network and after connecting it we will configure it to become a Light Hotspot. We also have a LoRaWAN Node with us which will be acting as a beacon and transmitting some messages continuously. When the whole thing is done, we will be able to see any message from our beacon on the Helium Console through the Gateway, which will act as a real miner but will not be able to mine Helium tokens on the Proof of Coverage Concept as such. Though in nearby future, Helium is planning to incentivize the data transfer as a Packet Forwarder which we are making here, and if everything goes by plan then you will be able to earn helium tokens based on data credits you spent or the number of beacons, etc, but this whole thing is under beta testing right now and nothing is finalized yet.

Now let's get to the fun part.

PCBONLINE has been specialized in advanced printed circuit board manufacturing and assembly since 1999. They achieve industry 4.0 manufacturing for aluminum PCBs so that the cost is much lower than other manufacturers. Any levels of manufacturing happen on the same production lines. The strong manufacturing capability meets any demands of PCB and PCBA orders. All users that register from their website get $100 coupons for online purchases. For bulk orders, they offer discounts, free complete PCBA samples, and free PCBA functional testings. For all PCB and PCBA customers, free design for excellence and one-to-one technical support is offered.

Launched in July 2019, Helium is a distributed network of long-range wireless hotspots. The goal is to create a blockchain-powered network for the Internet of Things (IoT) devices creating what they call “The People’s Network”. Helium is a global, distributed network of Hotspots that creates public, long-range wireless coverage for LoRaWAN-enabled IoT devices. Hotspots produce and are compensated in HNT, the native cryptocurrency of the Helium blockchain. The Helium Blockchain is a new, open-source, public blockchain created entirely to incentivize the creation of physical, decentralized wireless networks. Today, the Helium blockchain, and its tens of thousands of Hotspots, provide access to the largest LoRaWAN network in the world.

The Helium Network is a physical wireless network that succeeds based on the amount of reliable coverage it can create for users deploying connected devices on it. As such, it required a working algorithm that was built for this use case. Proof-of-Coverage takes advantage of the unique, undeniable properties of radio frequency (RF) to produce proofs that are meaningful to the Helium Network and its participants. Specifically, PoC relies on the following characteristics:

The blockchain is constantly interrogating Hotspots using a mechanism known as a “PoC Challenge” using these properties. The ultimate power of Proof-of-Coverage lies in the fact that the data generated by the ongoing proofs and stored in the Helium blockchain is definitive verification of the wireless coverage provided by Hotspots on the Network.

What Is a Light Hotspot?

Light Hotspots are the evolution of how LoRaWAN gateways will interact with the Helium blockchain. Since the genesis block, the Helium blockchain has run entirely on the physical Hotspot itself. As the blockchain network grows, each Hotspot running a full node undergoes increasing load and is starting to fall out of sync due to the higher compute requirements.

To mitigate this, the Hotspot's consensus work will be moved off of physical Hotspots and onto Validators. This will simplify the architecture immensely, and enable us to grow the Network exponentially while keeping block times and epochs stable.

As all approved Hotspots transition to a Light Hotspot architecture, we also introduce a new type of Hotspot known as Data Only Hotspots to satisfy the increasing demand and continue to expand network coverage. When Light Hotspots are fully developed and in production (which will happen with the completion of Milestone 4 detailed below) they will satisfy the following properties:

You can read about this in detail from here.

The LPS8 is an open-source Indoor LoRaWAN Gateway. Unlike the LG01-P single channel gateway. The LPS8 is an 8 channel gateway which means that we can connect more nodes to it and can easily handle comparatively larger LoRa traffic. The LPS8 Gateway is powered by one SX1308 LoRa concentrator and two 1257 LoRa Transceivers. It has a USB host port and a USB type C power input. Apart from that it also has an ethernet port which can be used for connection purposes. But we are not going to use that today as we are going to connect it using Wi-Fi. We have 4 status LEDs for the Power supply, Wifi Access Point, Ethernet port, and Internet connectivity on the front part of the Gateway.

This Gateway lets us bridge LoRa wireless network to an IP network via Wi-Fi or Ethernet. The LPS8 uses a Semtech Packet forwarder and is fully compatible with the LoRaWAN protocol. The LoRa concentrator in this Gateway provides 10 programmable parallel demodulation paths. It comes with pre-configured standard LoRaWAN frequency bands to be used in different countries. Some features of the LPS8 LoRaWAN Gateway are:

Though I have also added a file on my Github for the Gateway-rs software still I suggest you to install it directly from the helium repository as from there you will get the latest release for the software. You can access the helium repository from here and download the gateway-rs software and in this way, we are done with the prerequisites and we are ready to move to the configuration part.

Now we are done with the pre-requisites so we can move on to the configuration part of the project. Firstly, we need to connect our Gateway to our Laptop using an Ethernet Cable and a USB type C cable to power the Gateway. Also, we need to keep the LoRa Antenna connected at all times. We can now move on to our laptop and follow the steps given below as the remaining part is to be done on that only:-

And with this comes the end of the configuration step of the Light Hotspot. Now our hotspot is ready for testing.

As our Gateway is now configured to work as a Light Hotspot. We need to test if it is working fine or not, For that, we need to open the staging console from here. Once you have set up a device with a staging console, you need to copy things like Device EUI, App EUI, App Key, etc and configure the LoRaWAN node. The LoRaWAN node configuration process will be covered in another project but right now we have a pre-configured beacon. We will connect the beacon and it will start sending LoRaWAN messages. If everything is working fine then the Gateway will capture the LoRaWAN messages and forward them to the helium console. If you check the console by scrolling down a bit you will see a creative visualization of live data packets transfer on the console.

If you open the debug console you will see there commands such as Join request which is sent by the LoRaWAN node and as soon as the Join request is accepted, the data transfer starts. This sequence will go on and the LoRWAN node will keep sending data packets that will be received by the Console through Gateway. If you hover over any of the data packets that are shown in the visualization you will see a small message such as "33 kB packet received by merry-yellow-leopard". If you remember, "merry-yellow-leopard" was the name assigned to my Gateway by the Helium Network. This also shows that everything is working fine and now as you have tested your setup, you can move onto the original Helium Console and deploy it there.

So this was the configuration of the Gateway as a Light Hotspot. You can also get these Gateways and try this by yourself. That's it for this project. See you later with another fun project.