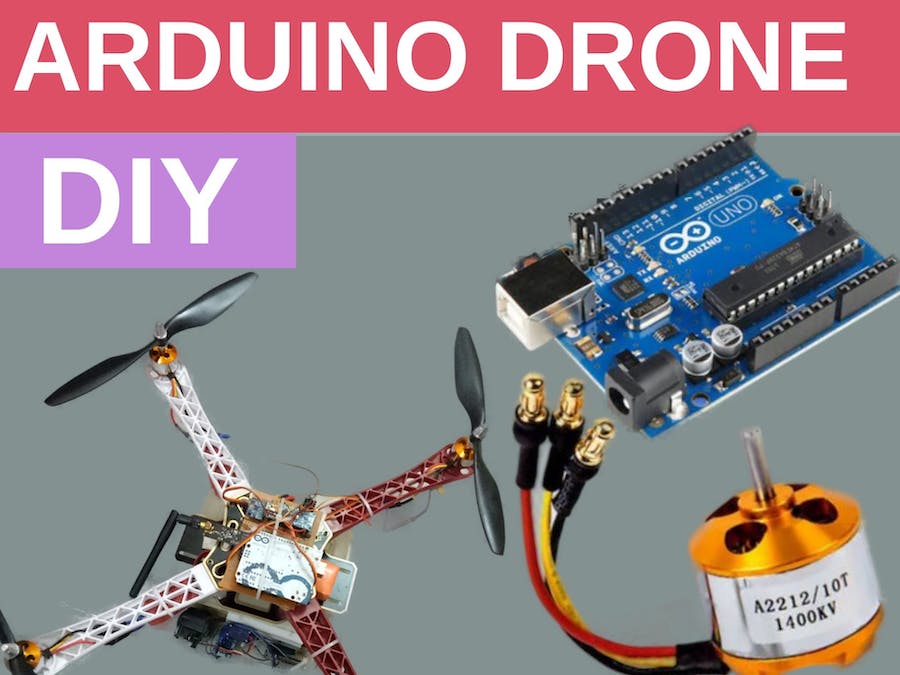 This is the third and final part of our Arduino-based Drone Series. In the first part, we made a ​flight controller for our drone using the Arduino Nano and MPU6050 module. In the second part, we made an ​Arduino-based Remote Controller Pair to control our drone. Now in this final part of our drone series, we are going to assemble the frame of our drone, load it with motors and ESC's and after that, we will complete the circuitry part as well by connecting the Flight Controller and Radio Receiver that we created. The frame that we are going to use here is the DJI F450 Quadcopter frame. Apart from that, we will use BLDC motors with a kV rating of 1400 and some propellers. One thing to keep in mind is that we use two different types of propellers whenever we use them with our Quadcopter. Two propellers are of one type and two propellers are of different types. We will discuss that in detail ahead in the article.

So let's not waste time and get to the fun part!

You must check out PCBWAY for ordering PCBs online for cheap!

You get 10 good-quality PCBs manufactured and shipped to your doorstep for cheap. You will also get a discount on shipping on your first order. Upload your Gerber files onto PCBWAY to get them manufactured with good quality and quick turnaround time. Check out their online Gerber viewer function. PCBWAY takes care of its customers a lot that's why they offer reward points with every purchase that you make from them these reward points can be redeemed for various useful items from their gift shop.

Before moving on to the Assembly part, you first need to know the components that we are going to use to better understand what you are doing. So, let's discuss the components one by one:-

Assembling the Frame of the Drone

In this step, the assembly of the drone's frame will be done. Along with the frame, motor placement and their connection with ESC will be completed. So you need to follow the instructions given below to get the frame ready:-

With this the frame assembly is complete. Now in the next step, you need to calibrate the ESCs and adjust the directions of the motor rotation as well. How to do that will be discussed in the next step.

In this step, you need to calibrate the ESCs. By calibrating here we mean to say that we are going to inform our ESC of the max and min limit between which it is going to be operated. The Calibration of ESCs is necessary to prevent some problems such as motors not starting together or the speed of some motors not being as it should have been. These kinds of problems can be prevented by calibrating the ESCs. It is a very simple process and for this process, we need some jumper wires, an Arduino UNO, and the drone frame assembly that we made in the last step. You need to follow the steps given below to calibrate your ESC:-

Once this is done, you can remove the Arduino UNO that you used to calibrate the ESCs and move on to the next step which is connecting and Placing the Flight Controller and Radio Receiver on the Drone.

Connecting the Flight Controller and Radio Receiver to the Drone

Till now we have assembled the Drone Frame and calibrated the ESCs for our Drone. Now in this step, we are going to place the Flight Controller and Radio Receiver that we made onto the drone and will do the final connections to complete the setup of our Drone.

And this will complete all the connections of the drone assembly and we can say that our drone is ready ​to be flown. In the next step, you will get to know how to start the drone and how to fly it.

Till this step, we were taking care of the drone assembly the connections, and all the complex stuff. Now in this step, we need to give our drone the finishing touches and try to fly it. So now, what you need to do is to take the propellers and attach them to the motors. There need to be two propellers of one type and two propellers of the other type and similar types of propellers should be attached to diagonally opposite motors. The propellers should be properly tightened as the motors rotate very fast and there remain chances of propellers flying off that may cause damage. After the propellers are attached, you need to turn On the power supply to the ESCs. this will turn on the drone but you will see that the motors are not running. This is because we need to arm our drone before flying it. Arming means to start the drone, when the drone is armed, the motors start to rotate but at a slower speed. To arm the drone, first of all, we need to power up the Transmitter and make sure that the drone is placed in a big and open space because as the Transmitter is self-made, it may take some time for you to understand how to control It properly so to avoid any kind of damage, make sure that the drone is at an open and empty space. Now to arm the drone, you need to hold the left side joystick and take it to the bottom left position and hold it there for one or two seconds. Make sure that you take it to the exact correct position otherwise the drone will not arm. Once the drone motors start running, slowly increase the throttle i.e. move the left joystick upward this will increase the speed of the drone and the drone will slowly take off. Control the direction of movement and drift of the drone with the help of the right-hand side joystick.

So in this way, we are ready with our own Arduino-based drone. Some points that I want to add based on my personal experience is that always bring 2 extra sets of propellers because these are the components that definitely break whenever someone makes a drone. After that, use a LiPo battery tester. It will make a sound whenever the LiPo battery is near the set Threshold value and will protect the LiPo battery from getting permanently damaged as if the battery is drained below a certain value then it causes irreversible damage to the battery. Make connections carefully and always double-check them with the help of a multimeter for some possible shorting and connect the power supply only after getting sure that there are no connections short in the circuit. I bricked an Arduino Nano due to this mistake, So take care of that. Make the frame as stable and vibration-free as possible because it may cause the drone to disbalance. make sure all the screws and propellers are tight enough to keep the drone stable and damage-free and last but not least, never lose hope there will be definite problems when you try it hands-on but you can overcome them easily with a little bit of focus and a bit of extra effort. I myself faced a lot of problems but in the end, I was able to complete it and fly it as well. With this, I will bring this article to an end. Until next time, enjoy flying.