Particle Photon with DFPlayer along with animatronic drivers for Gemmi Frogz, Furby, Billy Bass, and other creatures.

Particle Photon with DFPlayer along with animatronic drivers for Gemmi Frogz, Furby, Billy Bass, and other creatures. 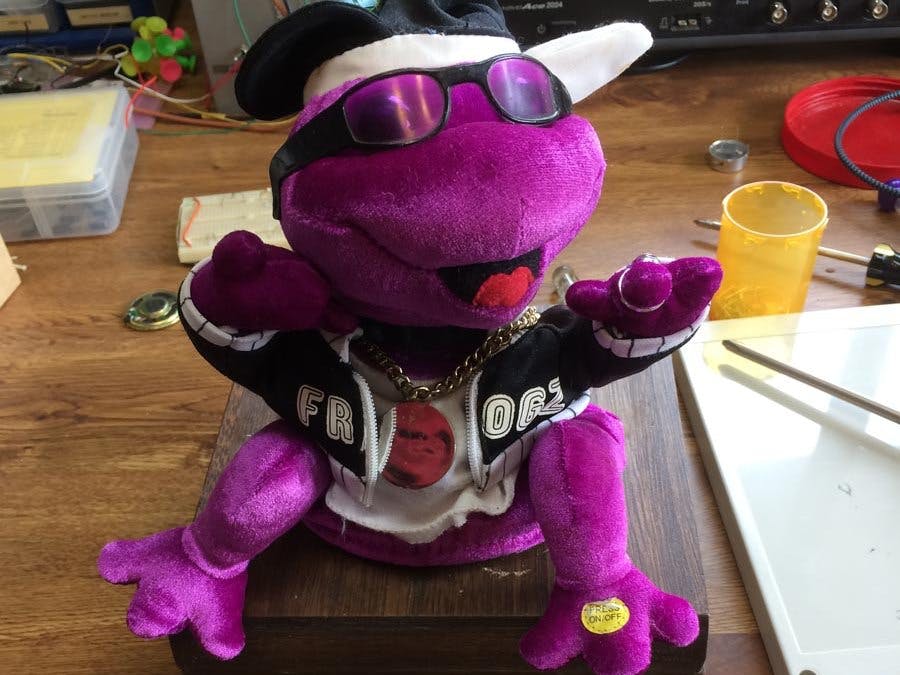 I got inspiration for this project from a variety of sources.

My 3 year old grandson threw his Gemmi Frogz from the second story balcony, destroying its battery case and electronics, so I put this animal on the shelf for a while until the right opportunity came along to re-animate this creature with better music and abilities.

I had already used the Particle Photon in an Alexa controlled Hanukkah menorah, so I was moderately familiar with iOT services, and the invention of the Blynk drag-and-drop user interface made the difficult easy in doing this sort of project.

The "Talking Skull" project in Nuts and Volts was an addition inspiration, and informed me about the DFRobotic DFPlayer but this project had no internet connections.

The Photon Animator Board replaces the PIC with a Particle Photon and uses the DFPlayer library as well as the Blynk library for the Photon IDE as well as some simple application firmware to control the frog.

The board design also could control a Furby, the Billy Bass talking fish, as well as the latest Star Wars Porg.

The DFPlayer uses a microSD card to store MP3 and WAV coded sounds or music. a typical use allows for 99 numbered folders for music or sounds, a folder for "mp3" and a folder for "advertisements". We can put a 32 Gbyte micro SD card into the module which means hours of stored music. the module has a stereo audio output as well as a built in 1 watt monophonic speaker amplified. One Watt is certainly loud enough to entertain and annoy your intended audience, but I also put the foot prints for two versions of carrier boards for the PAM8403 3 watt stereo class D amp. A library of commands are available for the DFPlayer that are sent to it via the auxiliary UART pins on the Photon. When an ADVERT command is sent the file chosen interrupts the current audio program and plays the advertising file after which the current program resumes.

Blynk is a Platform with iOS and Android apps to control Arduino, Raspberry Pi, ESP8266, ESP32, and the Particle Photon and the likes over the Internet.

It's a digital dashboard where you can build a graphic interface for your project by simply dragging and dropping widgets.

Blynk Dashboard for this project

A Blynk Slider is attached to a short program which sends Volume control commands to the DFplayer through virtual pin V2.

A Blynk Step Control is used to select the main audio track , there are 99 steps and each time the step control is actuated the value is sent to the DFPLayer to loop through that folder through virtual pin V4.

A Blynk Button is used to send the ADVERT command through virtual pin V1 when the advert command it sent, it also starts the Frog moving.

There are two motors in the Frog. One moves the arms, and the other moves the head back and forth through a cam. The Arm actuator needs to be operated forwards and reverse, which is why the L9110H is used so the motor can be reversed.

The Blynk timer is set to one second interrupts. When the ADVERT command is set it starts moving the arms up and down for a set period of time. Right now this is set to 15 seconds, but the time could be changed for each advertisement to match its duration.

The PCB for this project is available at PCBway.

Bill of Material for