A wireless ROVER which is controlled by a web-page served by Node.js server, with the help of Sockets.

A wireless ROVER which is controlled by a web-page served by Node.js server, with the help of Sockets. 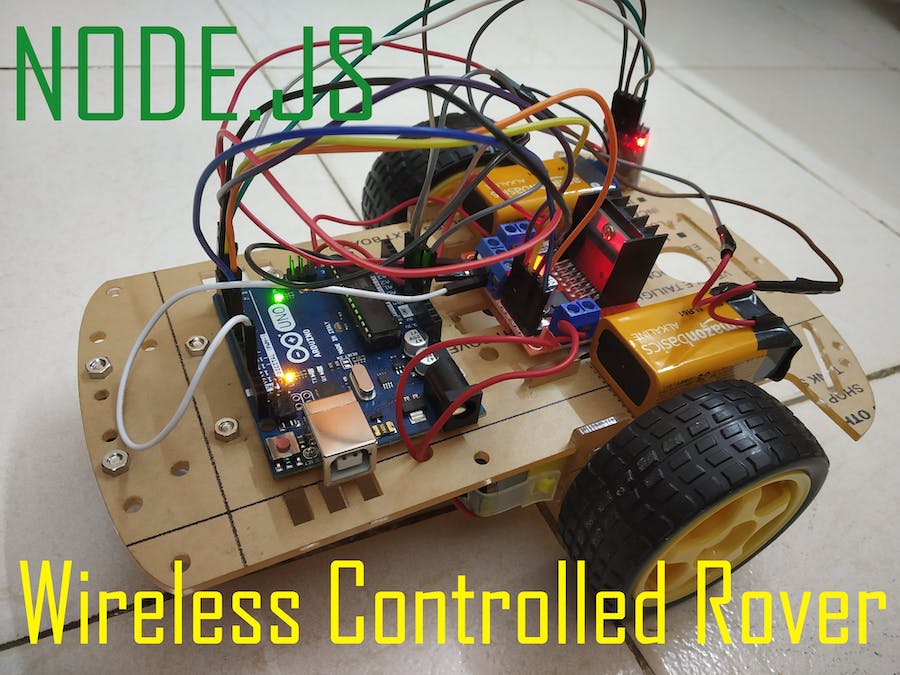 Node.js is one of the best options for Real-Time Applications. I have previously worked on some real-time apps using Sockets, so with the same concept, I decided to make some IoT projects with Node.js server for self-learning.

This Rover of mine communicates with my Node.js server using Bluetooth and on the front-end, I send commands to the server using Sockets.

To study and implement wireless communication between Node server and hardware (which is in this case our Rover), and to remotely control the Rover with a mobile web-page served by Node server using Sockets.

You need to have some basic knowledge of Node, socket programming, and L298 Motor Driver working.

Building the Rover is not that complicated, you can purchase a "2 wheel chassis kit" which is easily available online and comes with all assembling units.

Our Arduino Uno and L298 Motor Driver are embedded on top of our Rover, both of which are powered by two 9 volts battery separately.

Arduino Uno in turn will power the HC-05 Bluetooth module which will communicate with our server.

As shown above the circuit diagram, the L298 motor driver is powered by a 9V Battery, the two motor control outputs are connected to Motor A and Motor B and as the motor has no polarity you can connect any terminal to it, but make sure that both motors rotate in the same direction. Do not remove the 5V regulator jumper.

Note: if you power L298 with more than 12 volts the onboard 5V voltage regulator will be damaged.

Arduino Uno is also powered by a 9V battery with its positive terminal connected to the Vin pin of Arduino and the negative terminal to the common ground. Arduino in-turn will power the Bluetooth module, so connect the Vcc pin of HC-05 to 5V of Arduino and GND to ground.

As shown above, is a diagram showing the transmission of signals.

2. When the user clicks a button on the web-page, it will trigger the server to perform the required function. This communication happens due to Sockets.

5. The Arduino UNO in turn will control the L298 module.

Step 2- Setting up the server

Note - Installation of "node-gyp" might be tricky as it does not support some latest version of Node, so better install version 11.15 of Node.

Now, we need to listen to events from a web page, as soon as an event is triggered while interacting with the web-page, the page will emit the required function which needs to be executed to our Node server. The server in turn will listen to that message and will execute the desired function (which is in our case, send data to Bluetooth).

So, create a server and web-page using packages like "express" and "EJS". Design the web-page with the controls you want and set up socket connections for it by creating a socket server, you can refer to this documentation.

For Bluetooth setup refer to this documentation. Whenever any control-button is clicked a message is sent to the HC-05 module.

Here is my simple web-page --

As Bluetooth will communicate with Arduino-Uno using Serial Communication we will send some "string" as a command and an additional letter which will tell us to terminate and capture the string.

For example-: for moving forward, Bluetooth will transmit "forwardT", and in the Arduino end as soon as we encounter the letter "T" we will know the serial communication is completed.

And with that incoming string command, we will configure the L298 driver to move forward, backward, left, right, alter the speed, etc.

In later stages, I am planning to control the rover using voice commands, and obstacle avoidance feature. I can also maintain a database where I will keep statistics records such as distance traveled, max speed, avg speed, etc. I will also add multiple sensors such as temperature, light, and humidity and will keep track of it at regular intervals which will get stored in our DB. 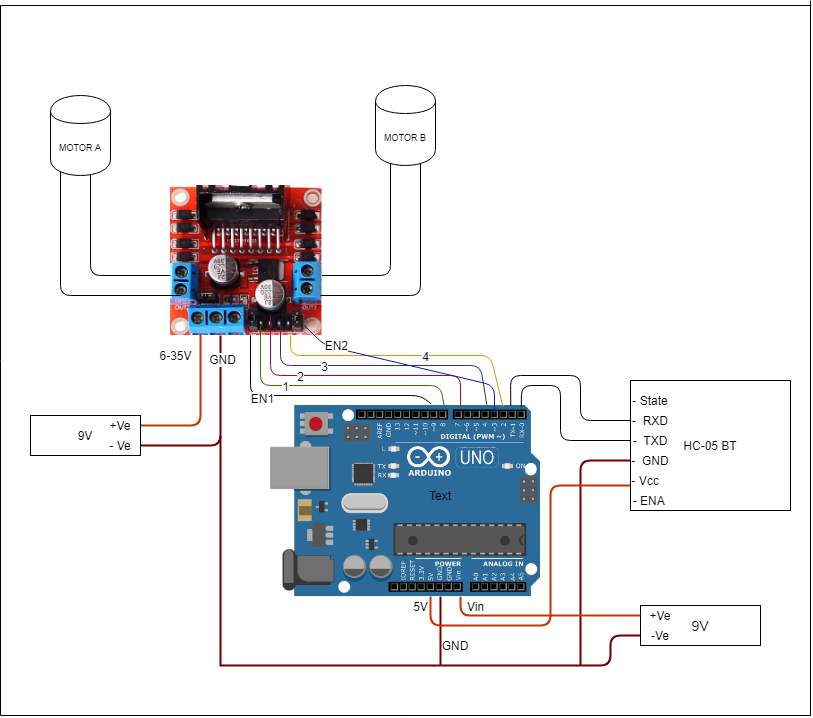 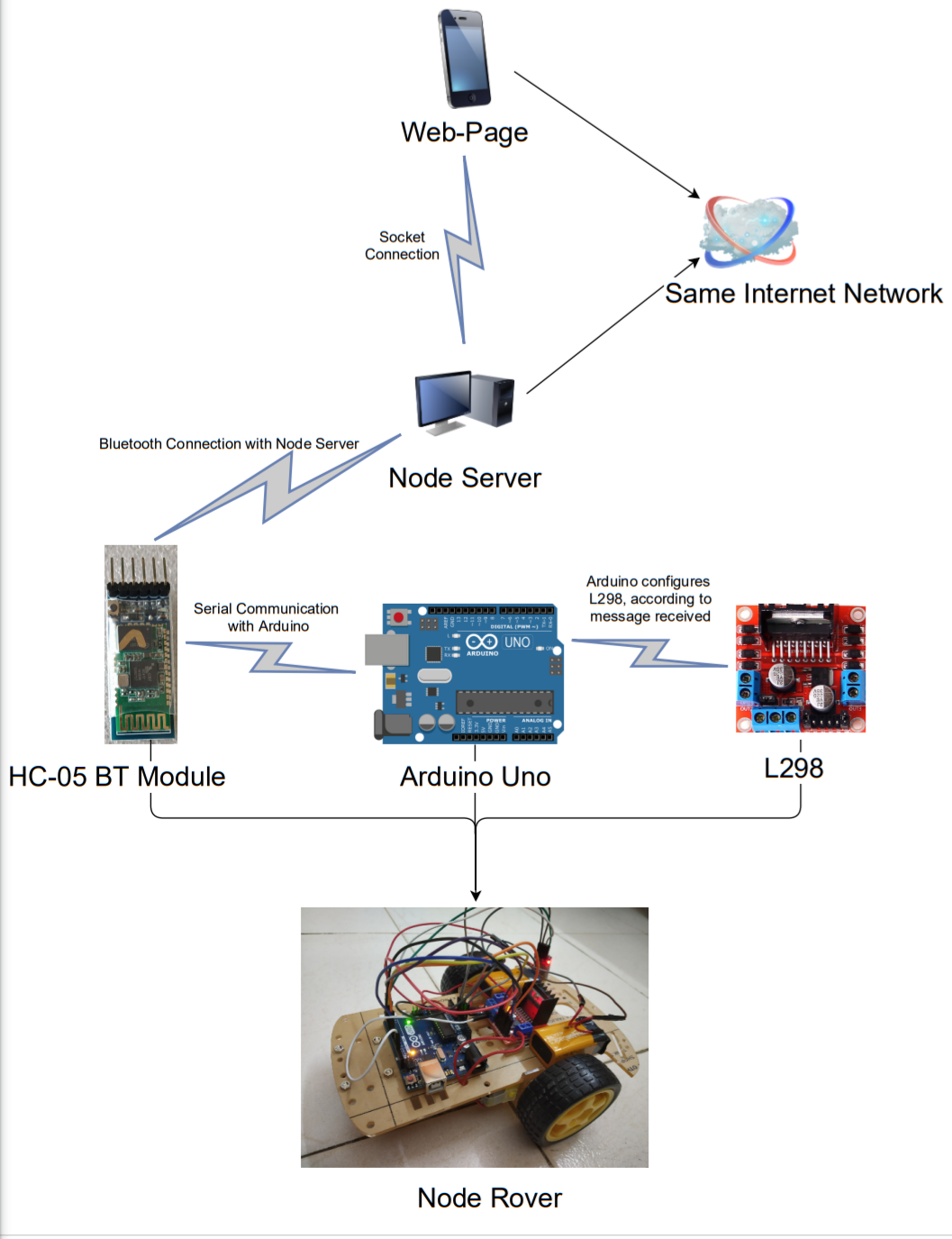