A small spider-robot with web throwing, climbing and swinging abilities (sort of)

A small spider-robot with web throwing, climbing and swinging abilities (sort of) 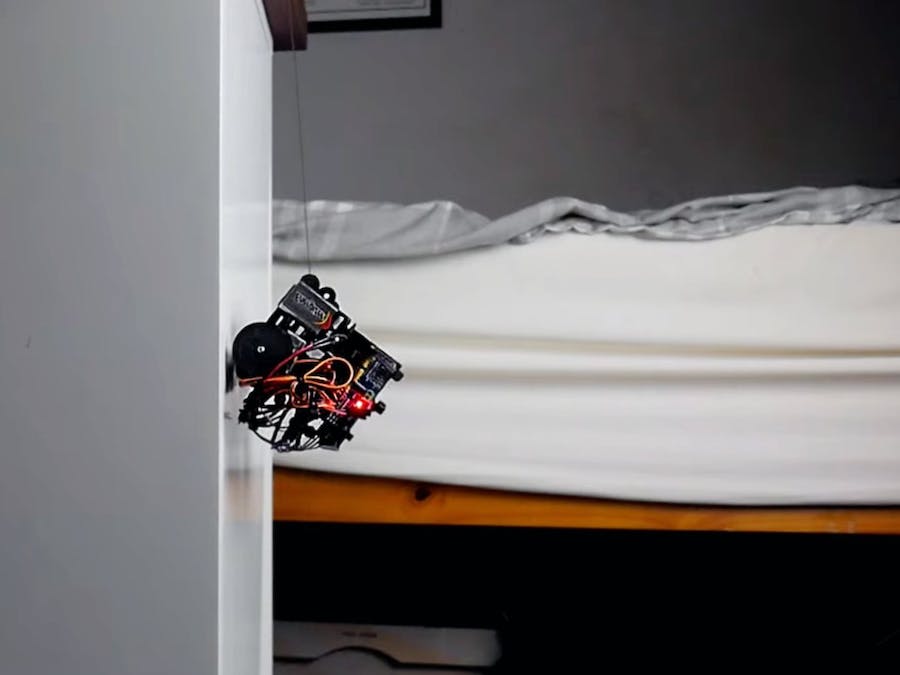 I've been building this project for over a month as a way to get to grips with electronics/robotics/3d printing, and because I thought it might be cool.

I've been documenting the build progress on my youtube channel: https://www.youtube.com/channel/UCcT3iGeJJfpGU1QehvG48tg/videoswhere you can see the build process and full testing

Currently the project sort of works as an initial prototype, but I may come back to it and create a second version to improve the design for example with multiple web shots

If you want to see the final testing watch this video, and then below I'll put more details about the build process

So first I had to decide how the web should work and what it should be made of. I ended up with the idea of a grappling hook pretty quickly, after seeing what makers like stuff made here had come up with.

Then it was a question of 1. what material should the web be? (after some very quick testing I ended up using kevlar thread) and 2. how should I launch the grappling hook?

Rather than using compressed air I decided to make a spring loaded mechanism (I actually used a pen spring as the final one), as the grappling hook and thread would be small and light and it would be a much simpler and smaller mechanism to fit in the robot.

The firing mechanism is loaded by pushing in the hook and setting the trigger, and then released by a servo pushing the down on the trigger lever. Up/down aiming was then controlled by an additional servo

The next task was the winch and release mechanism for pulling the hook tight, climbing web and releasing at the right time in a swing.

The winch is driven through gears, and in order to release the axis on which the winch spins turns outwards, detaching it from the driving gear and allowing to slide off when there's tension on the web.

This does mean that the winch is also detached not just the web/ grapple so that might be something to improve on in the next design.

Now that I had the core mechanisms prototyped, I could move on to making the final build and adding wheel for movement, batteries, wireless controls etc.

So after modelling a design for a frame in CAD I 3d printed it, got all my parts together and did the final assembly.

In terms of the components I used, it was controlled by an arduino nano (I had been using an UNO for prototyping but the nano's smaller form factor worked far better for the final build), a HM-10 bluetooth module so I could control the robot from my phone, and a pca9685 servo driver.

So then I just had to test it, my first test being wall climbing:

And then the next being swinging. However on the first attempt despite putting down blankets to cushion it's landing the robot did fall apart a bit, but it was an easy fix

On the second swinging attempt (higher and further this time) it managed to stay in one piece so I'll call that a success, at least for this prototype

Thanks for reading! If you have any feedback or maybe ideas on how to improve the design for the next version I'd love to hear.

Go check out my youtube channel for the latest updates and my newest projects: