Use Python, OpenCV libraries and the PYNQ frame to implement the computer vision on Arty Z7-20 Xilinx Zynq SoC platform.

Use Python, Zynq and OpenCV to Implement Computer Vision

Use Python, Zynq and OpenCV to Implement Computer Vision

Use Python, OpenCV libraries and the PYNQ frame to implement the computer vision on Arty Z7-20 Xilinx Zynq SoC platform. 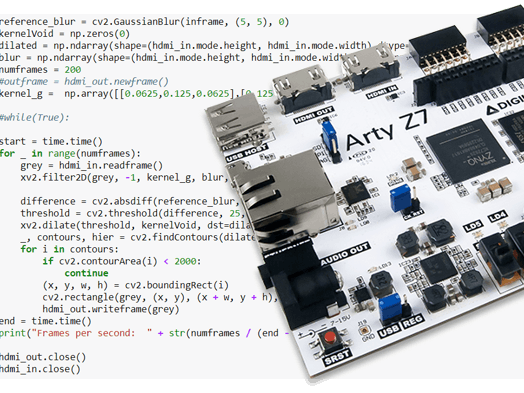 In this example, users can understand how to use OpenCV to create a simple tracking example which tracks and identifies differences between frames.

We are going to need to use Arty Z7-20 loaded with PYNQ image. You can learn how to do this through "Programming Python on Zynq FPGA"

In addition, the following parts are required.

Initially, we will use the USB web camera as the video input coupled with the HDMI output before looking at the benefits of using both HDMI in and out.

Steps in the algorithm are listed below

Step 3: Calculate the absolute difference between the reference frame and the comparison frame (cv2.absdiff)

Step 4: Create a binary image of the absolute difference (cv2.threshold)

Step 6: Find the contours within the binary image (cv2.findContours)

Step 7: If the contour area is above, a specified limit identify it as a difference and draw a box around it (cv2.contourArea,cv2.boundingRect & cv2.rectangle)

Step 8: Output the image to HDMI

The code for algorithm in the Jupyter environment is as follows.

Below is a screen capture when the algorithm is running

Screen capture when the algorithm is running

This frame rate is reasonable. However, this solution is predominantly a software solution and only uses the PYNQ hardware block for the HDMI output. In theory, we can accelerate the frame rate using a PYNQ overlay which allows us to move some of the image processing algorithms into the programmable logic (PL).

We can do this acceleration using the new computer vision overlay. It provides the following image processing functions accelerated within the programmable logic and comes all wrapped up ready for use with the PYNQ framework

Within the PL, these are implemented as shown in the diagram below.

To install the computer vision overlay, we use a PuTTY terminal connected to the PYNQ framework to download and install the packages.

In the PuTTY terminal use the following Linux commands

Once the package is installed, we can proceed to updating the algorithm.

The computer vision overlay ideally uses the HDMI input and output for the best performance. To test the result,the web camera-based approach is still applied. We update the algorithm and use the 2D filter to replace the Gaussian Blur. In addition, we use the dilation function to replace the OpenCV function.

The code is as shown below

The reason for this is because the image capture is still very software intensive. This means the color space conversion is still performed within software using OpenCV.

The best way to accelerate this is to use the HDMI input (HDMI camera) since this allows us to keep the initial stages of the processing within the programmable logic. Updating the algorithm to read in data from the HDMI in and to convert it to greyscale within the PL before using the same filters for the gaussianblur and the dilation results in the code below.

When we run this code, we receive a frame rate of

Overall, this is not a bad increase in the frame rate, and we can use these filters in the overlay to implement otherimage processing applications such as the Sobel edge detection which is very useful in industrial applications.

The Jupyter notebooks is available here. So, you can get started with this project.