Conway's Game of Life is a cellular automaton based zero player game. It can be used to create some brilliant lighting effects.

Conway's Game of Life is a cellular automaton based zero player game. It can be used to create some brilliant lighting effects. 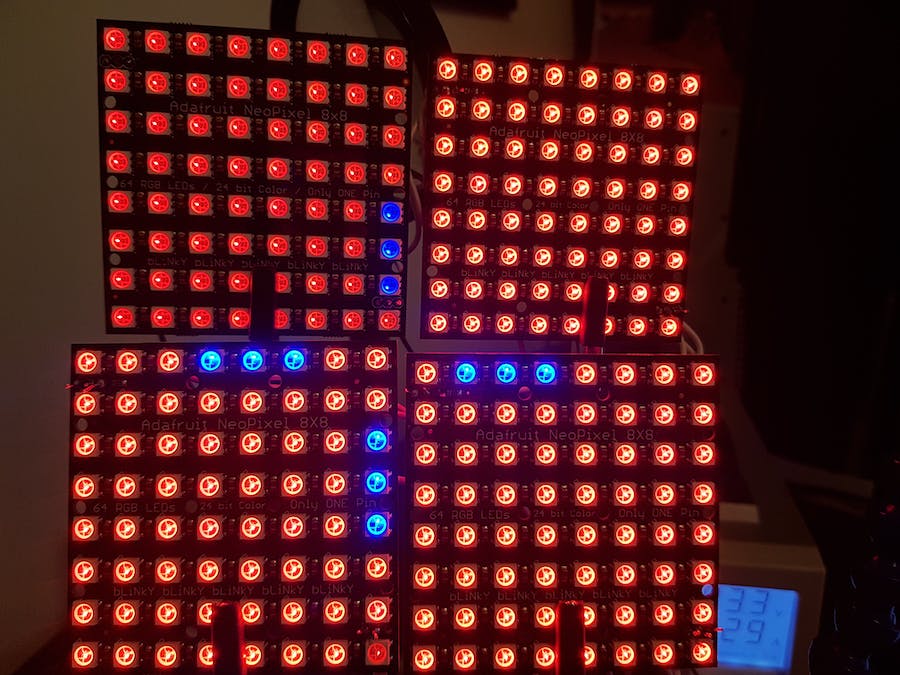 A few weeks ago I showed a project I had created to monitor the temperature in my son's bedroom. Like many toddlers he is fascinated by lights and patterns of lights.

This got me thinking to how I could create a interesting light effect for his bed room based of science and technology.

After a little consideration I decided to implement the Game of Life created by Conway in 1970. The Game of Life is a Cellular Automaton zero player game in which the player watches evolution over a number of generations.

Based on a two dimensional grid each cell within the grid lives, dies or reproduces based upon the following rules.

To display the Game of Life, it's evolution I decided to use a number of NeoPixel 8 by 8 panels. This allowed me to create a 256 pixel array on which I can display the game of life in up to 16 million colors.

The initial state from which the Game of Life runs can be anything although there are several groupings of initial settings. These include

NeoPixels are digitally controlled three color LEDs which can display up to 16 million colors thanks to there 24 bit Red Green Blue format.

Each NeoPixels output color is determined by a 24 bit serial word. What is really cool about NeoPixels is they can be daisy changed together. If a NeoPixel begins receiving another serial word within 50 microseconds it will output the previously received word to the next NeoPixel in line.

As NeoPixels provide only a serial input and output with no clock. They use a unique self-clocking, non-return-to-zero (NRZ) waveform to specify the bit values,

The timing information to drive a NeoPixel is shown below.

While the example I am creating will only use a 256 array, I want the design to scale such that it could implement much larger displays if desired.

As such the approach I decided upon is the following

The first thing we need to do in the design is create and simulate a RTL block that can drive the NeoPixel.

This module is designed to be clocked from a 20 MHz Clock, and is a simple state machine which reads the pixel value from the BRAM and outputs it to the NeoPixel.

When the timing was tested on hardware with an oscilloscope, the output timing for a one and zero are as shown below

Once the RTL file has been created the next step is to use it in the design, for which we use Vivado. Within Vivado we can add in the following elements

The hardware design will target the MiniZed development board from Avnet. This contains a single core Zynq 7007 device.

To connect the NeoPixel to the MiniZed the design uses Pmod1 and a Pmod CON1 to connect the serial input and ground. As the NeoPixels can have a significant power consumption a external power supply is used to power the pixel array.

Each of the individual LEDs in a NeoPixel requires a maximum current of 20mA. There are three LED’s in each NeoPixel, hence each RGB pixel requires 60mA.

As we have potentially up to 256 NeoPixels powered at one we need to have a considerable power supply. With all LED's showing displaying just one color we would need a power supply solution capable of providing 5.12 Amps while if we want to use multiple LEDs we will need to be able to supply up to 15.36 Amps (which is considerable)

The software design is modular and works on a defined grid to which we can add in initial states. e.g. Glider or Exploder.

The architecture is this based on the following functions

To ensure we can observe the updates to each generation I timed the design to generate a new evolution about once every 2.5 seconds

The code to determine the next generation works in two for loops one for each dimension of the array. While inside the inner loop, another two loops are used to determine the number of pixels which are alive near the currently examined pixel.

All of this is performed within the next generation function, alive of dead bits are represented by a single bit within the 2D array.

It is the load BRAM function which assigns the colors to the pixels in the NeoPixel Array.

The design has neo pixel panels to integrate, giving us a total of 256 pixels to create our game of life. Each NeoPixel array has a Data In and Data Out connections, these enable us to daisy chain the NeoPixel arrays together.

Once all four panels were connected together, the next step was to ensure the power architecture is sufficient. For testing I used a bench power supply capable of providing the current required to power the NeoPixel arrays while the MiniZed is powered by the USB connector. To ensure the data signal is correctly received the the ground reference is connected between the Pmod CON1 and the bench PSU.

PSU powering the NeoPixel with the first Glider

Once the four panels are constructed I wanted to be able to check that my mapping to each of the NeoPixels in software was correct. To do this in the initial grid I set the outer four corners to be on, along with the middle four LEDS. At the same time each panel had a Blinker running it.

When I put this all together I recorded the video below

To mount the four NeoPixel arrays in a grid I will use a 3D printer to create a simple, frame which will hold the four Neo Pixel Arrays. However first I need to buy the printer!

Further Work - Control the MiniZed over Wifi for the initial state