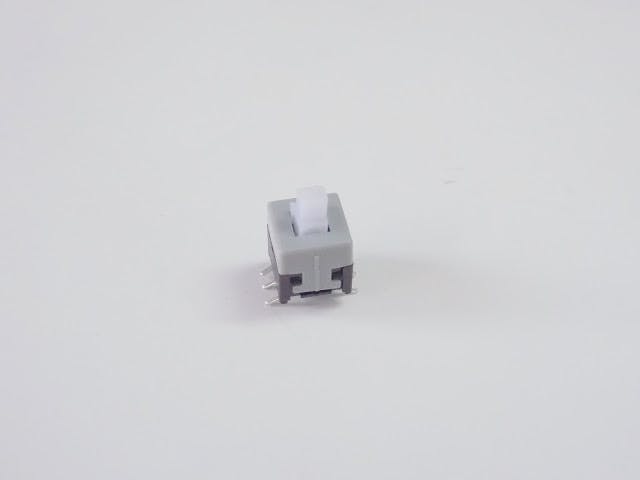 A 6 Pin Push Switch also known as Mini DPDT Push Switch, is nothing but a combination of two push switches placed together inside one package. Unlike momentary switches which connect the wires of the switch only for a second, this switch retains its ON-OFF state till pushed later on. For example, if I push it once so that it’s turned on, it will remain in ON state till it’s pushed again. That’s why this switch is useful in controlling power connections most of the time.

Now back onto its features. It has two common ports which are independent of each other and have no connection between them at all, which means you can switch two different wires easily through it.

If you refer to this pin diagram:

You can easily interpret that this switch has two common pins which are simultaneously switched ON and OFF.

When the trigger is pushed and moves down a notch, the connections between Pin 1 to Pin 2 and Pin 5 to Pin 6 are made. This is the ON state of the switch.

When the trigger is pushed again, it regains its previous position, the connections between Pin 2 to Pin 3 and Pin 5 to Pin 4 are made. This is the OFF state of the switch.

That’s all for this switch. If you’re curious about its usage, you can visit these instructables where I made a project based on it:

Thanks for reading. If you liked this post, please consider supporting me on Patreon.

Thanks to Ashish Choudhary for lending his camera.

4 projects • 3 followers
I am a 18 years old sophomore,have been making stuff for half a decade now. I got started in hardware by making circuits as a hobby.
ContactContact