The Chrome dinosaur game that is now on an Arduino LCD shield!

The Chrome Dino Game on an LCD Shield

The Chrome Dino Game on an LCD Shield

The Chrome dinosaur game that is now on an Arduino LCD shield! 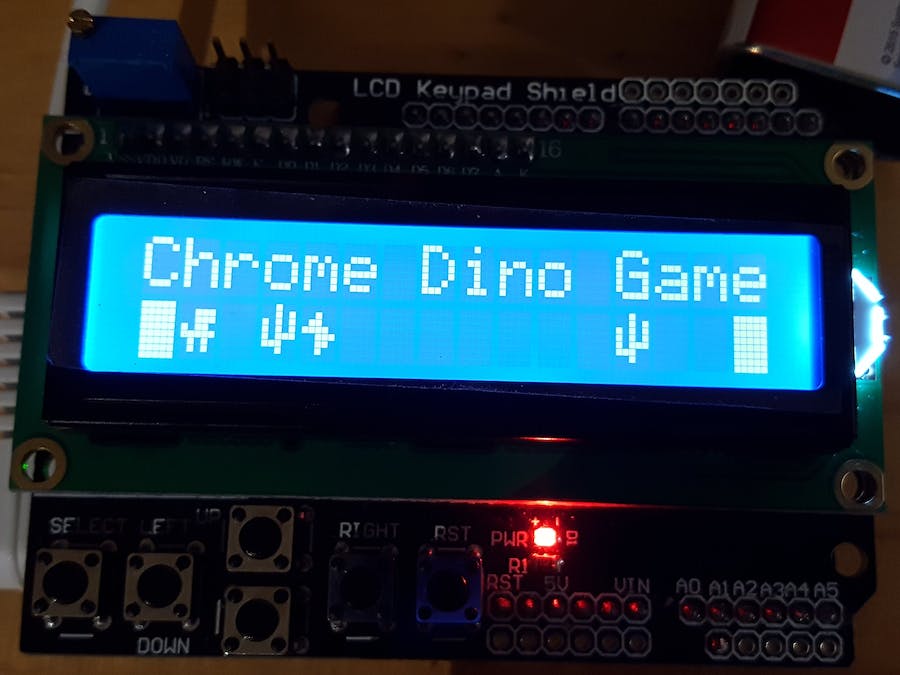 Somehow, I am very bad at coming up with ideas.

But anyway, I was browsing the Project Hub and I found this project. It was a great project!

But I still made my own version in Arduino C because 1. I wanted to make something and 2. I don't want to download another thing on my computer.

(I still would highly recommend checking it out! Link is here!)

Here are some pictures:

How the Code Works

First, I include all of the necessary libraries and the bitmaps. Then, I define an object called lcd. I define a bunch of variables and #defines. Then I write an array as a buffer for holding what goes on the screen. Then I define more variables.

Then setup starts. I do all of the necessary stuff, like creating the characters and showing the splash screen.

We have loop next. I define some timing variables, like in blinkwithoutdelay. I do the check if the time has passed long enough. Then, I use the random function to decide when and what to put in the buffer. After that, I shift all of the elements in the buffer down one using a for loop. Then it checks whether to add the score or not because as I said earlier, when you are jumping you cannot get any points.

Then I draw the barriers next, as you see the blocks bitmap.

Then I check whether the SELECT (jump) button is pressed. It then modifies the buffer to show whether the dinosaur is jumping or not.

The next code checks whether dinosaur has been airborne long enough so that the dinosaur can come down.

This is where the code checks whether there is an obstacle in the way.

If the dinosaur didn't crash, then the Arduino updates the lcd and prints the score. Else, it shows the death screen.

Then the final code is not required-it blinks the LED. If you are having problems with timing, then you could remove/comment the blink code out.

Last, the Arduino build process includes the Functions tab at the end of the sketch for us. This includes lots of functions that are used throughout the code.