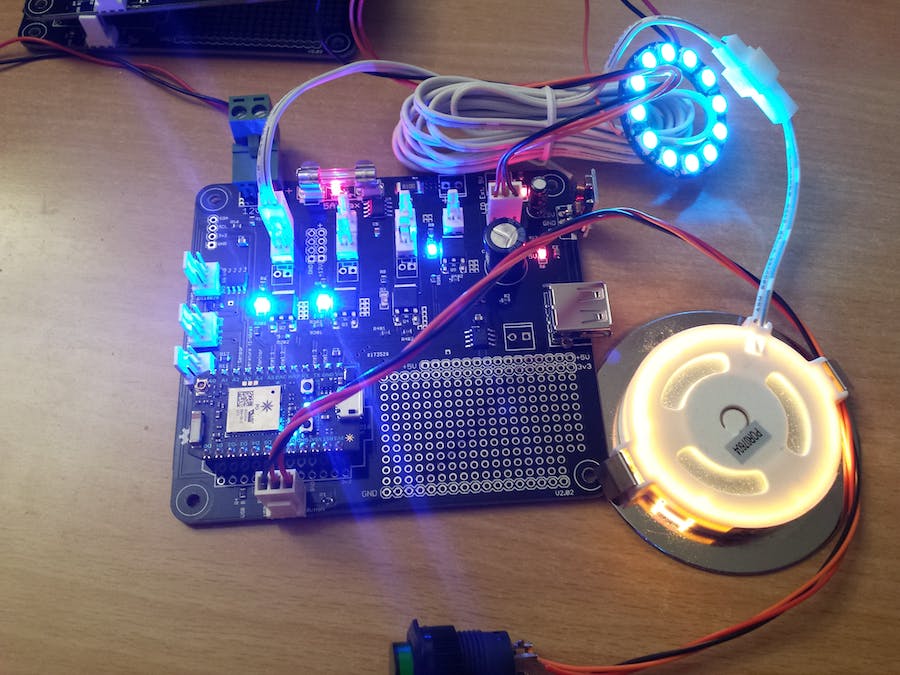 I recently upgraded my kitchen lighting from high power halogen lights to nice low power 12V DC LED lighting and I want to control those gracefully, not with a stack of plug-in mains relay modules as I had previously (and sadly is often the only choice).

I also wanted some built-in intelligence and sensors, lots of sensors! I have 3 separate areas (sink, cooker and microwave area) that want to be controlled as one or separately, as well individual control of four possible light sets per area (over cabinet, under cabinet, white LED strip and UV strips for added silliness. Sorry, to kill the germs).

Only one thing for it! A custom PCB with a Particle Photon on-board, some big FETs and lots of other goodies!

Presented here is my 3rd version of that board. I've found the PCB really useful, not just for my kitchen lighting but for controlling UV exposure boxes (more on that in another Hackster project), prototype and a few other things. I'm sharing this project as you may find the design useful as well.

Construction is fairly simple. PCB's are available at DirtyPCBs. All the components are reasonably easy to solder by hand with a little experience (and a solder wick), but if you plan on making more than one get a stencil made from DirtyPCBs or OSH Stencils.

Checking the solder after using a stencil

For hand and reflow soldering, fit the smallest components first (resistors, SMD capacitors, LEDs - watch the polarity, temperature sensor, USB switch IC). For reflow soldering, put the PCB in the reflow oven or heat with a hot air gun to get a good flow.

Moving on to the through hole components. I found it easiest to fit the 2 and 3 pin connectors first, get a sponge bigger than the PCB, put the connectors in, place the sponge on top, invert the board keeping pressure between the PCB and sponge, then gently tack 1 pin of each connector.

Flip the board back. Now you can go through each of those joints, melt the solder on the one pin, the let the connector come loose and then press it squarely into place, so that you have a nice professional looking PCB.

Single pin tacked - before squaring up the connectors, they look horrible.
And after... OCD in its place!

Use a Photon to hold the sockets in-place whilst you tack a couple of pins either side, flip the board and make sure it's square, solder a couple more pins then remove the Photon to save overheating it and solder the rest of the photon socket.

Fit the remaining components as desired (if you don't want the 5V USB, don't fit that, etc).

The design uses a 7805 regulator, I prefer the DC-DC buck converters (7805 drop-in replacements readily available on eBay). Make sure they are set to 5V before you fit it. A regular 7805 gets warm dropping 12V to 5V for the Photon, so fit a heat sink if you use one.

Watch out for the polarity of the NeoPixel connector. On PCB Version 2.03 (5 Feb 2016), I rotated the connector but not the silk screen, so +Ve is actually -Ve. I've popped a couple of NeoPixels because of that!

Also watch out for the polarity of the power connector. This board has no protection against reverse polarity, so it's possible to do a lot of damage if you put the power in the wrong way around.

I have the channels wired as:

The main application loop just checks for a button press or the PIR being triggered. For either, a desired state is set based on the current state (Off -> Dim -> On -> Off), as well as gradual dimming of the lights if triggered by the button press.

The button LED (D7 on the photon, pin 3 on JP34) can give 3.3V @25mA from the photon. This is used to light a LED on the button, it is switched off during processing of the loop and on again at the end to help catch bugs in the loop code. It can also be used as in the video at the end to power a hall effect device rather than a button.

Whilst it's possible to link a PIR sensor and other goodness to the PCB, it is much better nicer to use it as part of a bigger automation system, and this is where SmartThings comes in. You can add the controller as a SmartThings device (or device type) and control the lights from your phone.

Connect up to Tinamous

In addition to controlling your lights through SmartThings, you might also like to track light usage, temperature, power consumption as well as potential sensor data through Tinamous.

You can also control your lighting via Tinamous, either manually from the device page or as part of a notification that is set to call a Particle method.

For example, with a notification you could have it trigger on a status message of, "It's dark" or "I'm home" from one of your other devices or members and have the kitchen lights come on automatically.

Here's a non-kitchen version using a hall effect sensor to toggle states for running UV lights, a fan and some NeoPixels (more on this in another project).

And version 2.00 (an intermediate version) with more prototype area: