"Get to the Choppa!"

"Get to the Choppa!" 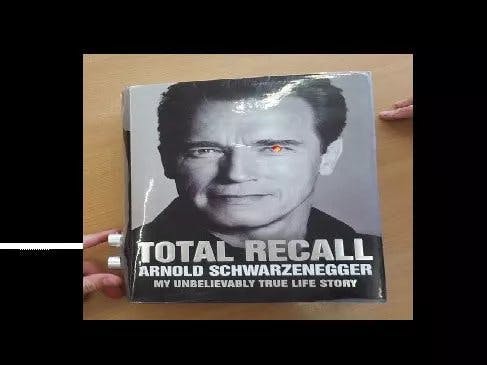 I asked my Raspberry Pi club what they wanted to create and they said a book that talks to you. Not in the conventional way of reading to you, but in a way to get your attention, to call you over and shout at you. Even better if the book was Arnold Schwarzenegger's autobiography and he tells you to get you to 'get to the chopper now!'

Get to the Choppa!

The first part of the hack is to wire up a Distance Sensor to measure how far away a potential reader is.  As they move nearer, Arnie says various phrases to attract their attention.

This is a smart Python library that makes interaction with the GPIO pins really simple, you can find out more here

Control the eye LED with the simple code:

To enable Arnie to talk, record some classic phrases and convert them to MP3 files. (Although I was told I sound like Kermit the frog! which is not a good sound)

To play an mp3 use the code

Arnie was the Terminator and therefore he does not like being ignored.  If you do not follow his instructions his eye will glow red, he is angry, better leave the building fast.

The book is on the shelf and Arnie asks you to pick it up, if you do then he responds with a new set of instructions.  To identify when book has been lifted off the shelf use a

This component enables you to measure a turn, for example the book position turning from upright, on the shelf to off the shelf and flat in your hand.

It consist of two simple contacts and a small ball bearing.  As you tilt the switch the ball bearing moves and connects with the contacts.  This gives you four 'states',  (1 and 1, 1 and 0, 0 and 1 and finally 0 and 0. ) which can be coded to respond.

One of my students gave me a 'spare' book which her Dad no longer wanted, it was Arnie's autobiography and set the tone for the hack.  Several holes were drilled into the side of the book for the Distance Sensor and one hole on the front for the LED to poke through as an eye.  A rectangle was cut into around 300 pages to make space to hide the RaspPi and battery.

Using a Pi3 means that the required Bluetooth hardware is already available.  The latest OS image Jessie also contains the required drivers and a software interface.  Set is easy, just pair with the device however, I found that mpg321 would not play through the speakers.  I tried PyGame and at this point June 2016 that does not stream music either.  The good news is that VLC player works!

and then in Python use