Generates maps based on distance between itself and obstacles autonomously and provides visual feedback.

Generates maps based on distance between itself and obstacles autonomously and provides visual feedback. 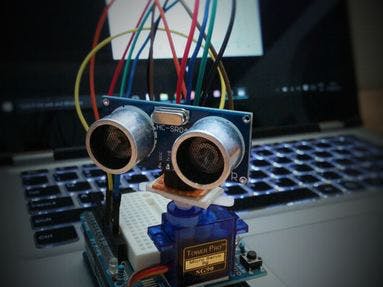 In this project, we are using an ultrasonic Distance sensor. It generates sound waves beyond the scope of human hearing and measures distance by calculating the time required by these waves to hit an obstacle and travel back. This is similar to the principle used by bats and cruise ships.

Another component that we are going to use is a servo motor. It differs from the usual DC motor in that it can turn very precisely to a given angular position and hold its state there. When a servo motor is given pulses of a specific duration, it moves to the corresponding angular position.

We will be using both these components to get a 180 degree field of view for our robot.

This project uses the following hardware

Using a small piece of general purpose PCB, make a small header for the HC-04, and attach it to a servo horn using a piece of double sided tape.

This step is optional, but to make the system more compact, I've attached the servo to the jutting part of the protoboard shield using double sided tape as well.

The Arduino code controls the motion of the servo motor, and when the readings from the ultrasonic sensor are captured and how frequently. It also pushes the sensor data to the serial port.

The MatLab code deals more with data than the actual control of the board, so all the sensor data is pushed over serial to the PC, where it is read by MatLab.

So the MatLab code does just this. It gets data serially from the COM port, saves it into a matrix with the angle of rotation, and then converts it into Cartesian coordinates with the formula given above.

Once it's done, it gives an output by plotting the points on a graph. I placed the board in the box, and I got the following result.

When placed in a rectangular box

Although the system isn't perfect, it gets the job done. It can get a rough estimate of the box width and length and sends the data accurately.

The only errors that I can see at the moment are due to the shaking of the sensor while the servo is moving and faulty readings from the sensor itself.

Apart from this, the system works fine and can be used for depth perception experiments as well as basic computer vision projects.

6 projects • 62 followers
I have an active interest in IoT, Wireless Sensor Networks, Single Board Computing Implementations, Embedded Systems, and Robotics.
ContactContact
Thanks to Arduino "having11" Guy.