The WisLink development board is based on Quectel's next-generation BG96 IoT module.

Getting Started with WisLink Cellular

Getting Started with WisLink Cellular

The WisLink development board is based on Quectel's next-generation BG96 IoT module. 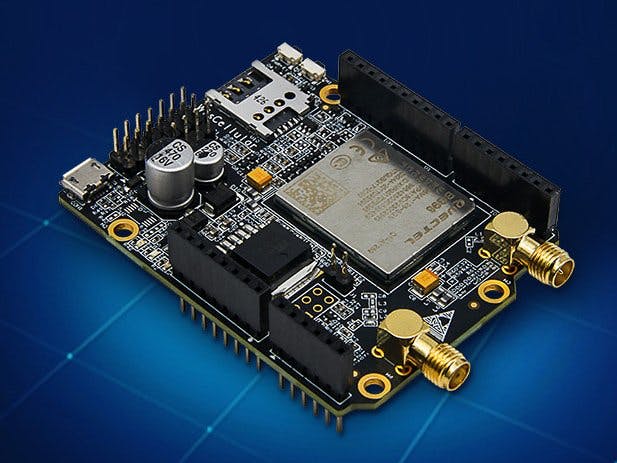 Cellular IoT is a way of connecting physical things (like sensors) to the internet by having them piggyback on the same mobile networks as smartphones. Its infrastructural simplicity combined with the dawn of 5G position cellular IoT as a strong player in the connectivity space.

LTE-M, which stands for “Long Term Evolution for Machines, ” is a network standard that allows IoT devices to piggyback on existing cell networks. With essentially just a software update, LTE-M-enabled devices can communicate with the cloud, surfing the same waves as the cat photos you’re liking on Instagram. In general, LTE-M devices are best suited to “mission-critical” applications in which real-time data transfer makes the difference—for example, self-driving cars or emergency devices in smart cities.

NB-IoT, which stands for “Narrowband-IoT, ” is great for areas without good LTE coverage, or when you only need to transfer small amounts of information—for example, when using a soil sensor for smart agriculture or an energy usage monitor in a smart city. NB-IoT uses only a narrow band of the total bandwidth cell towers project. If you’re deploying in an area in which GSM is the standard cellular technology—specifically, Europe and developing parts of Africa and Asia—or, on the other hand, if you foresee needing to send only small amounts of data across the internet periodically, NB-IoT might be right for you.

Built-in tri-mode cellular network support allows IoT developers to jump start deployment of IoT applications with 2G/EGPRS network that is mature and widely available to seamlessly migrate to 4G/LTE Cat-M1 (eMTC), Cat-NB1 (NB-IoT) networks that are being deployed and maturing access the globe without any hardware chance.

WisLink Cellular BG96 Arduino Shield has two push buttons to allow the user to power on/off and reset the board:

And I was using the Hologram with the WisCellular through this Tutorial.

Every SIM card has an 18-22 digit unique ID printed on it. Enter your SIM’s ID in the activation form. and you can skip the payment options and activate your sim.

Note :- You can use any cellular sim to follow this guide.

So now we have a great Shield in our hand powered with Cellular Connectivity, we can start with some AT Commands before getting to start actual programming

What are AT commands?

And our WisCellular Shield have some set of AT Commands to talk with the hardware, and actually we are using BG96 AT Commands.

There is two way we use it, one way with Arduino, Wis as a Shield and another way is as a standalone with Quectel developer tools like QCOM, QNavigator..etc

QCOM is here for perform the AT Commands to test the devices functions and it's developed by Quectel.

and you can see the available networks I have.

and I connected to the Vodafone network with Hologram SIM

QNavigator tool is only used to test Quectel modules. By using this tool, you can be familiar with theworking process of main functions like Call, SMS, TCP/UDP, PPP and QuceLocator even when you do not know any AT commands.

I believe you understand the basics AT commands and tools for the Wis Link, now we can move to programming. we can Program the WisLinkShield in different ways, some of them listed below.

Arduino is an open-source electronics platform based on easy-to-use hardware and software. WisLink is Compatible with various Arduino Development boards

this code will help us to send AT commands using and Arduino serial and Receive feedback and information from the device, upload this code and open arduino serial monitor on 115200 buad rate

After uploading the code open your Serial Monitor and you can send the AT commands through the textbox on the top, and please check buad rate is same as your programe, here mine is 115200 bps

RAKWireless also developed library to make our development easy with the WisLink and arduino. it's available in GitHub : https://github.com/RAKWireless/WisLTE_Arduino

so go and download it in your arduino IDE.