Measurement of the oxygen saturation in the bloodstream as well as the heart rate and a pedometer. The data will be sent to a Android app.

Measurement of the oxygen saturation in the bloodstream as well as the heart rate and a pedometer. The data will be sent to a Android app. 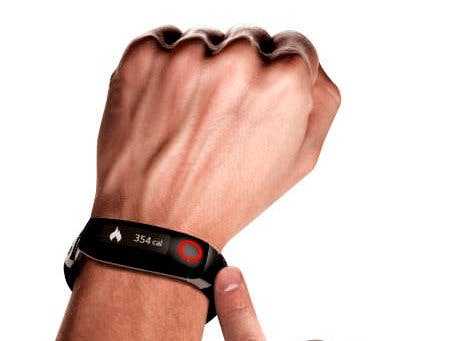 This project presents the design and implementation of an electronic instrument which measures the oxygen saturation in the bloodstream of a human finger. In order to get this aim, pulse oximetry and photoplethysmography processing methods are used. The project depicts the fundamental principles. It continues with the development steps of the device which is built using a System on Chip architecture. Furthermore, the oxygen saturation measurement is implemented in a prototype, as well as the heart rate measurement and the pedometer. Besides this, a Bluetooth communication has been installed whereby data is sent to a mobile device. Data is displayed in an Android application. Finally, a last prototype is designed that is aimed to a wristband integration which would be a final wearable system.

The Internet of Things (IoT) is one of the major communication advances in present time that links the internet with everyday sensors and working devices for an all. IoT is changing the traditional medicine. The hospital-centered system of the traditional medicine is turning into a person-centered environment by relying on the mobile devices as a medium of sensing, interaction, and communication. Although smartphones are embedded with an array of sensors, these devices still lack the capability of collect fine-grain information of a user’s bodily health. A wide range of wearable devices has recently developed to extend the capabilities of mobile devices.

Wearable devices are key for the telemedicine, obtaining information of the health of the person and sending it to a doctor who makes a diagnosis. In this project a wearable device for the measurement of oxygen saturation on the blood and the heart rate is developed, sending the data to an Android Smartphone.

The aim of this project is the measurement of the oxygen saturation (SpO2) with a non-invasive method. SpO2 can be estimated with the photo-plethysmography. In the blood there is a molecule, called hemoglobin (Hb), which carry the oxygen to the body cells. Hemoglobin is ben to 4 molecules of oxygen, forming the oxyheglobin (HbO2). Hb and HbO2 have a different behavior when they are influenced by waves with different wavelength (Figure 1).

Emitting light in the red an infrared wavelength and acquiring the light reflected for the body and obtaining an electrical signal (photo-plethysmography) (Figure 2) SpO2 can be estimated with equation 1:

In the project the CNY70, which has an infrared LED and a phototransitor, and a red LED is used for obtain the photoplethysmography signals of the 2 wavelengths. The signals are amplified and filtered (Figure 3) in the PSoC of Cypress with a TIA and a digital filter block. A 6-order low-pass filter is implemented for reduce the 50 Hz and 100 Hz. SpO2 and heart rate is obtained processing the signals filtered.

The data is sent throw Bluetooth with the HC-06 module, and displayed in a Android App (Figure 4).

We made a prototype with the PSoC 5 CY8CKIT-010 kit (Figure 5), adding a lithium battery and a charge system.

A prototype for a wristband is designed including de system and the PSoC in the same device (Figure 7).